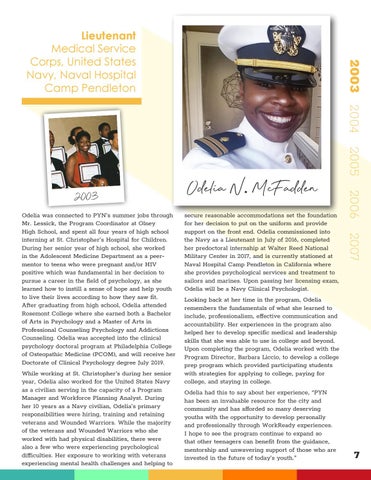 2003 Odelia was connected to PYN’s summer jobs through Mr. Lessick, the Program Coordinator at Olney High School, and spent all four years of high school interning at St. Christopher’s Hospital for Children. During her senior year of high school, she worked in the Adolescent Medicine Department as a peermentor to teens who were pregnant and/or HIV positive which was fundamental in her decision to pursue a career in the field of psychology, as she learned how to instill a sense of hope and help youth to live their lives according to how they saw fit. After graduating from high school, Odelia attended Rosemont College where she earned both a Bachelor of Arts in Psychology and a Master of Arts in Professional Counseling Psychology and Addictions Counseling. Odelia was accepted into the clinical psychology doctoral program at Philadelphia College of Osteopathic Medicine (PCOM), and will receive her Doctorate of Clinical Psychology degree July 2019. While working at St. Christopher’s during her senior year, Odelia also worked for the United States Navy as a civilian serving in the capacity of a Program Manager and Workforce Planning Analyst. During her 10 years as a Navy civilian, Odelia’s primary responsibilities were hiring, training and retaining veterans and Wounded Warriors. While the majority of the veterans and Wounded Warriors who she worked with had physical disabilities, there were also a few who were experiencing psychological difficulties. Her exposure to working with veterans experiencing mental health challenges and helping to

Odelia N. McFadden secure reasonable accommodations set the foundation for her decision to put on the uniform and provide support on the front end. Odelia commissioned into the Navy as a Lieutenant in July of 2016, completed her predoctoral internship at Walter Reed National Military Center in 2017, and is currently stationed at Naval Hospital Camp Pendleton in California where she provides psychological services and treatment to sailors and marines. Upon passing her licensing exam, Odelia will be a Navy Clinical Psychologist.

Looking back at her time in the program, Odelia remembers the fundamentals of what she learned to include, professionalism, effective communication and accountability. Her experiences in the program also helped her to develop specific medical and leadership skills that she was able to use in college and beyond. Upon completing the program, Odelia worked with the Program Director, Barbara Liccio, to develop a college prep program which provided participating students with strategies for applying to college, paying for college, and staying in college. Odelia had this to say about her experience, “PYN has been an invaluable resource for the city and community and has afforded so many deserving youths with the opportunity to develop personally and professionally through WorkReady experiences. I hope to see the program continue to expand so that other teenagers can benefit from the guidance, mentorship and unwavering support of those who are invested in the future of today’s youth.”