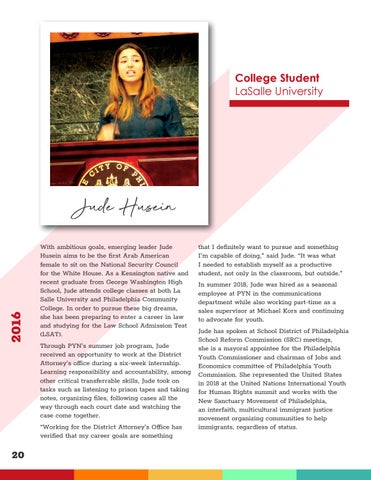 Jude Husein With ambitious goals, emerging leader Jude Husein aims to be the first Arab American female to sit on the National Security Council for the White House. As a Kensington native and recent graduate from George Washington High School, Jude attends college classes at both La Salle University and Philadelphia Community College. In order to pursue these big dreams, she has been preparing to enter a career in law and studying for the Law School Admission Test (LSAT). Through PYN’s summer job program, Jude received an opportunity to work at the District Attorney’s office during a six-week internship. Learning responsibility and accountability, among other critical transferrable skills, Jude took on tasks such as listening to prison tapes and taking notes, organizing files, following cases all the way through each court date and watching the case come together. “Working for the District Attorney’s Office has verified that my career goals are something

that I definitely want to pursue and something I’m capable of doing,” said Jude. “It was what I needed to establish myself as a productive student, not only in the classroom, but outside.” In summer 2018, Jude was hired as a seasonal employee at PYN in the communications department while also working part-time as a sales supervisor at Michael Kors and continuing to advocate for youth. Jude has spoken at School District of Philadelphia School Reform Commission (SRC) meetings, she is a mayoral appointee for the Philadelphia Youth Commissioner and chairman of Jobs and Economics committee of Philadelphia Youth Commission. She represented the United States in 2018 at the United Nations International Youth for Human Rights summit and works with the New Sanctuary Movement of Philadelphia, an interfaith, multicultural immigrant justice movement organizing communities to help immigrants, regardless of status.