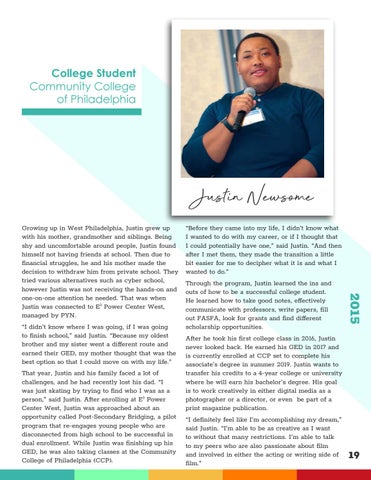 “I didn’t know where I was going, if I was going to finish school,” said Justin. “Because my oldest brother and my sister went a different route and earned their GED, my mother thought that was the best option so that I could move on with my life.” That year, Justin and his family faced a lot of challenges, and he had recently lost his dad. “I was just skating by trying to find who I was as a person,” said Justin. After enrolling at E3 Power Center West, Justin was approached about an opportunity called Post-Secondary Bridging, a pilot program that re-engages young people who are disconnected from high school to be successful in dual enrollment. While Justin was finishing up his GED, he was also taking classes at the Community College of Philadelphia (CCP).

“Before they came into my life, I didn’t know what I wanted to do with my career, or if I thought that I could potentially have one,” said Justin. “And then after I met them, they made the transition a little bit easier for me to decipher what it is and what I wanted to do.” Through the program, Justin learned the ins and outs of how to be a successful college student. He learned how to take good notes, effectively communicate with professors, write papers, fill out FASFA, look for grants and find different scholarship opportunities.

Growing up in West Philadelphia, Justin grew up with his mother, grandmother and siblings. Being shy and uncomfortable around people, Justin found himself not having friends at school. Then due to financial struggles, he and his mother made the decision to withdraw him from private school. They tried various alternatives such as cyber school, however Justin was not receiving the hands-on and one-on-one attention he needed. That was when Justin was connected to E3 Power Center West, managed by PYN.

After he took his first college class in 2016, Justin never looked back. He earned his GED in 2017 and is currently enrolled at CCP set to complete his associate’s degree in summer 2019. Justin wants to transfer his credits to a 4-year college or university where he will earn his bachelor’s degree. His goal is to work creatively in either digital media as a photographer or a director, or even be part of a print magazine publication. “I definitely feel like I’m accomplishing my dream,” said Justin. “I’m able to be as creative as I want to without that many restrictions. I’m able to talk to my peers who are also passionate about film and involved in either the acting or writing side of film.”