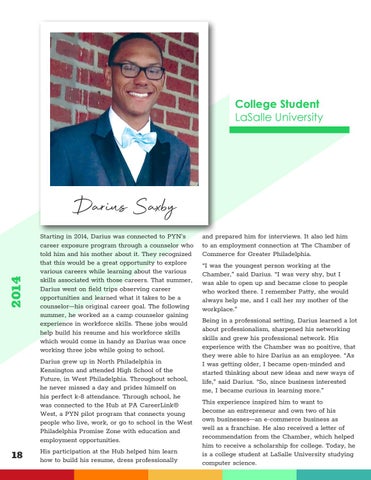 Darius Saxby Starting in 2014, Darius was connected to PYN’s career exposure program through a counselor who told him and his mother about it. They recognized that this would be a great opportunity to explore various careers while learning about the various skills associated with those careers. That summer, Darius went on field trips observing career opportunities and learned what it takes to be a counselor—his original career goal. The following summer, he worked as a camp counselor gaining experience in workforce skills. These jobs would help build his resume and his workforce skills which would come in handy as Darius was once working three jobs while going to school. Darius grew up in North Philadelphia in Kensington and attended High School of the Future, in West Philadelphia. Throughout school, he never missed a day and prides himself on his perfect k-8 attendance. Through school, he was connected to the Hub at PA CareerLink® West, a PYN pilot program that connects young people who live, work, or go to school in the West Philadelphia Promise Zone with education and employment opportunities.

His participation at the Hub helped him learn how to build his resume, dress professionally

and prepared him for interviews. It also led him to an employment connection at The Chamber of Commerce for Greater Philadelphia. “I was the youngest person working at the Chamber,” said Darius. “I was very shy, but I was able to open up and became close to people who worked there. I remember Patty, she would always help me, and I call her my mother of the workplace.” Being in a professional setting, Darius learned a lot about professionalism, sharpened his networking skills and grew his professional network. His experience with the Chamber was so positive, that they were able to hire Darius as an employee. “As I was getting older, I became open-minded and started thinking about new ideas and new ways of life,” said Darius. “So, since business interested me, I became curious in learning more.” This experience inspired him to want to become an entrepreneur and own two of his own businesses—an e-commerce business as well as a franchise. He also received a letter of recommendation from the Chamber, which helped him to receive a scholarship for college. Today, he is a college student at LaSalle University studying computer science.