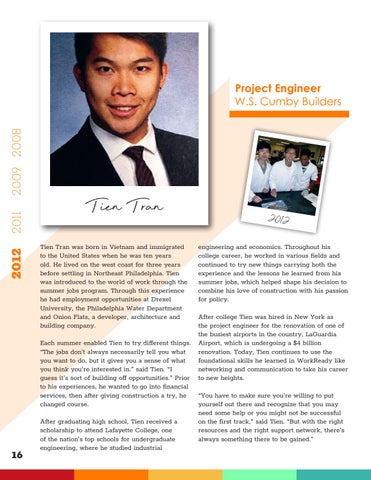 Tien Tran Tien Tran was born in Vietnam and immigrated to the United States when he was ten years old. He lived on the west coast for three years before settling in Northeast Philadelphia. Tien was introduced to the world of work through the summer jobs program. Through this experience he had employment opportunities at Drexel University, the Philadelphia Water Department and Onion Flats, a developer, architecture and building company.

2012 engineering and economics. Throughout his college career, he worked in various fields and continued to try new things carrying both the experience and the lessons he learned from his summer jobs, which helped shape his decision to combine his love of construction with his passion for policy.

After college Tien was hired in New York as the project engineer for the renovation of one of the busiest airports in the country, LaGuardia Each summer enabled Tien to try different things. Airport, which is undergoing a $4 billion “The jobs don’t always necessarily tell you what renovation. Today, Tien continues to use the you want to do, but it gives you a sense of what foundational skills he learned in WorkReady like you think you’re interested in.” said Tien. “I networking and communication to take his career guess it’s sort of building off opportunities.” Prior to new heights. to his experiences, he wanted to go into financial services, then after giving construction a try, he “You have to make sure you’re willing to put changed course. yourself out there and recognize that you may need some help or you might not be successful After graduating high school, Tien received a on the first track,” said Tien. “But with the right scholarship to attend Lafayette College, one resources and the right support network, there’s of the nation’s top schools for undergraduate always something there to be gained.” engineering, where he studied industrial