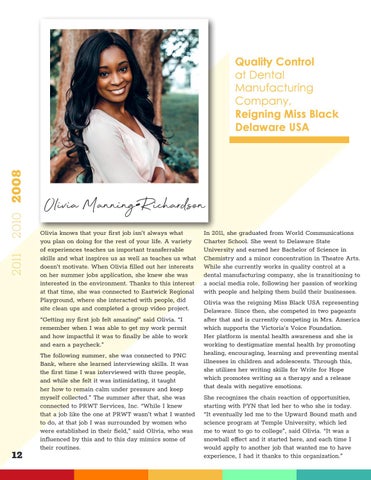 Olivia Manning-Richardson Olivia knows that your first job isn’t always what you plan on doing for the rest of your life. A variety of experiences teaches us important transferrable skills and what inspires us as well as teaches us what doesn’t motivate. When Olivia filled out her interests on her summer jobs application, she knew she was interested in the environment. Thanks to this interest at that time, she was connected to Eastwick Regional Playground, where she interacted with people, did site clean ups and completed a group video project. “Getting my first job felt amazing!” said Olivia. “I remember when I was able to get my work permit and how impactful it was to finally be able to work and earn a paycheck.”

The following summer, she was connected to PNC Bank, where she learned interviewing skills. It was the first time I was interviewed with three people, and while she felt it was intimidating, it taught her how to remain calm under pressure and keep myself collected.” The summer after that, she was connected to PRWT Services, Inc. “While I knew that a job like the one at PRWT wasn’t what I wanted to do, at that job I was surrounded by women who were established in their field,” said Olivia, who was influenced by this and to this day mimics some of their routines.

In 2011, she graduated from World Communications Charter School. She went to Delaware State University and earned her Bachelor of Science in Chemistry and a minor concentration in Theatre Arts. While she currently works in quality control at a dental manufacturing company, she is transitioning to a social media role, following her passion of working with people and helping them build their businesses. Olivia was the reigning Miss Black USA representing Delaware. Since then, she competed in two pageants after that and is currently competing in Mrs. America which supports the Victoria’s Voice Foundation. Her platform is mental health awareness and she is working to destigmatize mental health by promoting healing, encouraging, learning and preventing mental illnesses in children and adolescents. Through this, she utilizes her writing skills for Write for Hope which promotes writing as a therapy and a release that deals with negative emotions. She recognizes the chain reaction of opportunities, starting with PYN that led her to who she is today. “It eventually led me to the Upward Bound math and science program at Temple University, which led me to want to go to college”, said Olivia. “It was a snowball effect and it started here, and each time I would apply to another job that wanted me to have experience, I had it thanks to this organization.”