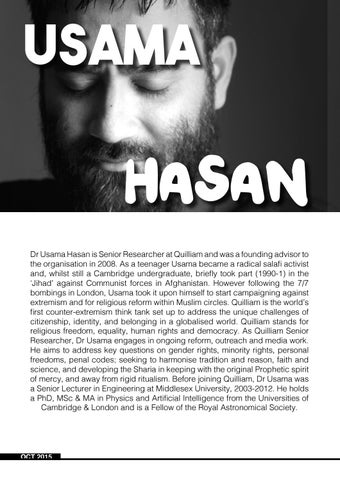 HASAN Dr Usama Hasan is Senior Researcher at Quilliam and was a founding advisor to the organisation in 2008. As a teenager Usama became a radical salafi activist and, whilst still a Cambridge undergraduate, briefly took part (1990-1) in the ‘Jihad’ against Communist forces in Afghanistan. However following the 7/7 bombings in London, Usama took it upon himself to start campaigning against extremism and for religious reform within Muslim circles. Quilliam is the world’s first counter-extremism think tank set up to address the unique challenges of citizenship, identity, and belonging in a globalised world. Quilliam stands for religious freedom, equality, human rights and democracy. As Quilliam Senior Researcher, Dr Usama engages in ongoing reform, outreach and media work. He aims to address key questions on gender rights, minority rights, personal freedoms, penal codes; seeking to harmonise tradition and reason, faith and science, and developing the Sharia in keeping with the original Prophetic spirit of mercy, and away from rigid ritualism. Before joining Quilliam, Dr Usama was a Senior Lecturer in Engineering at Middlesex University, 2003-2012. He holds a PhD, MSc & MA in Physics and Artificial Intelligence from the Universities of Cambridge & London and is a Fellow of the Royal Astronomical Society.