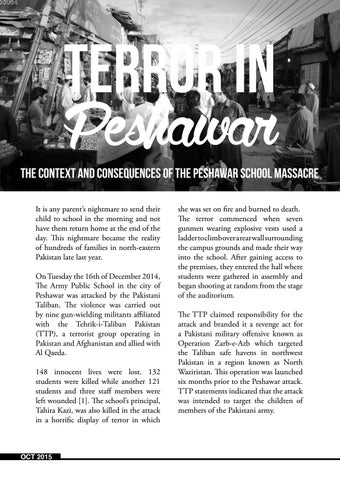 Peshawar The Context and Consequences of the Peshawar School Massacre It is any parentâ&#x20AC;&#x2122;s nightmare to send their child to school in the morning and not have them return home at the end of the day. This nightmare became the reality of hundreds of families in north-eastern Pakistan late last year. On Tuesday the 16th of December 2014, The Army Public School in the city of Peshawar was attacked by the Pakistani Taliban. The violence was carried out by nine gun-wielding militants affiliated with the Tehrik-i-Taliban Pakistan (TTP), a terrorist group operating in Pakistan and Afghanistan and allied with Al Qaeda. 148 innocent lives were lost. 132 students were killed while another 121 students and three staff members were left wounded [1]. The schoolâ&#x20AC;&#x2122;s principal, Tahira Kazi, was also killed in the attack in a horrific display of terror in which

she was set on fire and burned to death. The terror commenced when seven gunmen wearing explosive vests used a ladder to climb over a rear wall surrounding the campus grounds and made their way into the school. After gaining access to the premises, they entered the hall where students were gathered in assembly and began shooting at random from the stage of the auditorium. The TTP claimed responsibility for the attack and branded it a revenge act for a Pakistani military offensive known as Operation Zarb-e-Azb which targeted the Taliban safe havens in northwest Pakistan in a region known as North Waziristan. This operation was launched six months prior to the Peshawar attack. TTP statements indicated that the attack was intended to target the children of members of the Pakistani army.