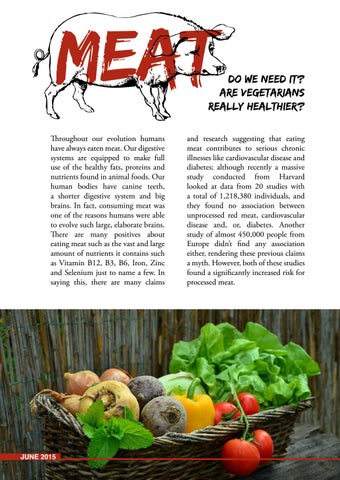 Do we need it? are vegetarians really healthier?

Throughout our evolution humans have always eaten meat. Our digestive systems are equipped to make full use of the healthy fats, proteins and nutrients found in animal foods. Our human bodies have canine teeth, a shorter digestive system and big brains. In fact, consuming meat was one of the reasons humans were able to evolve such large, elaborate brains. There are many positives about eating meat such as the vast and large amount of nutrients it contains such as Vitamin B12, B3, B6, Iron, Zinc and Selenium just to name a few. In saying this, there are many claims

and research suggesting that eating meat contributes to serious chronic illnesses like cardiovascular disease and diabetes; although recently a massive study conducted from Harvard looked at data from 20 studies with a total of 1,218,380 individuals, and they found no association between unprocessed red meat, cardiovascular disease and, or, diabetes. Another study of almost 450,000 people from Europe didn’t find any association either, rendering these previous claims a myth. However, both of these studies found a significantly increased risk for processed meat.

Munjed Al Muderis tells his inspiring story of going from Royalty to Refugee, and then becoming a world renowned surgeon. Read about Refugee...

Munjed Al Muderis tells his inspiring story of going from Royalty to Refugee, and then becoming a world renowned surgeon. Read about Refugee...