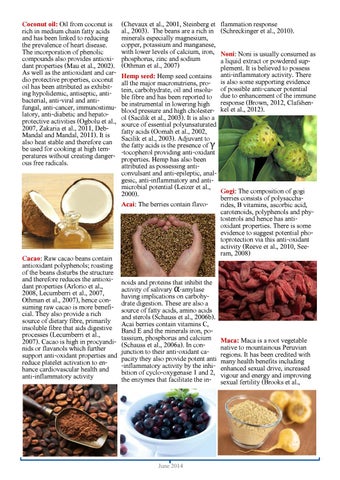 Coconut oil: Oil from coconut is rich in medium chain fatty acids and has been linked to reducing the prevalence of heart disease. The incorporation of phenolic compounds also provides antioxidant properties (Mau et al., 2002). As well as the antioxidant and cardio protective properties, coconut oil has been attributed as exhibiting hypolidemic, antiseptic, antibacterial, anti-viral and antifungal, anti-cancer, immunostimulatory, anti-diabetic and hepatoprotective activities (Ogbolu et al., 2007, Zakaria et al., 2011, DebMandal and Mandal, 2011). It is also heat stable and therefore can be used for cooking at high temperatures without creating dangerous free radicals.

noids and proteins that inhibit the activity of salivary Îą-amylase having implications on carbohydrate digestion. These are also a source of fatty acids, amino acids and sterols (Schauss et al., 2006b). Acai berries contain vitamins C, Band E and the minerals iron, potassium, phosphorus and calcium (Schauss et al., 2006a). In conjunction to their anti-oxidant capacity they also provide potent anti -inflammatory activity by the inhibition of cyclo-oxygenase 1 and 2, the enzymes that facilitate the in-

flammation response (Schreckinger et al., 2010). Noni: Noni is usually consumed as a liquid extract or powdered supplement. It is believed to possess anti-inflammatory activity. There is also some supporting evidence of possible anti-cancer potential due to enhancement of the immune response (Brown, 2012, Clafshenkel et al., 2012).

Gogi: The composition of gogi berries consists of polysaccharides, B vitamins, ascorbic acid, carotenoids, polyphenols and phytosterols and hence has antioxidant properties. There is some evidence to suggest potential photoprotection via this anti-oxidant activity (Reeve et al., 2010, Seeram, 2008)

Maca: Maca is a root vegetable native to mountainous Peruvian regions. It has been credited with many health benefits including enhanced sexual drive, increased vigour and energy and improving sexual fertility (Brooks et al.,

Spanish Actress Mariam Hernández shares her tips on what is means to be healthy. We look at the superfoods and if they are really 'super', t...

Spanish Actress Mariam Hernández shares her tips on what is means to be healthy. We look at the superfoods and if they are really 'super', t...