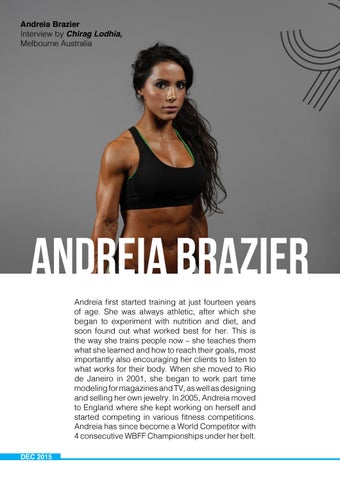 Andreia BrazieR Andreia first started training at just fourteen years of age. She was always athletic, after which she began to experiment with nutrition and diet, and soon found out what worked best for her. This is the way she trains people now â&#x20AC;&#x201C; she teaches them what she learned and how to reach their goals, most importantly also encouraging her clients to listen to what works for their body. When she moved to Rio de Janeiro in 2001, she began to work part time modeling for magazines and TV, as well as designing and selling her own jewelry. In 2005, Andreia moved to England where she kept working on herself and started competing in various fitness competitions. Andreia has since become a World Competitor with 4 consecutive WBFF Championships under her belt. DEC 2015