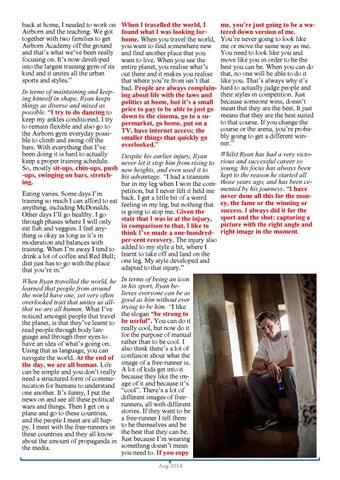 back at home, I needed to work on Airborn and the teaching. We got together with two families to get Airborn Academy off the ground and that’s what we’ve been really focusing on. It’s now developed into the largest training gym of its kind and it unites all the urban sports and styles.” In terms of maintaining and keeping himself in shape, Ryan keeps things as diverse and mixed as possible. “I try to do dancing to keep my ankles conditioned. I try to remain flexible and also go to the Airborn gym everyday possible to climb and swing off the bars. With everything that I’ve been doing it is hard to actually keep a proper training schedule. So, mostly sit-ups, chin-ups, push -ups, swinging on bars, stretching. Eating varies. Some days I’m training so much I can afford to eat anything, including McDonalds. Other days I’ll go healthy. I go through phases where I will only eat fish and veggies. I feel anything is okay as long as it’s in moderation and balances with training. When I’m away I tend to drink a lot of coffee and Red Bull; diet just has to go with the place that you’re in.” When Ryan travelled the world, he learned that people from around the world have one, yet very often overlooked trait that unites us allthat we are all human. What I’ve noticed amongst people that travel the planet, is that they’ve learnt to read people through body language and through their eyes to have an idea of what’s going on. Using that as language, you can navigate the world. At the end of the day, we are all human. Life can be simple and you don’t really need a structured form of communication for humans to understand one another. It’s funny, I put the news on and see all these political wars and things. Then I get on a plane and go to these countries, and the people I meet are all happy. I meet with the free-runners in these countries and they all know about the amount of propaganda in the media.

When I travelled the world, I found what I was looking forhome. When you travel the world, you want to find somewhere new and find another place that you want to live. When you see the entire planet, you realise what’s out there and it makes you realise that where you’re from isn’t that bad. People are always complaining about life with the laws and politics at home, but it’s a small price to pay to be able to just go down to the cinema, go to a supermarket, go home, put on a TV, have internet access; the smaller things that quickly go overlooked.” Despite his earlier injury, Ryan never let it stop him from rising to new heights, and even used it to his advantage. “I had a titanium bar in my leg when I won the competition, but I never felt it held me back. I get a little bit of a weird feeling in my leg, but nothing that is going to stop me. Given the state that I was in at the injury, in comparison to that, I like to think I’ve made a one-hundredper-cent recovery. The injury also added to my style a bit, where I learnt to take off and land on the one leg. My style developed and adapted to that injury.” In terms of being an icon in his sport, Ryan believes everyone can be as good as him without ever trying to be him. “I like the slogan “be strong to be useful”. You can do it really cool, but now do it for the purpose of manual rather than to be cool. I also think there’s a lot of confusion about what the image of a free-runner is. A lot of kids get into it because they like the image of it and because it’s “cool”. There’s a lot of different images of freerunners, all with different stories. If they want to be a free-runner I tell them to be themselves and be the best that they can be. Just because I’m wearing something doesn’t mean you need to. If you copy Aug 2014

me, you’re just going to be a watered down version of me. You’re never going to look like me or move the same way as me. You need to look like you and move like you in order to be the best you can be. When you can do that, no one will be able to do it like you. That’s always why it’s hard to actually judge people and their styles in competition. Just because someone wins, doesn’t mean that they are the best. It just means that they are the best suited to that course. If you change the course or the arena, you’re probably going to get a different winner.” Whilst Ryan has had a very victorious and successful career so young, his focus has always been kept to the reason he started all those years ago, and has been cemented by his journeys. “I have never done all this for the money, the fame or the winning or success. I always did it for the sport and the shot: capturing a picture with the right angle and right image in the moment.