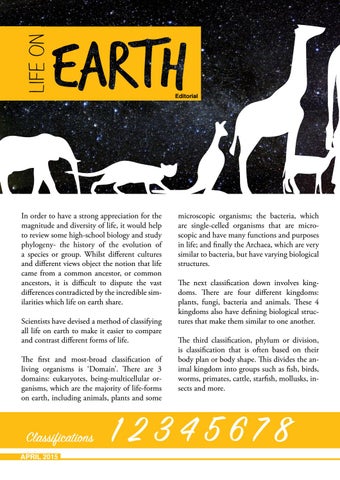 In order to have a strong appreciation for the magnitude and diversity of life, it would help to review some high-school biology and study phylogeny- the history of the evolution of a species or group. Whilst different cultures and different views object the notion that life came from a common ancestor, or common ancestors, it is difficult to dispute the vast differences contradicted by the incredible similarities which life on earth share. Scientists have devised a method of classifying all life on earth to make it easier to compare and contrast different forms of life. The first and most-broad classification of living organisms is â&#x20AC;&#x2DC;Domainâ&#x20AC;&#x2122;. There are 3 domains: eukaryotes, being-multicellular organisms, which are the majority of life-forms on earth, including animals, plants and some

microscopic organisms; the bacteria, which are single-celled organisms that are microscopic and have many functions and purposes in life; and finally the Archaea, which are very similar to bacteria, but have varying biological structures. The next classification down involves kingdoms. There are four different kingdoms: plants, fungi, bacteria and animals. These 4 kingdoms also have defining biological structures that make them similar to one another. The third classification, phylum or division, is classification that is often based on their body plan or body shape. This divides the animal kingdom into groups such as fish, birds, worms, primates, cattle, starfish, mollusks, insects and more.

In this edition dedicated to the Animal Kingdom, artist and activist Asher Jay shares her story of fighting for the World's Wildlife, we tak...

In this edition dedicated to the Animal Kingdom, artist and activist Asher Jay shares her story of fighting for the World's Wildlife, we tak...