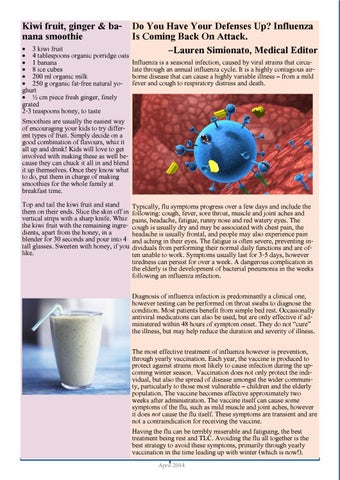 Kiwi fruit, ginger & ba- Do You Have Your Defenses Up? Influenza nana smoothie Is Coming Back On Attack.  3 kiwi fruit –Lauren Simionato, Medical Editor  4 tablespoons organic porridge oats Influenza is a seasonal infection, caused by viral strains that circu1 banana late through an annual influenza cycle. It is a highly contagious air8 ice cubes borne disease that can cause a highly variable illness – from a mild 200 ml organic milk 250 g organic fat-free natural yo- fever and cough to respiratory distress and death. ghurt  ½ cm piece fresh ginger, finely grated 2-3 teaspoons honey, to taste Smoothies are usually the easiest way of encouraging your kids to try different types of fruit. Simply decide on a good combination of flavours, whiz it all up and drink! Kids will love to get involved with making these as well because they can chuck it all in and blend it up themselves. Once they know what to do, put them in charge of making smoothies for the whole family at breakfast time. Top and tail the kiwi fruit and stand Typically, flu symptoms progress over a few days and include the them on their ends. Slice the skin off in following: cough, fever, sore throat, muscle and joint aches and vertical strips with a sharp knife. Whiz pains, headache, fatigue, runny nose and red watery eyes. The the kiwi fruit with the remaining ingre- cough is usually dry and may be associated with chest pain, the dients, apart from the honey, in a is usually frontal, and people may also experience pain blender for 30 seconds and pour into 4 headache and aching in their eyes. The fatigue is often severe, preventing intall glasses. Sweeten with honey, if you dividuals from performing their normal daily functions and are oflike. ten unable to work. Symptoms usually last for 3-5 days, however tiredness can persist for over a week. A dangerous complication in the elderly is the development of bacterial pneumonia in the weeks following an influenza infection.    

Diagnosis of influenza infection is predominantly a clinical one, however testing can be performed on throat swabs to diagnose the condition. Most patients benefit from simple bed rest. Occasionally antiviral medications can also be used, but are only effective if administered within 48 hours of symptom onset. They do not “cure” the illness, but may help reduce the duration and severity of illness. The most effective treatment of influenza however is prevention, through yearly vaccination. Each year, the vaccine is produced to protect against strains most likely to cause infection during the upcoming winter season. Vaccination does not only protect the individual, but also the spread of disease amongst the wider community, particularly to those most vulnerable – children and the elderly population. The vaccine becomes effective approximately two weeks after administration. The vaccine itself can cause some symptoms of the flu, such as mild muscle and joint aches, however it does not cause the flu itself. These symptoms are transient and are not a contraindication for receiving the vaccine. Having the flu can be terribly miserable and fatiguing, the best treatment being rest and TLC. Avoiding the flu all together is the best strategy to avoid these symptoms, primarily through yearly vaccination in the time leading up with winter (which is now!). April 2014