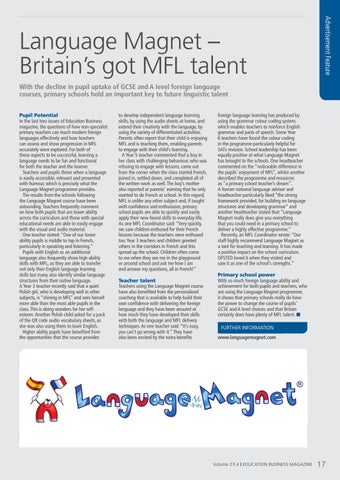 Language 800 WORDMagnet EDIT – HEADLINE Britain’s gotHERE MFL talent AS TIGHT AS POSS With the decline in pupil uptake of GCSE and A level foreign language courses, primary schools hold an important key to future linguistic talent to develop independent language learning skills, by using the audio sheets at home, and extend their creativity with the language, by using the variety of differentiated activities. Parents often report that their child is enjoying MFL and is teaching them, enabling parents to engage with their child’s learning. A Year 5 teacher commented that a boy in her class with challenging behaviour, who was refusing to engage with lessons, came out from the corner when the class started French, joined in, settled down, and completed all of the written work as well. The boy’s mother also reported at parents’ evening that he only wanted to do French at school. In this regard, MFL is unlike any other subject and, if taught with confidence and enthusiasm, primary school pupils are able to quickly and easily apply their new-found skills to everyday life. As one MFL Coordinator said: “Very quickly, we saw children enthused for their French lessons because the teachers were enthused too. Year 3 teachers and children greeted others in the corridors in French and this spread up the school. Children often come to me when they see me in the playground or around school and ask me how I am and answer my questions, all in French!” Teacher talent Teachers using the Language Magnet course have also benefited from the personalised coaching that is available to help build their own confidence with delivering the foreign language and they have been amazed at how much they have developed their skills with both the language and MFL delivery techniques. As one teacher said: “It’s easy, you can’t go wrong with it.” They have also been excited by the extra benefits

foreign language learning has produced by using the grammar colour coding system, which enables teachers to reinforce English grammar and parts of speech. Some Year 6 teachers have found the colour coding in the programme particularly helpful for SATs revision. School leadership has been equally positive at what Language Magnet has brought to the schools. One headteacher commented on the “noticeable difference in the pupils’ enjoyment of MFL”, whilst another described the programme and resources as “a primary school teacher’s dream”. A former national language adviser and headteacher particularly liked “the strong framework provided, for building on language structures and developing grammar” and another headteacher stated that “Language Magnet really does give you everything that you could need in a primary school to deliver a highly effective programme.” Recently, an MFL Coordinator wrote: “Our staff highly recommend Language Magnet as a tool for teaching and learning. It has made a positive impact on the school curriculum. OFSTED loved it when they visited and saw it as one of the school’s strengths.”

Pupil Potential In the last two issues of Education Business magazine, the questions of how non-specialist primary teachers can teach modern foreign languages effectively and how teachers can assess and show progression in MFL accurately were explored. For both of xoxoxoxo these aspects to be successful, learning a language needs to be fun and functional forFURTHER both the teacher and the learner. INFORMATION Teachers and pupils thrive when a language xxx is easily accessible, relevant and presented with humour, which is precisely what the Language Magnet programme provides. The results from the schools following the Language Magnet course have been astounding. Teachers frequently comment on how both pupils that are lower ability across the curriculum and those with special educational needs are able to easily engage with the visual and audio material. One teacher stated: “One of our lower ability pupils is middle to top in French, particularly in speaking and listening.” Pupils with English as an additional language also frequently show high ability skills with MFL, as they are able to transfer not only their English language learning skills but many also identify similar language structures from their native language. A Year 3 teacher recently said that a quiet Polish girl, who is developing well in other subjects, is “shining in MFL” and sees herself more able than the most able pupils in the class. This is doing wonders for her selfesteem. Another Polish child asked for a pack of the QR code audio vocabulary sheets, as she was also using them to learn English. Higher ability pupils have benefited from the opportunities that the course provides

Primary school power With so much foreign language ability and achievement for both pupils and teachers, who are using the Language Magnet programme, it shows that primary schools really do have the power to change the course of pupils’ GCSE and A level choices and that Britain certainly does have plenty of MFL talent. # FURTHER INFORMATION www.languagemagnet.com 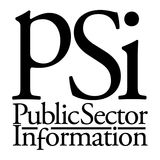