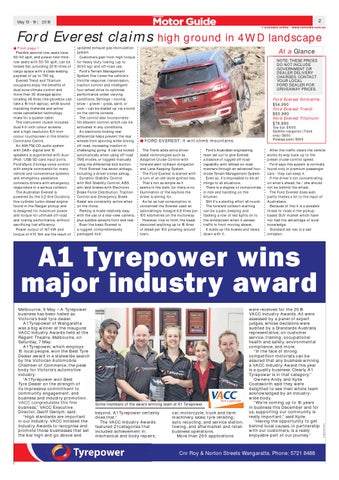 Flexible second-row seats have 60/40 split, and power-fold thirdrow seats with 50/50 split, can be folded flat, providing 2010 litres of cargo space with a class-leading payload of up to 750 kg. Everest Trend and Titanium occupants enjoy the benefits of dual zone climate control and more than 30 stowage spots totalling 48 litres (the glovebox can take a 16-inch laptop), while sound insulating materials and active noise cancellation technology make for a quieter cabin. The instrument cluster includes dual 4.0-inch colour screens and a high resolution 8.0-inch colour touchscreen in the Interior Command Centre. An AM/FM/CD audio system with DAB+ digital and 10 speakers is augmented with Aux/ iPod/ USB/SD card input ports. Ford’sSync 2 brings voice control with simple commands for many vehicle and convenience systems and emergency assistance connects drivers with emergency responders in a serious collision. The Australian Everest is powered by the 3.2-litre Duratorq five-cylinder turbo-diesel engine found in the Ranger pickup and is designed for maximum power and torque for ultimate off-road and towing performance, without sacrificing fuel efficiency. Power output of 147 kW and torque of 470 Nm are the result of

updated exhaust gas recirculation system. Customers gain from high torque for heavy-duty towing (up to 3000 kg) and off-road use. Ford’s Terrain Management System fine tunes the vehicle’s throttle response, transmission, traction control and intelligent four-wheel drive to optimise performance under varying conditions. Settings – normal, snow / gravel / grass, sand, or rock – can be dialled up via a knob on the centre console. The control also incorporates hill descent control, which can be activated in any conditions. An electronic locking rear differential helps prevent the rear wheels from spinning while driving off-road, increasing traction in challenging going. It can be locked automatically when using off-road TMS modes, or toggled manually using the differential lock button. Ford Everest has seven airbags, including a driver’s knee airbag. Dynamic Stability Control with Roll Stability Control, ABS anti-skid brakes with Electronic Brake Force Distribution, Traction Control and Emergency Brake Assist are constantly active when on the move. Parking is made relatively easy with the use of a rear-view camera, plus audible sensors front and rear. Even the basic Everest is a rugged, comprehensively packaged 4x4.

high ground in 4WD landscape At a Glance NOTE: THESE PRICES DO NOT INCLUDE GOVERNMENT OR DEALER DELIVERY CHARGES. CONTACT YOUR LOCAL FORD DEALER FOR DRIVEAWAY PRICES.

FORD EVEREST: It will climb mountains. The Trend adds extra driver assist technologies such as Adaptive Cruise Control with forward alert collision mitigation and Lane Keeping System. The Ford Everest is started with a turn of an old-style ignition key. That’s not as simple as it seems in the dark, for there is no illumination of the keyhole the driver is aiming for. As far as fuel consumption is concerned the Everest used an astonishingly meagre 6.8 litres per 100 kilometres on the motorway. However, true to form, the beast devoured anything up to 16 litres of diesel per 100 prowling around town.

Ford’s Australian engineering team set out to give Everest a balance of rugged off-road capability with refined on-road manners through an advanced fourmode Terrain Management System. Even so, it’s impossible to be all things to all situations. There is a degree of compromise in ride and handling on the bitumen. Still it’s a sterling effort all round. The forward collision warning can be a pain, beeping and flashing a row of red lights on to the windscreen when it senses traffic in front moving slower. It loads up the brakes and slows down with it.

After the traffic clears the vehicle works its way back up to the preset cruise-control speed. Ford says this system is normally found only in premium passenger cars - they can keep it. If the driver’s not concentrating on what’s ahead, he / she should not be behind the wheel. The Ford Everest does well, partly thanks a lot to the input of Australians. Because of this it is a sizeable threat to rivals in the pickupbased SUV market which have not had the advantage of local knowledge. Standard sat nav is a sad omission.

Melbourne, 9 May – A Tyrepower business has been hailed as Victoria’s best tyre dealer. A1 Tyrepower of Wangaratta was a big winner at the inaugural VACC Industry Awards held at the Regent Theatre, Melbourne, on Saturday, 7 May. A1 Tyrepower, which employs 10 local people, won the Best Tyre Dealer award in a statewide search by the Victorian Automobile Chamber of Commerce, the peak body for Victoria’s automotive industry. “A1 Tyrepower won Best Tyre Dealer on the strength of its impressive commitment to community engagement, and business and industry promotion. 9$&amp;&amp; FRQJUDWXODWHV WKLV ²QH business,” VACC Executive Director, Geoff Gwilym, said. “High standards are important in our industry. VACC initiated the Industry Awards to recognise and promote those businesses that set the bar high and go above and

Some members of the award winning team at A1 Tyrepower.

beyond. A1 Tyrepower certainly does that.” The VACC Industry Awards featured 21 categories that included achievement in: mechanical and body repairs;

were received for the 2016 VACC Industry Awards. All were assessed by a panel of expert judges, whose decisions were audited by a Standards Australia representative, on customer service, training, occupational health and safety, environmental compliance, and more. “In the face of strong competition motorists can be assured that any business winning a VACC Industry Award this year is a quality business. Clearly A1 Tyrepower is in that category.” Owners Andy and Kylie Coatsworth said they were delighted to see their whole team acknowledged by an industrywide body. “We’re coming up to 10 years in business this December and for us, supporting our community is really important,” said Kylie. “Having the opportunity to get behind local causes, in partnership with our customers, is a really enjoyable part of our journey.”