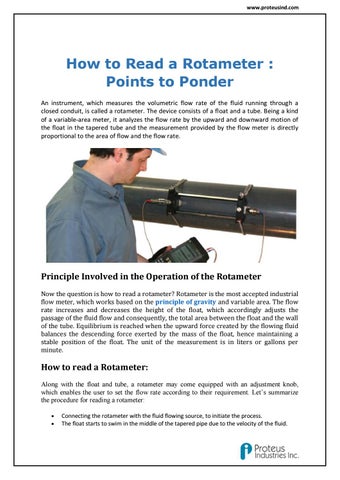 How to Read a Rotameter : Points to Ponder An instrument, which measures the volumetric flow rate of the fluid running through a closed conduit, is called a rotameter. The device consists of a float and a tube. Being a kind of a variable-area meter, it analyzes the flow rate by the upward and downward motion of the float in the tapered tube and the measurement provided by the flow meter is directly proportional to the area of flow and the flow rate.

Principle Involved in the Operation of the Rotameter Now the question is how to read a rotameter? Rotameter is the most accepted industrial flow meter, which works based on the principle of gravity and variable area. The flow rate increases and decreases the height of the float, which accordingly adjusts the passage of the fluid flow and consequently, the total area between the float and the wall of the tube. Equilibrium is reached when the upward force created by the flowing fluid balances the descending force exerted by the mass of the float, hence maintaining a stable position of the float. The unit of the measurement is in liters or gallons per minute.

How to read a Rotameter:

Along with the float and tube, a rotameter may come equipped with an adjustment knob, which enables the user to set the flow rate according to their requirement. Let’s summarize the procedure for reading a rotameter: • •

Connecting the rotameter with the fluid flowing source, to initiate the process. The float starts to swim in the middle of the tapered pipe due to the velocity of the fluid.

The side of the meter has a scale. The lower and upper level of the float is to be measured by that scale, which gives the flow rate.

So, this is all about how to read a rotameter, which works in the combined effects of the velocity of the fluid, the gravity of the float, and annular area of the meter. Information Presented by :Proteus Industries Inc. 340 Pioneer Way Mountain view, California, 94041 Call: (650) 943-4127 sales@proteusind.com

https://www.proteusind.com : Flow Measurement Using Rotameter : Proteus Industries Inc. is dedicated to developing Best Liquid Flow Meter Instrument and providing consistent customer satisfaction. Proteus has provided value added product customization for our customers for over 30 years. Some of the more common additions and/or modifications are cables with connectors, fittings, viscosity calibrations and mounting panels. Other customization has involved preparing our units to operate at extreme fluid temperatures of -50°C to 200°C. All units are tested, assembled, and warranted by Proteus for five years. We work with customer-provided drawings and designs or customer-approved drawings created in-house. Having Proteus provide fully assembled units allows our customers to eliminate multiple vendors and a long trail of accountability. Customized products account for about 70% of all Proteus sales. Very few flow product manufacturers provide this service to their customers. 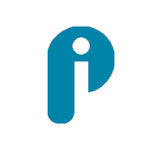