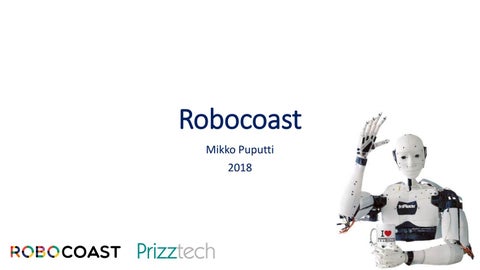 Robocoast in numbers • 100 Robotics, IoT and Artificial Intelligence (AI) companies • 2 universities found in Satakunta and both have specialized in Robotics and Artificial Intelligence • 1 000 robotics, IoT and AI specialists • The total turnover generated by the Robocoast companies is over 300 million euros (2016) • Growth of turnover 47 % (2010-2016)

The role of Robocoast is to connect and activate â&#x20AC;Ś Organizations that utilize robotic and automation solutions Public sector

Made in China 2025 • Made in China 2025 (MiC2025) is a national development program of China • Intelligent manufacturing is the main target of MiC2025 • City of Ningbo (7,9 million citizens) is selected as the first pilot city • SAFEA (State Administration of Foreign Experts Affairs) coordinates MiC2025 funding and projects together with Ningbo • China`s government allocates billions of EUR to actions of MiC2025 • For example In 2016, Ningbo invested abroad 1.97 billion USD to 526 companies and projects

Since 2016 Ningbo SAFEA and Robocoast network and Prizztech Ltd have together develop an international pilot program between the two countries. This program promotes opportunities for Finnish Expertise and small & medium size companies to enter Chinese market, and provides new path for Ningbo companies to develop their businesses to become more international. Ningbo SAFEA is a municipal authority administering relevant international exchanges and cooperation, building up the service system for overseas expertise introduction. Ningbo SAFEA is also leaded by center government SAFEA. SAFEA is a key organization in connecting foreign expertise with China’s national development projects. SAFEA plays an important role in Ningbo region development in relation with central government on “Made In China 2025 Project”. Ningbo is selected as the first pilot city of ” Made in China 2025 Project”, the main reasons are : 1. With diverse industrial systems, logistic location and potentiality, Ningbo is a important manufacturing base in China. 2. Ningbo is the economic center of South wing of Yangtze River Delta. 3. The superposition of several strategic opportunities, such as the Belt and Road Initiative, Yangtze River economic belt, Yangtze River cities cluster construction, make Ningbo development more vitality.

Intelligent manufacturing is the main target of ” Made in China 2025 Project” . Being a pilot city enables the possibility for Ningbo to create international pilot development projects, like the one with Ulvila-Satakunta-Finland (USF). UlvilaSatakunta-Finland and Robocoast Robotics and Automation cluster enables innovative model for cooperation between Ningbo city and Finland.

Ulvila-Satakunta-Finland is the name of the platform in Finland end. The official name has reported to the city council of Finland. To promote the cooperation between Ningbo and Finland, we are planning to invest setting up “Made in China 2025 Research and Development Center” in Ulvila.

Cooperation model between Robocoast and Ningbo • Ningbo Haishu Oy is a company that City of Ulvila has established for City of Ningbo. Ningbo purchased whole share capital of Ningbo Haishu Oy. After this, Ningbo is moving a lot of capital into the company's use. In 2018 investment by City of Ningbo for Ningbo Haishu Oy is 2 000 000 EUR • Ningbo Haishu Oy funding R&D and modernization projects and buys expertise from Robocoast Cluster. • SAFEA: “To promote the cooperation between Ningbo and Finland, we are planning to invest setting up Made in China 2025 Research and Development Center in Ulvila.” • And now MiC2025 cooperation has opened a door to Robocoast companies so they can offer their solutions and expertise to the public sector of China. 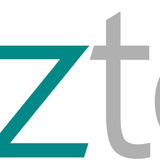 Robocoast ja Made in China 2025

Robocoast ja Made in China 2025