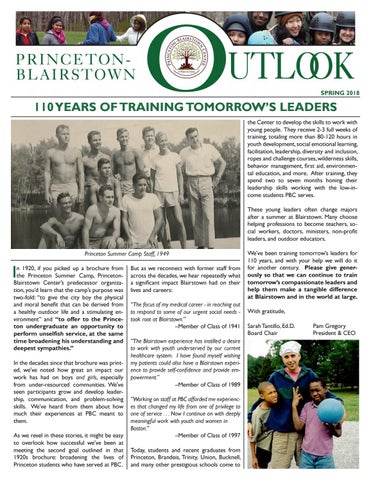 n 1920, if you picked up a brochure from the Princeton Summer Camp, PrincetonBlairstown Center’s predecessor organization, you’d learn that the camp’s purpose was two-fold: “to give the city boy the physical and moral benefit that can be derived from a healthy outdoor life and a stimulating environment” and “to offer to the Princeton undergraduate an opportunity to perform unselfish service, at the same time broadening his understanding and deepest sympathies.” In the decades since that brochure was printed, we’ve noted how great an impact our work has had on boys and girls, especially from under-resourced communities. We’ve seen participants grow and develop leadership, communication, and problem-solving skills. We’ve heard from them about how much their experiences at PBC meant to them. As we revel in these stories, it might be easy to overlook how successful we’ve been at meeting the second goal outlined in that 1920s brochure: broadening the lives of Princeton students who have served at PBC.

But as we reconnect with former staff from across the decades, we hear repeatedly what a significant impact Blairstown had on their lives and careers: “The focus of my medical career - in reaching out to respond to some of our urgent social needs took root at Blairstown.” –Member of Class of 1941 “The Blairstown experience has instilled a desire to work with youth underserved by our current healthcare system. I have found myself wishing my patients could also have a Blairstown experience to provide self-confidence and provide empowerment.” –Member of Class of 1989 “Working on staff at PBC afforded me experiences that changed my life from one of privilege to one of service . . . Now I continue on with deeply meaningful work with youth and women in Boston.” –Member of Class of 1997 Today, students and recent graduates from Princeton, Brandeis, Trinity, Union, Bucknell, and many other prestigious schools come to

We’ve been training tomorrow’s leaders for 110 years, and with your help we will do it for another century. Please give generously so that we can continue to train tomorrow’s compassionate leaders and help them make a tangible difference at Blairstown and in the world at large. With gratitude, Sarah Tantillo, Ed.D. Board Chair

In Memoriam all professionalization of the program that led to the Princeton Education Center at Blairstown. Former Board Co-Chair Chris Shepherd ’98 describes Dave as “one of the greats” while Honorary Trustee Ev Pinneo ’48 remembers Dave as someone who was “deeply interested in Blairstown and who had a strong urge for Princeton University to take over the site and operate it.” He left a tremendous mark on our 110-year history.

e are saddened to share the news that Honorary Trustee Dave Rahr ’60 passed away on March 9, 2018. He served on the PBC Board of Trustees from 1974-1985 and was an Honorary Trustee from 19852018. As an undergraduate, he was active in a variety of extra-curricular activities including serving as Director of the Princeton Summer Camp in 1958. After graduation, Dave worked for the University for the next 22 years where he served successively as an Admission Officer, the Assistant Secretary of the University and as Secretary, then Director of the Alumni Council overseeing Princeton’s alumni relations efforts. From 1966-1970, while working for the University, he served as the Faculty Director of the Princeton Summer Camp. He was a major advocate for having the Blairstown property transferred to and operated by the University. He felt it should be used “as a multi-purpose educational and recreational resource available for use by all members of the University community and off-campus groups and programs.” He felt the camp could “no longer be adequately directed by a single, volunteer non-professional faculty director or advisor.” Dave set in motion the tremendous changes that came in the 1970s including the hiring of John Danielson as the organization’s first executive director, the raising of funds to winterize the site, and the over-

t is with great sadness that we share news of the passing of Warren “Philo” Elmer ’69. Philo served on the Board of Trustees of the Center in the 1990s and also served as the Executive Director from 2004-2005. Trustee Susan Danielson remembers him strolling around the PBC Campus chatting and checking in with staff and participants. “He had such a peaceful, engaging way about him. It was easy to forget sometimes how much wisdom and expertise he embodied, because he was so humble and so interested in the lives of others. And yet, because of his way, his values, his expertise, and wisdom, he was such a resource to all of us.” Philo was a giant in the experiential education field where for over 40 years he was engaged as a teacher, environmental educator, adventure programmer, entrepreneur, program director, executive director, and board member. He co-founded the Association for Challenge Course Technology (ACCT), brought diverse programs together to form the Association for Experiential Education’s (AEE) mid-Atlantic Region, and sat on AEE’s Board. He was involved in both Outdoor Action and the Princeton-Blairstown Center in virtually every capacity imaginable. He received Outdoor Action’s Josh Miner ’43 Experiential Education Award in 2004. Beyond PBC and the University, he led adventure programming in more than forty states and overseas, working with well over 200,000 participants from a wide variety of organizations. Philo’s legacy lives on in the work that PBC does each day at Blairstown. Our staff directly benefit from his efforts as they pursue ACCT certification and attend AEE conferences annually.

* Net unrealized gain/loss of Endowment Investment value is not included.

ary “Randy” Hobler was a Trustee of the Princeton-Blairstown Center during the 1990s and served several terms because of her passion for serving young people from under-resourced communities. While raising her children with her husband, Herb, a Princeton alumnus and local businessman, Randy was an active community volunteer. When the opportunity arose to serve on the PBC Board, Randy jumped at the chance. As an undergraduate, Herb had worked at the Princeton Summer Camp, PBC’s predecessor organization, as a counselor in Blairstown. Randy remembered Herb’s stories about his summer working with inner-city kids as they experienced the beauty of nature, some of them for the first time, and wanted to be part of making this opportunity available for a new generation of kids. Randy knew that she could have an impact on young people for years to come with a provision in her will to benefit PBC. With this gift, Randy’s legacy of work with PBC will live on forever, ensuring that students from under-resourced communities have the opportunity for a Blairstown experience. In honor of the 110th anniversary of the Princeton-Blairstown Center, we are launching the 1908 Legacy Society to recognize those who have chosen to remember PBC with a bequest or other legacy gift. To leave your legacy, please contact Meredith Murray at mmurray@princetonblairstown.org or 609-216-7025.

Princeton-Blairstown Center Elects Two New Trustees Russell DaSilva is Senior Counsel in the New York office of Pillsbury Winthrop Shaw Pittman LLC, a full service global law firm, where he advises on general corporate lending, trade finance, and leveraged acquisition finance, with a particular focus on cross-border transactions. Prior to joining Pillsbury in 2018, he spent 15 years as a partner in the finance practice at Hogan Lovells LLP, and prior to that practiced in the banking departments of Salans LLP and Milbank Tweed Hadley & McCoy. Russell is a member of the International Bar Association, where he recently Chaired the Banking Law Committee; the American Bar Association; and the Council on Foreign Relations. He holds an A.B. in English from Princeton University. He also holds a J.D. from Harvard Law School. While at Harvard, he served as the Editor of the International Law Journal. His philanthropic work includes serving as a board member of FARM Africa (USA) and The International Bar Association Foundation. He also is an emeritus trustee of Princeton-in-Asia, where until recently he served as a Vice President and Chair of the Executive Committee. Shawn Maxam became the assistant director for diversity and inclusion at Princeton University in 2016. In this role, he manages and supports planning and strategic initiatives focused on institutional diversity and equity goals, particularly those involving collaboration across University departments. Shawn previously served as the Prevention Coordinator for Men’s Initiatives in Princeton’s University Health Services from 2014 to 2016. He earned his BFA from Long Island University and two Master’s degrees from Bryn Mawr College in Social Service and Law & Social Policy.

Princeton Reunions 2018 The Princeton-Blairstown Center is proud to host a Reunions panel discussion: What to Believe and How to Talk About it in the Online Age Friday, June 1 3 – 5 p.m. Carl Fields Center and to host our annual