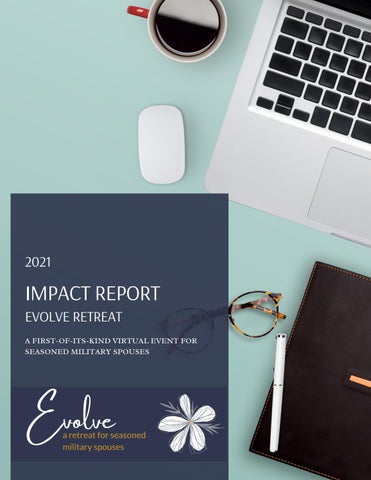 In 2018, Pride &amp; Grit was founded as an online community for military spouses to champion an honest conversation about military life&#39;s cumulative impact on spouses and families. In 2020, the Pride &amp; Grit community began to give a voice to the unique challenges of the seasoned military spouse. In late 2020, the idea for an interactive and inspiring retreat for seasoned spouses was born. Built around three pillars of personal identity, marriage, and family we set out to wrap our arms around this battle-tested and often under-supported subset of our military community, seasoned spouses. Through the support of a striking force of Life Coaching Partners, we prioritized connection to others and connection to self. We designed a retreat that provided opportunities for virtual roundtable coach-led discussions about these pillar topics. We provided access to Gallup&#39;s CliftonStrengths assessment to help attendees articulate their unique gifts to the world. We wanted to help attendees &quot;evolve together&quot; - in their personal life, in their marriage, in their military family, and for many, in their transition to civilian life. Did it work? Let&#39;s see...

Evolve 2021 was a global event with 91 attendees from 7 countries across 24 states in the US.

We are very proud of these location metrics. In addition to our first event going global, Evolve was so impactful and valuable the majority of attendees, would attend again.

Evolve was an opportunity to build connections, in small groups, with other seasoned spouses. It was a safe space to talk about military life and its cumulative impact. For attendees, it was an opportunity to gain support through a shared struggle, consider their current path, and define the course corrections they may want to make.

Felt Day One of Evolve was transformative, inspiring, supportive, or interesting

Felt Day Two of Evolve was transformative, inspiring, or supportive, or interesting

Felt a community for seasoned spouses is very important and helpful

The conference gave me the framework to work on myself, my values, and finding my voice to speak up for what I want/need.

Having the words and tools to better understand who I am I think are really going to change my life and the struggles I&#39;ve been in.

03 - THE SPEAKER STORY Through the speaker presentations, attendees began to view transition through a new lens. For some, the marriage talk helped them consider the impact of transition on their marriage. Others used the personal identity talk to consider their connection to their identity and where they want to be in the future.

Overall, both our topics and our speakers delivered the value we&#39;d intended. And helped us identity what is ahead for us.

Introduced me to thoughts I had not yet had about navigating transition out of the military with my husband. Incredibly helpful! Undoubtedly will enhance our experience in a significantly positive way.

I especially valued the openness and vulnerability of everyone in the small table groups.

I loved connecting to the other seasoned spouses... and sharing our current stories and our future fears. It was refreshing to not be the oldest person in the room.

05 - THE REMO STORY One of the significant financial investments for the Evolve retreat was in our virtual event platform, Remo. During a time when so many have fatigue over virtual meetings and webinars, we knew the platform was a crucial element in our strategy and our success. In the end, our investment paid off.

I normally don&#39;t really enjoy virtual formats for longer period of time, but the flow of the event and platform used was great and made time fly by.

Remo was the perfect format as it was very conducive to making connections with other seasoned spouses without overlapping conversations and awkward silence!

06 - THE AFFILIATION STORY We captured some basic demographic data. As expected, most of our attendees are nearing the end of their time as an active duty military family.

Been a military spouse for 16+ years

Married to Service Member with 20+ years of service

Expect to transition in the next 5 years

07 - THE MEDIA STORY Through the Evolve retreat marketing efforts and our refined messaging, it became clear that there was both interest and demand for a seasoned military spouse community and the conversations we&#39;re fostering there. Pride &amp; Grit&#39;s social media, of which the Evolve retreat was a portion, experienced these metrics before, during, and immediately following the event.

Media Placement The first-ever retreat dedicated to the needs of seasoned military spouses caught the attention of many. In particular, these feature articles directly impacted the visibility of the event. Military.com: A New Retreat Offers Seasoned Spouses a Chance to Focus on Themselves Before Transition MOAA.org: MOAA Interview: Creating Pride &amp; Grit, a Community of ‘Seasoned Spouses’ MilitaryFamilies.com (post-event): Retreat offers lessons, support for seasoned spouses

08 - THE SPONSOR STORY Without the support of our event sponsors, we could not have achieved the impact outlined in this report. The revenue generated from our sponsors funded 49% of our event budget.

WE THANK YOU FOR YOUR SUPPORT OF OUR PROGRAM Acknowledgements The Evolve Retreat was spearheaded by Jennifer Pasquale but was aided by Lyndsey Akers of Akers&amp;Co, a military spouse owned PR and Social Media Marketing agency Tera Blackham, a Freelance Graphic Designer and Editor April Hastings, a volunteer Event Experience Coordinator

This report summarizes the impact of the 2021 Evolve Retreat for Seasoned Military Spouses, hosted by Pride & Grit.