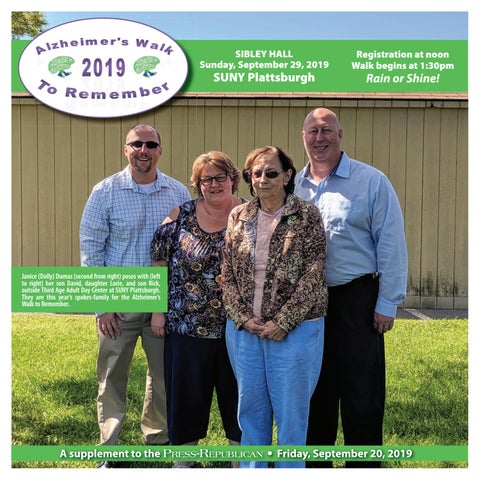 Janice (Dolly) Dumas (second from right) poses with (left to right) her son David, daughter Lorie, and son Rick, outside Third Age Adult Day Center at SUNY Plattsburgh. They are this year’s spokes-family for the Alzheimer’s Walk to Remember.

A supplement to the PRESS-REPUBLICAN • Friday, September 20, 2019

Keeping Up With Dolly With the help of family, friends, and Third Age Adult Day Center, Dolly Dumas is staying busy and keeping her spirits high after her Alzheimer’s diagnosis. By Allie Racette Lorie, Rick, and David Dumas started noticing signs of Alzheimer’s disease in their mother, Janice “Dolly” Dumas, around seven or eight years ago, before their father passed. At the time, their father was undergoing cancer treatment, which kept the family busy.

Dolly Dumas with her late husband, Larry Dumas, and their children and grandchildren. Photos provided

“When it first started, Dad was sick,” Lorie said, “And we were really go, go, go, and at first we were like, ‘Is this really something’?” “It was, ‘Is this a joke?’,” Rick added. “‘Did she really forget what she did ten minutes ago?’ And then it became a trend, and then it became real life.” According to the Alzheimer’s Association, memory loss, such as repeating the same questions again and again, is an early sign of Alzheimer’s, and one of the first signs the Dumas children noticed in their mother. “She would ask the same questions every few minutes,” Rick said. “Anxiety about not knowing answers. Wanting to do something. She just hated to sit at home. Dad used to call me, because he was going through cancer treatments, and he’d say, ‘Please come get your mother. Take her for a ride. Make her happy, please’.” Keeping busy seemed to help reduce Dolly’s anxiety, so she started spending a few days a week, part-time, at Third Age Adult Day Center, a specialized program for persons with dementia and/or memory loss of the Alzheimer’s type, on the SUNY Plattsburgh campus. “She was very antsy, and Dad had a hard time dealing with that, because she always wanted to be on the go.”

Free Support Services for Caregivers of People with Alzheimer's Disease and Other Forms of Dementia Available in - Clinton , Essex, Franklin, Hamilton, Warren and Washington Counties

Keeping Busy In a few weeks, it will be four years since the passing of Dolly’s husband. In that time, Dolly has started attending Third Age regularly, five days a week. Rick says he believes his mother has done a “complete 180,” thanks to her days spent at Third Age. “She’s just being herself, keeping active. I think her memory’s gotten a lot better, and her anxiety’s gotten a lot better.” Despite her improvement, there are still times when Dolly struggles with anxiety over her memory loss.

Lorie says Dolly is most anxious on the weekends, or when she leaves Third Age in the afternoons. “She’ll ask, ‘What are we doing tonight? What are we having for dinner?’ over and over. And she always needs to know what’s on TV.” Dolly’s anxiety is worst when she has to do something outside of her routine, as she struggles with her short-term memory, but the family has developed strategies to help her cope. “Situations like that, we’ll say, ‘Get a notepad’,” Lorie said. “And she’ll write down what she’s doing, who she’s going with, so she can refer to it.” Another way of easing Dolly’s anxiety is with one of her favorite pastimes: doing word searches. Rick says his mother is rarely found without one.

down the hall. They’re graduate students doing their clinical experience. They learn how to communicate with this population, which is important for their future, especially if they’re going into a field like Speech Pathology.” Lunch is provided through Meals on Wheels, followed by a group activity at 1:00pm and a snack at 2:00pm, after which they start closing up for the day. Sometimes, Dolly is brought home, and sometimes Lorie or one of her other children picks her up. As soon as she leaves, David said, she’s anxious to go back. “Sometimes I pick her up, and we’re driving, and she goes, ‘When do I go back to the day center?’”

“Those word searches, honestly. Those have become Christmas and birthday presents for her. Mother’s Day. Halloween. Whatever.”

As the spokes-family for this year’s Alzheimer’s Walk to Remember, the Dumases want to shine a light on Third Age and everything the program offers.

When Third Age took a shopping trip to the Dollar Tree, Dolly returned with several books of word searches and a new pack of pens.

Third Age was established 30 years ago thanks to a small grant from Brookdale secured by Dr. Zandi, a former SUNY Plattsburgh professor. Christine has worked at Third Age for 19 years, and thinks the program is, unfortunately, “a well-kept secret.”

A DAy AT THiRD Age Most of Dolly’s daily routine revolves around her attendance at Third Age. Thanks to the day program, Dolly has been able to remain in her home, and still lives on her own. In the mornings, her children take turns getting her ready for the day, though Lorie is her primary caretaker. “We’re lucky, with Third Age,” Lorie said. “They pick her up around 7:30 in the morning. She has breakfast at home, but there’s always coffee waiting.” According to Christine Ouelette, the Program Manager at Third Age, every day starts with a coffee social. “It’s very structured,” Christine said. “And that’s the important thing with folks that are memory impaired.” After coffee, there’s a physical activity of some kind, focusing on maintaining range of motion, which is important in the senior population. Around 10:30am, they do a cognitive activity. “Dolly’s very good at those activities,” Christine said. “They keep the brain working.” Later, there’s time for creative arts, which can take a variety of forms. Sometimes, they even have musicians or other live entertainment. But Third Age benefits the students as well as its participants, Christine said. “Dolly is part of a conversation group with our Speech and Hearing students

“I don’t know how many people know that Third Age even exists, and what they do,” Rick said. “That’s a goal for me, out of all of this.” “I can’t explain enough how this place has changed her,” David said. “If you rewind back to when Dad passed, I could have never fathomed we’d be where we are now. The staff knows where we were and where we are today, and we’re very, very thankful. Part of what we want to do is let people know this service exists.” Rick stressed how Third Age benefits caregivers, as well, offering them a much-needed break. “If you’re the

“I’m surprised she doesn’t have one in her hands right now,” David said.

primary caregiver, and you can take 16 hours a week for some time for yourself, it’s amazing.”

LiKe FAMiLy Third Age has become a family, for Dolly. She enjoys playing cards and participating in the daily physical activity, and chatting with some of her favorite staff members. Dolly has a special bond with Ali Sheldrick and Jessica Fenton, though she gets along with the entire staff. “Christine has been awesome from day one,” Rick said. “And the workers love Mom and have really embraced her. They’re all good.”

the best thing you can do is be patient and explore your options, and know that there are places like this. There are opportunities out there where, if you need help, you can reach out.” This year’s Alzheimer’s Walk to Remember is set for Sunday, September 29th, at Sibley Hall at SUNY Plattsburgh. Registration will begin at noon, and the walk will begin at 1:30pm. Funds raised by the event will benefit the Center for Neurobehavioral Health and Third Age Adult Day Center. To learn more about Third Age, located at 101 Broad St. in Plattsburgh, call (518) 564-2329 or visit them online at https://www.plattsburgh.edu/about/ centers/cnbh/third-age/index.html.

“It’s collaborative,” Christine said, citing the support of Dr. Richard Durant, the new Clinical Director, and Dr. Michael Morales, Project Director. “There were a lot of people involved through the years to make this work, and there still are.”

THeRe’s HeLp According to the Alzheimer’s Association, 50 million people worldwide are currently living with Alzheimer’s Disease and other forms of dementia. David wants to stress that support exists for patients and caregivers. “If there’s anybody dealing with a situation with a loved one with Alzheimer’s,

Need Help? Call the Center for Neurobehavioral Health at (518) 564-3377 for information about resources, support groups and appointments. 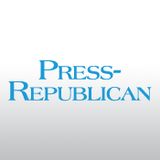 This year’s Alzheimer’s Walk to Remember is set for Sunday, September 29th, at Sibley Hall at SUNY Plattsburgh.

This year’s Alzheimer’s Walk to Remember is set for Sunday, September 29th, at Sibley Hall at SUNY Plattsburgh.