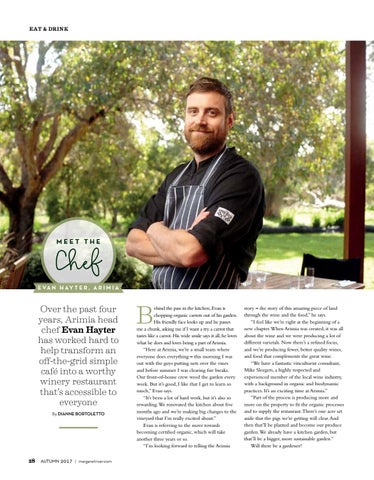 Over the past four years, Arimia head chef Evan Hayter has worked hard to help transform an off-the-grid simple café into a worthy winery restaurant that’s accessible to everyone By DIANNE BORTOLETTO

ehind the pass in the kitchen, Evan is chopping organic carrots out of his garden. His friendly face looks up and he passes me a chunk, asking me if I want a try a carrot that tastes like a carrot. His wide smile says it all, he loves what he does and loves being a part of Arimia. “Here at Arimia, we’re a small team where everyone does everything – this morning I was out with the guys putting nets over the vines and before summer I was clearing fire breaks. Our front-of-house crew weed the garden every week. But it’s good, I like that I get to learn so much,” Evan says. “It’s been a lot of hard work, but it’s also so rewarding. We renovated the kitchen about five months ago and we’re making big changes to the vineyard that I’m really excited about.” Evan is referring to the move towards becoming certified organic, which will take another three years or so. “I’m looking forward to telling the Arimia

story – the story of this amazing piece of land through the wine and the food,” he says. “I feel like we’re right at the beginning of a new chapter. When Arimia was created, it was all about the wine and we were producing a lot of different varietals. Now there’s a refined focus, and we’re producing fewer, better quality wines, and food that complements the great wine. “We have a fantastic viticulturist consultant, Mike Sleegers, a highly respected and experienced member of the local wine industry, with a background in organic and biodynamic practices. It’s an exciting time at Arimia.” “Part of the process is producing more and more on the property to fit the organic processes and to supply the restaurant. There’s one acre set aside that the pigs we’re getting will clear. And then that’ll be planted and become our produce garden. We already have a kitchen garden, but that’ll be a bigger, more sustainable garden.” Will there be a gardener?