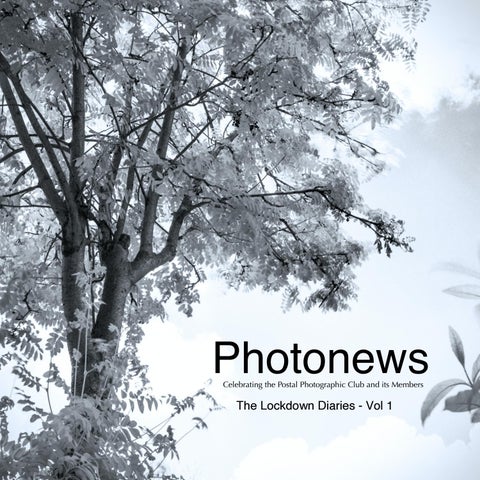 Photonews Celebrating the Postal Photographic Club and its Members

Lockdown Diaries - Volume 1 Welcome to an extra edition of Photonews. Unprecedented times call for unprecedented actions and several people have responded to my call for images that youâ&amp;#x20AC;&amp;#x2122;ve been shooting in Lockdown. Jeff Waters, David James and Richard Walliker are the stars of this first Lockdown Diary. As I say, this is the first, and I have submissions on hand for a second issue will you be the next person who gets in touch and graces Volume 3? I am happy to produce as many extra editions as there are submissions.

Page 4: David James is no stranger to Photonews, and indeed he has submitted two sets of Lockdown images the first of which are his Lockdown Diary which we present here. He also produced the yipee Lockdownnnnnn image â&amp;#x20AC;Ś Page 14: Another familiar name, Richard Walliker has been exploring the more creative side of his art and shares the fruits of his labours for us here.

Day 0: decided that if I was going to do this for as long as possible then I needed a title. The fridge magnet has been stuck on the front of one of the filing cabinet draws for as long as i can remember. Just added a few words. DAJ

ON THE COVER: A touch of blue. Fun in the sun with some Rollei Infrared 400 film shot at ISO 6 necessitating a tripod; a Bronica SQ-A medium format camera and a 720nm filter. Blue tone added in PS. Shot and developed 21/5/2020. Rodinal (1+25) for the curious.

Days 1 - 3: Went to Sainsburys to do some shopping the day after Mothering Sunday and thought that if I get some flowers I can practise some still life photography, which wasn&#39;t as easy as I thought it might be! Anyhow they were giving bunches of flowers away, left overs from the previous day, so I came home with two and these were some of my initial efforts.

Day6: Decided that if I was doing this then I would need a variety. As I was stood on the landing, looking down the stairs I was taken by the way each tread in the staircase was slightly diďŹ&amp;#x20AC;erent. As it is a brown carpet I changed it to black and white to show the tonal changes more.

Day13: I don&#39;t normally photograph food but was making a bacon butty one day on the grill when the idea ocurred......before and after.

A reminder of what is being missed.

And the Music Played On

Had a plan that I would sit and listen to my vinyl collection (whilst doing nothing else). Still hasn&#39;t happened but i&#39;m working on it. However, I did take a couple of shots then decided it needed something else so found some music on the internet and &quot;borrowed&quot; some notes. One of the few creative images, thus far, from the Lockdown.

Day22: Sunlight and Shadow Mood! Sunshine and shadow. The velux window over the top of the stairs has an advert stuck on it and there is no way I can reach it. Midday sunshine gave me the image and the idea.

Day 24: Rock Swirls Cleaning up and changing the table top away from pebbles and water (to stop me dehydrating whilst the winter central heating was running). This is another creative image with the swirl being added. 9

Day 29: Had an idea to do an egg shot then our webmaster posted this on Facebook. Wasn&#39;t what I had in mind but when I got the box of eggs out of the fridge the egg in the exact same position was broken. Deja vu.....had to be. Apologies to Graham Dean, again!

I leave a glove out for when I bring the milk in. A sign of being careful what we touch.

Much as I would like to be up in the Dales, I consider it a risk too far, and not necessarily for me. Work on the assumption that everyone is infected, including me. Accidents can, and will, happen.

Communication, what we all need in these times. Especially if you live on your own. 12

Day 34: Exactly eight months to Christmas Day. These crackers will reside on my tree as and when the time comes.

Imagination is a wonderful thing. We can only look forward in hope to those days again.

Thanks as always David! We do have a bonus set of images from David which I will share in the next issue.

Variation on a theme

To finish - originally a photograph of a wall light, from underneath. Then a bit of

More from Jeff in Lockdown Diaries 2

Richard Walliker Richard has been having fun exploring the Vortex - I shall let the images speak for themselves.

Thanks again Richard! A fascinating set of images - you are always welcome on the pages of Photonews. 20

To view more of our images, learn about the club and for membership information, please visit postalphotoclub.org.uk

Photonews Celebrating the Postal Photographic Club and its Members

An extra edition featuring members' images made in Lockdown 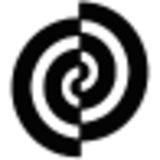