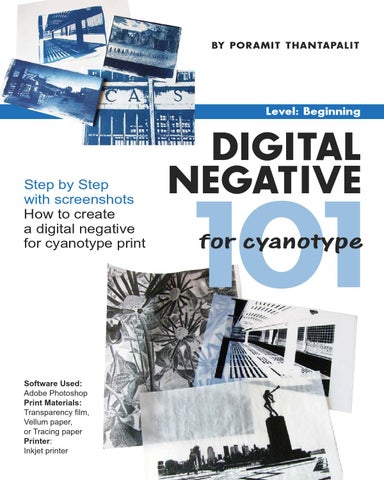 1. Open your color digital image. (file size should be no less than 1200x1200 px or 1 MB.) Then rename and saving your photo as TIFF in your new folder. file&gt;save as&gt;TIFF

2. Duplicate the image in a separate layer and convert to black and white. image&gt;adjustments&gt;desatulate 2 DIGITAL NEGATIVE FOR CYANOTYPE

3B. Adjust the new layer curve to fix your image highlight and shadow tone. DIGITAL NEGATIVE FOR CYANOTYPE 3

3C. This is the curve setting for this image. (skip 3A-C if your photo is already editing)

5B. Image is inverted to negative format. 6 DIGITAL NEGATIVE FOR CYANOTYPE

6. Flatten your image. click on the arrow on the right corner of layer pallette to view the pop up and select flatten image

7. The image size setting is up to you. For this image, I will make it to fit 8.5x11 in. using Pictorico transparent film. (your resolution should be 300 dpi)

8A. Unsharp masking your image. This is extra step in case you need to increase image sharpness. filter&gt;sharp&gt;unsharp masking 8 DIGITAL NEGATIVE FOR CYANOTYPE

8B. This is my unsharp masking setting for most of my digital photos. You can adjust the setting as you desire. Saving your photo as TIFF, when you are finished working with the image. file&gt;save as&gt;TIFF Note:

All screenshots are captured from Adobe phototoshop CS 2 on PC. The menu and function key may look differerent from latest version or Mac platform.

I recommend using Pictorico transparency film for best quality of your negative, but vellum and tracing paper are accepable for budget users.

9. Your finished image should look like this. Ready for print on transparent film.

A native of Thailand, Poramit Thantapalit graduated with a bachelor始s degree in journalism. He worked as a video producer and in television for three years before he decided to continue studies in US. He received his master始s degree in computer graphics from New York Institute of Technology. He worked as a graphic designer for a popular health and fitness magazine in NYC for over 10 years. He now works as an artist in various mediums such as painting, drawing, printmaking, mixed media, photography and multimedia arts.

DIGITAL NEGATIVE FOR CYANOTYPE is an online instruction book on how to create digital negatives for cyanotype print. Written from his 10 years photo editing experience as graphic designer and he has studied in cyanotype print for two years. Poramit Thantapalit, NYC artist. Design by Poramit Thantapalit 漏 2013 All rights reserved Poramit始s publications: http://issuu.com/poramit

Step by step with screenshots. How to create a digital negative for cyanotype print (by Poramit Thantapalit) 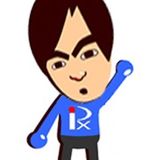