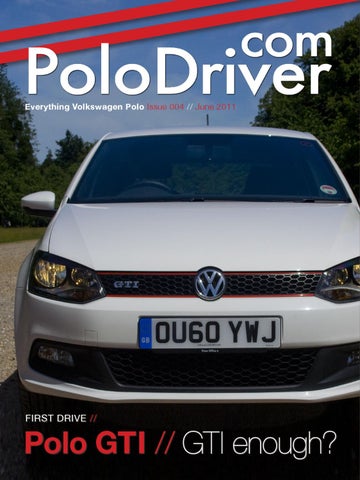 At last! We get our hands on the new Polo GTI. A hot small Golf or a warmed-over supermini? WORDS // RICH GOODING PICTURES // RICH GOODING AND VOLKSWAGEN UK PRESS OFFICE JUNE 2011 | POLODRIVER.COM | PAGE 02

ot Golfs have always overshadowed hot Polos. Ever since the runaway success of the original 1976 Golf GTI, performance versions of the larger VW hatchback have excelled, while the more spirited versions of the Polo have merely been good, but seemingly not quite as polished as the hot Golf. However, Volkswagen must have confidence in its new hot Polo. While much has been made of the fact that the regular fifth-generation Polo draws on many Golf VI styling cues, VW have chosen to ignore the criticisms and has made the 2011 Polo GTI look almost identical to its larger go-faster brother. We can’t see anything wrong with that however, the well‑judged honeycomb red-trimmed grille, plastic sill covers, larger rear spoiler and twin exhausts all adding to the chunky, nicely proportioned and sharply‑creased Polo V body.

Sharing its engine with other hot tots in the VW Group (the SEAT Ibiza Cupra and Skoda Fabia vRS) doesn’t harm the Polo GTI either. The 1.4-litre, 178bhp supercharged and turbocharged four-cylinder engine promises positively spritely performance, coupled with excellent fuel economy. The 178bhp this engine provides is produced at 6200rpm, while 184lb ft of torque is available from 2000 to 4500rpm. The 1390cc unit gets the 1269kg Polo GTI to 62mph from rest in just 6.9 seconds, returning 47.9mpg on the combined cycle, and posting CO2 figures of just 139g/km. Lots of performance and lots of economy. Is there a catch? That catch just might be the standard DSG-only gearbox. Keen drivers may wish for a six‑speed manual as fitted to other Polos, but again, Volkswagen Group has confidence in the powertrain combination, as both the Polo GTI’s in-house rivals are only available with the semi-automatic, twin-clutch gearbox, too. So, the Polo GTI takes the old big power, small car recipe and adds a technological twist. But how does it taste? ‘Nuggety’ is one word we’d use to describe it. On our brief drive around the lanes just outside of Cliveden, Berkshire, the latest sports Polo felt very tied down and focused.

First impressions suggest that it’s every inch a Volkswagen GTI, if not up there with the Renaultsport Clio 200 for those wanting a side order of rawness to their junior hot hatchback. While the Polo GTI is both lively and fun, it’s also a great all‑round package. Whether it was the intention – and we suspect it was – going on our last encounter with a Mk VI Golf GTI, it feels like a more compact and entertaining version of its larger trainer‑wearing brother. The engine sounds great, with a nice growl on accelerative bursts, while interior quality is every bit as good as the Golf. What must be one of the best three-spoke steering wheels Volkswagen currently makes features up and downshift paddles for the DSG gearbox, while chequered ‘Jacara’ seats give a nod to that 35‑year VW GTI heritage. Sitting inside the Polo GTI’s cockpit, you feel very snug and ‘cosy’, feeling very much part of the car. A good driving position and range of adjustability is a traditional Polo strength. As is a good ride. The GTI is no different here. While firmer and lower suspension than its lesser brethren makes for a more sports-orientated package, VW has judged the levels of comfort vs sporting ride well. While a more noticeable firmness is there, it’s also quite cosseting.

While the ride comfort strikes a nice balance, the focus of the performance on offer has just been to make the car go very fast. Believing VW’s 0-62mph time of 6.9 seconds, our test cars felt easily capable of posting the quoted figures, and blew us away with their performance. With the supercharging providing the push up to around 3500rpm from where the turbocharger takes over, the Polo can be hustled around back roads thanks to nicely-weighted, if slightly numb steering. The seven‑speed DSG gearbox is snappy and holds onto gears in ‘Sport’ mode, while the steering wheel paddles work well, although move when you turn the wheel itself. Torque steer also makes itself known on determined takeoffs. All in all then, the 2011 Polo GTI is a lot of fun. True, it most likely wouldn’t see which way its even more focused competitors went – it would undoubtedly track them down in a straight line, though – but trading on the GTI badge’s practicality with a sporting edge, it’s the most resolved performance Polo yet. We’ve got another Volkswagen UK Polo GTI coming in August to test for a more detailed evaluation. We can’t wait.  2011 VOLKSWAGEN POLO GTI Price £18,795 (3dr), £19,415 (5dr) // Engine 1.4 litres, supercharged and turbocharged, 178bhp // 0-62mph 6.9 seconds // Top speed 142mph // Weight 1269kg // Wheels/tyres 7.5J x 17”, 215/40 R17 // MPG 47.9 // CO2 139g/km 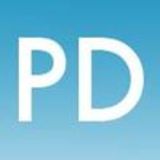