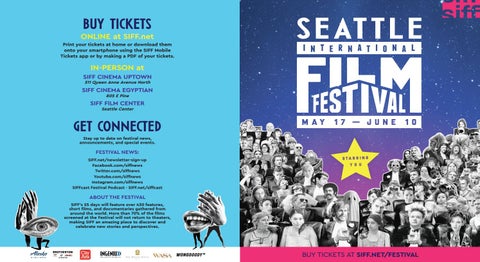 ONLINE at SIFF.net Print your tickets at home or download them onto your smartphone using the SIFF Mobile Tickets app or by making a PDF of your tickets.

GET CONNECTED Stay up to date on festival news, announcements, and special events.

ABOUT THE FESTIVAL SIFF’s 25 days will feature over 430 features, short films, and documentaries gathered from around the world. More than 70% of the films screened at the Festival will not return to theaters, making SIFF an amazing place to discover and celebrate new stories and perspectives.

A budding playwright sets her sights on a sweetseeming divorce in the hopes of lifting her spirits.

Introverted punk rocker Theo falls in love with the free spirited Mag on the streets of Montreal.

An eccentric Swedish man decides to put his sleepy town on the map by assembling the world’s longest layer cake.

Won’t You Be My Neighbor

An Afternoon with Melanie Lynskey

See Seattle’s own DJ NicFit reimagine the cult classic with a decades-spanning all Queen playlist performed live on two turntables.

Documentary that focuses on the life and career of Fred Rogers and his inspiring influences on children.

SIFF will welcome Melanie Lynskey to the stage for an interview featuring film clips from her career, followed by a screening of one of Lynskey’s latest films, Sadie.

Join My Goodness for a live accompaniment to the 1911 Italian silent film, a macabre tour de force inspired by Dante’s “Divine Comedy” featuring groundbreaking special effects and a cast of thousands.

A Tribute to Ethan Hawke

A biopic about famed poet Emily Dickinson and her supposed relationship with her sister-in-law, Susan.

Ethan Hawke will receive the Seattle International Film Festival Award for Outstanding Achievevment in Cinema and present his directorial debut, Blaze, about the life of burly singer-songwriter Blaze Foley.

Gay teens in a conversion therapy camp learn instead to embrace each other and themselves in this arresting drama.

A white Berkeley grad student discovers an unexpected talent for battle rapping in this gleefully transgressive satire produced by Eminem.