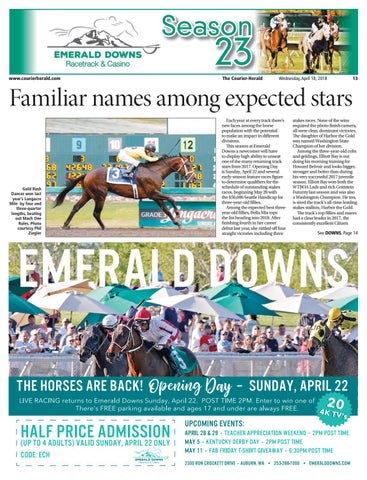 Each year at every track there’s new faces among the horse population with the potential to make an impact in different divisions. This season at Emerald Downs a newcomer will have to display high ability to unseat one of the many returning track stars from 2017. Opening Day is Sunday, April 22 and several early-season feature races figure to determine qualifiers for the schedule of outstanding stakes races, beginning May 20 with the $50,000 Seattle Handicap for three-year-old fillies. Among the expected best threeyear-old fillies, Bella Mia tops the list heading into 2018. After finishing fourth in her career debut last year, she rattled off four straight victories including three

stakes races. None of the wins required the photo finish camera, all were clear, dominant victories. The daughter of Harbor the Gold was named Washington State Champion of her division. Among the three-year-old colts and geldings, Elliott Bay is out doing his morning training for Howard Belvoir and looks bigger, stronger and better than during his very successful 2017 juvenile season. Elliott Bay won both the WTBOA Lads and rich Gottstein Futurity last season and was also a Washington Champion. He too, is sired the track’s all-time leading stakes stallion, Harbor the Gold. The track’s top fillies and mares had a clear leader in 2017, the consistently excellent Citizen See DOWNS, Page 14

Mach One Rules was Washington’s Horse of the Year in 2017. Photo courtesy Phil Ziegler

Kitty. Expected back for the upcoming meeting, Citizen Kitty moved forward in a big way during her five-year-old season. The versatile Washingtonbred won her first stakes

race in the Hastings in May and followed that up with two more added-money victories. When she wasn’t winning at Emerald Downs last year, she was finishing no worse than second. The $120,418 she banked in 2017 more than doubled her career earnings. The older horse division is the glamour division at Emerald Downs, consisting of horses with aspirations to compete in the prestigious Longacres Mile, this year August 12. Mach One Rules didn’t win the Mile last year but was a strong runner-up and led the meet in earnings at $135,250. He finally got the better of his torrid, two-year rivalry with stakes foe Barkley, first beating that rival in the Budweiser Stakes in June and also taking the Mt. Rainier Stakes and Muckleshoot Tribal Classic. Mach One Rules was named Washington Horse of the Year for 2017 and the son of Harbor the Gold is back for his five-year-old season. Last year’s Mile hero was Gold Rush Dancer, who returned to Washington to score by an impressive four and three-quarter lengths. The 2015 Gottstein Futurity winner at Emerald Downs came north to contest the Mile after an entire 2016 season in California in which he was named Top California-bred Three Year

Most training titles Tim McCanna: 10 Frank Lucarelli: 5 Jeff Metz: 3 Blaine Wright: 2 Old honors. The $110,000 earned in the Mile aided owner John Parker to the top spot in that category with earnings of $329,297. Parker successfully defended his Leading Owner title with 22 wins. Riser was spectacular during his three-yearold season and figures to be a solid foe to Mach One Rules and Gold Rush Dancer in 2018. A dynamic grey speedster, Riser is an Ohio-bred who traveled north from California to be the leader of his Emerald Downs division. He impressed in all his races, winning three of four starts, including a front-running triumph in the Emerald Downs Derby. Among trainers, native Washingtonian Blaine Wright developed Riser and Bella Mia and totaled 11 stakes scores last year, one off the track record total of Doris Harwood (2007 & 2009). Three of those stakes wins came on Washington Cup day, August 27, a one-day record for a local trainer. He was

tops in purse earnings with $819,232 and led in the race for most wins, 53-38 over Joe Toye. He also was the clear leader with a 36% strike rate, one of the highest in track history. Wright seeks his third consecutive leading trainer title. Frank Lucarelli has won five Emerald Downs training titles and sometime during the upcoming season he will become the first in track history to surpass the $10,000,000 in local purse earnings. He also has a chance to top Tim McCanna in local career victories, trailing 926-905. To the delight of his many fans, jockey Rocco Bowen is returning to Emerald Downs for 2018. The two-time defending riding champ rode over the fall and winter in northern California and will be the one to beat again locally. Julien Couton, leading jockey of 2015, was the track’s leading stakes jockey last year (6) despite not riding full time until the 33rd day of a 72-day meet. Look for returning regulars Javier Matias, Jennifer Whitaker, Jose Zunino, Leonel Camacho-Flores, Eswan Flores and Kevin Orozco to compete for the top mounts. 70 days of excitement at Emerald Downs begins Sunday, April 22!

Many tribes from around the nation will be competing in this year’s Indian Relay Racing and take the Muckleshoot Gold Cup. Photo courtesy Phil Ziegler

Tired of Horsing Around with Your Insurance?

Emerald Downs offers some type of promotion for each of its 67 live racing days in 2018. It begins with a TV giveaway on opening day — 20 4K TVs will be given away to lucky fans between races — and ends with a new $100,000 stakes race for 3-year-olds on closing day — the Getaway Stakes, a 1 1/16-mile race for 3-year-olds with the money provided by an anonymous donor. In between their will be Fabulous Fridays, twilight Saturdays, a Food Truck Festival, Armed Forces Day, First Responders Day, Fiesta Premio Esmeralda for Hispanics, Mother’s and Father’s Day, Equine Art Show, races for ostriches, camels, zebras, Corgis and Wiener Dogs, Fireworks Spectacular and much more. For sheer competition, however, nothing beats Indian Relay Racing. In fact, nothing else comes close. It’s three days of championship competition with many of the nation’s best Indian Relay teams converging on Emerald Downs. Tribes from Idaho, Montana, South Dakota, Oregon and Washington will be

represented, with Starr School of Browning, Montana looking to defend its Muckleshoot Gold Cup title from last year. The third annual Muckleshoot Gold Cup will be held June 8, 9 and 10 with three qualifying races Friday and Saturday, and three more races Sunday climaxed with the championship Gold Cup. The competition features over $75,000 in prize money and has proven an immediate hit with fans. “Until we held our first event here in 2016, most of us knew little or nothing about Indian Relay Racing,” said Emerald Downs Racetrack and Casino President Phil Ziegler. “But you didn’t need to be an expert to see that it was a very exciting and very serious competition.” In Indian Relay — the nation’s oldest sport with a history that goes back 500 years — teams race twice around the Emerald Downs one-mile track and exchange horses every half-mile. Each team’s rider must leap from one galloping horse to another in their assigned exchange box while See RELAY, Page 16

We enjoy working with the farmers, ranchers and growers in Washington and have done so for over 55 years.

HAVE A GREAT SEASON... WIN, PLACE OR SHOW!

Whether it’s for your farm, ranch, personal home, vehicles, trailers, stables and other risk exposures, we have the ability to do more detailed horse risks including boarding, breeding and training. Call today and let us help you make sure your insurance coverage meets your needs.

A track for everyone Butch Ducolon (left) with his grandson, Tyler Cornwell, 8, of Tacoma, examine the reader board at Emerald Downs on April 26th, 2015. Right, Joseph Steiner is congratulated for the first-place finish.

Get a Jump on Spring

PHOTOS BY KEVIN CLARK / THE HERALD

“I know Chevy trucks; I own two myself!”

other team members assist in handling the horses. It’s an enthralling, colorful competition. The Muckleshoot Tribe hosts the event as the

owners and operators of Emerald Downs, and the Muckleshoot Casino is sponsoring the competition. As mentioned before, there will be three relay races each day along with the regular full card of live Thoroughbred races. With Isiah Cross Guns leading the way, Starr School, a member of

Blackfeet Nation, won two of three heats including the final in capturing the 2017 Muckleshoot Gold Cup. Carlson Relay, also from Browning Montana, captured the inaugural Gold Cup in 2016. Emerald Downs’ admission is just $9 for adults, and ages 17 and under are admitted free. Box seats can

Here’s to another great year at Emerald Downs!

We Deliver Too! We are a Full Service Feed Store and More!

be purchased in advance by calling 253-288-7711. More information will be available at www.emeralddowns.com. Emerald Downs, located in Auburn, WA, is the premier Thoroughbred racetrack in the Northwest. The 2018 season begins on Sunday, April 22. Post time is 2 p.m.