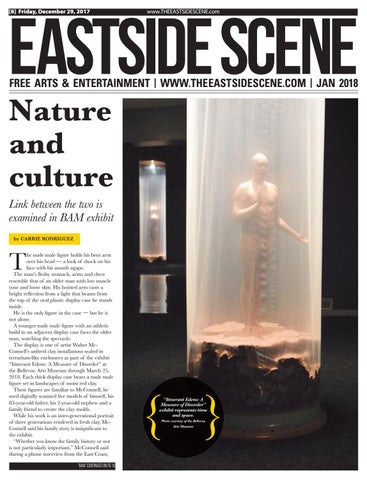 he nude male ﬁgure holds his bent arm over his head — a look of shock on his face with his mouth agape. The man’s ﬂeshy stomach, arms and chest resemble that of an older man with low muscle tone and loose skin. His hoisted arm casts a bright reﬂection from a light that beams from the top of the oval plastic display case he stands inside. He is the only ﬁgure in the case — but he is not alone. A younger nude male ﬁgure with an athletic build in an adjacent display case faces the older man, watching the spectacle. The display is one of artist Walter McConnell’s unﬁred clay installations sealed in terrarium-like enclosures as part of the exhibit “Itinerant Edens: A Measure of Disorder” at the Bellevue Arts Museum through March 25, 2018. Each thick display case bears a nude male ﬁgure set in landscapes of moist red clay. These ﬁgures are familiar to McConnell; he used digitally scanned live models of himself, his 83-year-old father, his 2-year-old nephew and a family friend to create the clay molds. While his work is an inter-generational portrait of three generations rendered in fresh clay, McConnell said his family story is insigniﬁcant to the exhibit. “Whether you know the family history or not is not particularly important,” McConnell said during a phone interview from the East Coast, ‘BAM’ CONTINUED ON PG 10

where he is a professor of ceramic art at Alfred University’s School of Art and Design in Alfred, New York. What is remarkable, however, is what his work addresses: the relationship between nature and culture. “They are completely encapsulated biospheres — there’s heat, light, water,” he said. The exhibit also represents time and space. The models were chosen mostly for their different ages. McConnell said he wants viewers to apprehend the different sense of time and space as they observe the fragile and ghostly figures. “They are not simply inert images,” he said. “Literally time is passing, things are also growing in the clay. It’s getting a little moldy, it’s getting a little green. They’re performing for you. There’s that sense that this is very temporary.” Intinerant edens are “impermanent, temporal constructions that address change, the mortal body and the inevitable decay of natural systems,” according

Join artist Walter McConnell for a special presentation exploring his work, inspiration and the process behind the creation of Itinerant Edens: A Measure of Disorder. This event will run from 6:308 p.m. Friday, Jan. 12, 2018 at the Bellevue Arts Museum, 510 Bellevue Way NE. Cost is free for members; $5 non-members. For more information, visit www. bellevuearts.org or call 425-519-0770.

to McConnell’s website, www.waltermcconnell. com. The figures are also not life-size. For example, in one display the 2-year-old figure is about 4 feet tall. Another installation off in the distance depicts one of the older male figures that is only 30 inches high. “Like in theater, you may have things rendered closer to you bigger,” McConnell

said, noting that the odd scales give viewers the sense of an accelerated perspective. The figures set up throughout the different spaces at the Bellevue Arts Museum are choreographed to work in a certain way, he added. The figures were digitally scanned using a full-body scanner, housed in the School of Human Ecology at Cornell University. The scanner produced the data files, which are CNC milled or 3D

printed, which were used to create plaster molds. McConnell said his exhibit, which contains three tons of beautiful red terracotta clay, was modeled on site over the course of two weeks. Several people helped him put the exhibit together, including 17 University of Washington students and his daughter, who is an artist from Baltimore. In addition to the relationship between nature

and culture, as well as time and space, he said the nude Adam-like figures in his exhibit also reference the beginnings of life itself. “You couldn’t help drum up creation myths” that cross time and culture, said McConnell, whose work has been featured at venues such as Harvard Center for the Arts; Denver Art Museum and The Freer/Sackler Galleries of the Smithsonian. He is represented by Cross Mackenzie Gallery in

Washington, DC. The figure’s encapsulation signifies an act of preservation akin to a terrarium of rare flora that are enveloped in condensation as heat and light draw moisture from the clay. The sculpted clay forms “perspire like slow fountains, releasing their moisture to their containers,” according to his website. “You get the sense that it’s ephemeral — that we’re all vulnerable,” McConnell said.

Laugh | Dustin Ybarra at the Parlor Dustin Ybarra is coming to Bellevue in January. The comic was seen most recently in recurring roles on the FOX series “Gotham,” the ABC series “The Goldbergs,” and the CBS series “Battle Creek.” Other TV credits include recurring roles on the cable series “Californication” and the NBC series “The Player.” His recent movies include “Ted 2,”“Hop,” “We Bought a Zoo,” “Date and Switch,” and “21 & Over.” For more information on Ybarra, visit www.parlorlive.com.

Watch | 2nd Saturday Film “Rope” will play at Issaquah City Hall. In the 1948 movie by Alfred Hitchcock, two men strangle their classmate, hide his body in their apartment and invite his friends and family to a dinner party as a means to challenge the “perfection” of their crime. For more information, visit downtownissaquah.com. When: 7 p.m., Jan. 13, 2018 Where: Eagle Room, Issaquah City Hall, 130 E Sunset Way, Issaquah

Dance | Once On This Island In almost non-stop Caribbean song

and dance, “Once On This Island” tells the story of Ti Moune, a peasant girl who rescues and falls in love with Daniel, a wealthy boy from the other side of her island. When Daniel is returned to his people, the fantastical gods who rule the island guide Ti Moune on a quest to test the strength of her love against the powerful forces of prejudice and hatred. The performance will be directed by Faith Russell, musically directed by David Duvall, choreographed by Kristin Burch. For more information, visit studioeast.org/once-on-this-island When: Jan. 26-Feb. 10, 2018 Where: Studio East, 11730 118th Ave. NE, Ste. 100, Kirkland

Northwest Wine: Raise a glass to new wines on the way

The 2017 harvest has all but wrapped up. Walk into any winery in the Pacific Northwest and in the cellar red and white wines are bubbling away, yeast happily converting the sugar to alcohol. It takes a few weeks for white wine grape juice to complete the magical process of becoming wine. That typically happens in stainless steel tanks, vessels that can be used repeatedly for years, seriously cutting the cost of winemaking when using $1,000 oak barrels, which sometimes can rob white wines of the clean freshness. By spring, winemakers will be thinking about bottling these new white and pink wines. Unlike reds, they don’t gain a lot of complexity by aging, except in the rare cases of Riesling, Sèmillon and whites blends from Bordeaux and the spectacular Chardonnays of Chablis. Do you still have few bottles of white and pink wines hanging around? It’s time to drink up and make room for new wines in a few months. Here are a few white and pink wines, all priced at $15 and under that we’ve tasted. Look for them at your favorite wine merchant or contact the wineries.

aging help create aromas of pear butter, light honeyed toast and lemon custard that transcend into a flavors hinting at a spoonful of Lemon Chiffon pie.

Milbrandt Vineyards 2016 Rosé, Columbia Valley, $13: Even though Emily Haines left Milbrandt Vineyards last summer for the Sierra Foothills, wines that she produced continue to win plaudits from judges. One of first wines released from her final harvest was this stunning pink blend of Syrah (75%) and Tempranillo off six vineyards, all picked around Brix 21. Aromas of nectarine, freesia and pear are followed by a light-bodied, fruit-forward drink reminiscent of fresh strawberries and watermelon. This fall, it earned best of class at the fifth annual Great Northwest Invitational Wine Competition.

of Chardonnay, Pinot Gris and Muscat that reveals fresh, fantastic aromas and flavors of buttered toast, honeysuckle, peaches and tropical fruit. A hint of apricot and lime add complexity to the finish. It received a gold medal and went on to win best of class at the 2017 Wenatchee Wine & Food Festival judging. Columbia Winery 2014 Chardonnay, Columbia Valley, $14: Sean Hails’ production facility for Columbia Winery sits in the heart of Washington’s Yakima Valley near Sunnyside, and the string of hot vintages prompted him to target the cooler portions of the Valley for this Chardonnay. Some oak and eight months of surlie

Tall Sage 2015 Chardonnay, Columbia Valley, $13: In 1997, Walter Clore’s planting advice for orchardist/ rancher Arvid Monson was “find a tall sage,” and that led to Goose Ridge Vineyards - a 2,500-acre planting near Richland, Wash. Monson died in 2014 at age 73, and this consumer-minded second label adds to his legacy. It opens with a garden full of flowers, lemon, apple, river rock and coriander. Those notes make their way to the palate with a beautiful mouth feel of Asian pear and nectarine that’s capped by lemony acidity. Nine Hats Wines 2016 Riesling, Columbia Valley, $14: The sister label of Walla Walla’s Long Shadows Vintners program is spearheaded by the brilliant Gilles Nicault, who doubled production of this Riesling over the 2015 vintage. And yet, there’s no drop-off. This merited a gold medal at the 2017 Walla Walla Valley Wine Competition. Andy Perdue and Eric Degerman run Great Northwest Wine, an award-winning media company. Learn more about wine at www.greatnorthwestwine.com

shades that simplify your life. To see PowerView in motion, contact us today.

*The PowerView® App and additional equipment required for programmed operation. © 2017 Hunter Douglas. All rights reserved. All trademarks used herein are the property of Hunter Douglas.