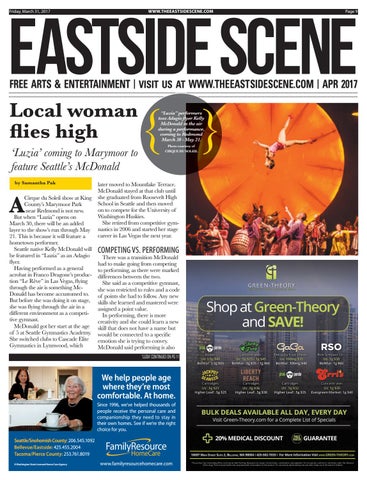 Cirque du Soleil show at King County’s Marymoor Park near Redmond is not new. But when “Luzia” opens on March 30, there will be an added layer to the show’s run through May 21. This is because it will feature a hometown performer. Seattle native Kelly McDonald will be featured in “Luzia” as an Adagio ﬂyer. Having performed as a general acrobat in Franco Dragone’s production “Le Rêve” in Las Vegas, ﬂying through the air is something McDonald has become accustomed to. But before she was doing it on stage, she was ﬂying through the air in a diﬀerent environment as a competitive gymnast. McDonald got her start at the age of 5 at Seattle Gymnastics Academy. She switched clubs to Cascade Elite Gymnastics in Lynnwood, which

{ { “Luzia” performers toss Adagio ﬂyer Kelly McDonald in the air during a performance, coming to Redmond March 30 - May 21. Photo courtesy of

later moved to Mountlake Terrace. McDonald stayed at that club until she graduated from Roosevelt High School in Seattle and then moved on to compete for the University of Washington Huskies. She retired from competitive gymnastics in 2006 and started her stage career in Las Vegas the next year.

There was a transition McDonald had to make going from competing to performing, as there were marked diﬀerences between the two. She said as a competitive gymnast, she was restricted to rules and a code of points she had to follow. Any new skills she learned and mastered were assigned a point value. In performing, there is more creativity and she could learn a new skill that does not have a name but would be connected to a speciﬁc emotion she is trying to convey. McDonald said performing is also ‘LUZIA’ CONTINUED ON PG 11

Since Since 1996, 1996, we’ve we’ve helped helped thousands thousands of of people people receive receive thethe personal personal carecare and and companionship companionship theythey need need to stay to stay in in their their own own homes. homes. SeeSee if we’re if we’re the right the right choice choice forfor you.you.

This product has intoxicating eﬀects and may be habit forming. Marijuana can impair concentration, coordination, and judgment. Do not operate a vehicle or machinery under the inﬂuence of this drug. There may be health risks associated with consumption of this product. For use only by adults twenty-one and older. Keep out of the reach of children.

StoryBook Theater has adapted “A Little Mermaid,” which follows Sirena, a little mermaid who dreams of running and dancing. In this version of the classic fairy tale, the audience decides whether Sirena should keep her legs or high-tail it back to sea. Tickets are $15. For more information or to purchase tickets, visit kpcenter. org or call (425) 893-9900.

feature a main character as they go into his dream and follow his journey of discovery. “A dream allows you a lot of flexibility in terms of storyline,” Shaub said. Shaub said it takes about two years to plan and design a new Cirque du Soleil show. Performance artists like McDonald are not brought on board until about a yearand-a-half into the process. McDonald joined “Luzia,” which is currently in San Jose, in October 2015 and knew the show would

LISTEN | EVE 6 Platinum-selling rock artists Eve 6 are coming to Kenmore. The California-based band, best known for their singles “Inside Out” and “Here’s to the Night,” will be in town for one night only for a show co-presented by the Northshore Performing Arts Center Foundation and Capps Club. Tickets are $25 for general admission ($30 at the door) and $35 for guaranteed seating.

be opening with a North American tour starting in Toronto. She “was thrilled” to learn the show would be coming to the Pacific Northwest. McDonald is excited to be doing the show in her hometown and performing for those who have helped her get where she is. She said with a smile that there’ll be a lot of family and friends there to support her on opening day. Shaub joked that they extended the show’s run just for McDonald.

A LITTLE BIT OF EVERYTHING

When asked about their favorite parts of the show, neither Shaub nor McDonald could pinpoint a particular scene or section. McDonald said there are high-energy group numbers as well as solo acts that “truly are breathtaking.” “There’s nothing you don’t want to miss,” she said. Like other Cirque du Soleil shows, “Luzia” features circus-style acts but showrunners have also added layers that have never been done. Shaub said the hoop

Join artEAST for a “wildly creative” evening of fine wine, delicious desserts and amazing appetizers for a fundraiser to support the local art community. The event will feature a live and silent auction filled with pieces handcrafted by artEAST artists. For more information, visit arteast.org/2017/01/swirl-2017.

said the show will feature rain, which is a technological achievement to have on a touring show consistently. “That’s something we’ve never done in a Big Top show,” he said. For ticket information, visit www.cirquedusoleil.com.

divers are performing on a treadmill that moves back and forth, which “adds a new element” to the act. McDonald added that in the swing-toswing act, performers are flying higher on larger swings. In addition, Shaub

OF DREAMS AND INSPIRATION

“Luzia” will take audiences into the world of Mexico, as the show takes its inspiration from Mexican culture, landscapes and architectural wonders. Mark Shaub, artistic director for “Luzia,” said the idea came from the show’s director, Daniele Pasca, who had lived in Mexico for 10 years and pitched the idea of a Mexicaninspired show to Cirque du Soleil. Despite its source of inspiration, Shaub said the show is not a travelogue. He said while there is not really a storyline, “Luzia” does

different from competing because the latter is more individuallyfocused and the former is more collaborative, as she works with others to create an entire scene. Despite these differences, McDonald said there are some similarities, such as the mental preparation she goes through in visualizing her performance before a show. Another difference McDonald has noted is the environment. A competitive environment stays pretty much the same, but while performing on stage, she has to take herself into a new world, as she could be performing in a jungle scene, in the desert or even in a different time period.