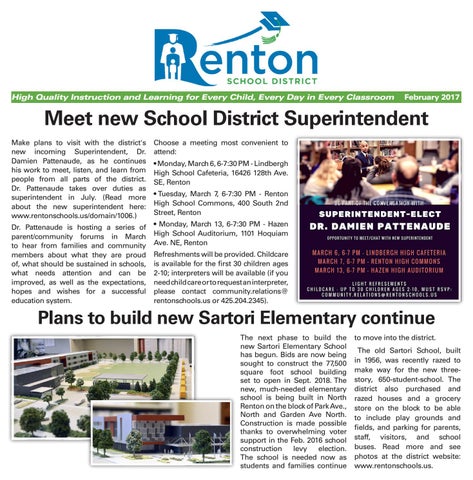 High Quality Instruction and Learning for Every Child, Every Day in Every Classroom

Meet new School District Superintendent Make plans to visit with the district's new incoming Superintendent, Dr. Damien Pattenaude, as he continues his work to meet, listen, and learn from people from all parts of the district. Dr. Pattenaude takes over duties as superintendent in July. (Read more about the new superintendent here: www.rentonschools.us/domain/1006.) Dr. Pattenaude is hosting a series of parent/community forums in March to hear from families and community members about what they are proud of, what should be sustained in schools, what needs attention and can be improved, as well as the expectations, hopes and wishes for a successful education system.

Plans to build new Sartori Elementary continue The next phase to build the new Sartori Elementary School has begun. Bids are now being sought to construct the 77,500 square foot school building set to open in Sept. 2018. The new, much-needed elementary school is being built in North Renton on the block of Park Ave., North and Garden Ave North. Construction is made possible thanks to overwhelming voter support in the Feb. 2016 school construction levy election. The school is needed now as students and families continue

to move into the district. The old Sartori School, built in 1956, was recently razed to make way for the new threestory, 650-student-school. The district also purchased and razed houses and a grocery store on the block to be able to include play grounds and fields, and parking for parents, staff, visitors, and school buses. Read more and see photos at the district website: www.rentonschools.us.

Girl Code: How a Renton Park Elementary teacher is working to close the gap between male and female computer scientists Girls at Renton Park Elementary School are learning to use computer coding in an early-morning club, to better understand how computer coding drives so many different electronic devices and programs. The club also works to chip away at the male-dominated field of computer coding. Renton Park teacher David Bussey had been reviewing statistical data showing a steady decrease in the percentage of female students participating in computer science courses in high school and college, and receiving computer science degrees. So, he started working on a way to provide female students with the opportunity to be exposed to computer science. His idea was to start a girls coding club using Google CS First, a free program tailored for elementary students. Bussey invited the schoolâ&#x20AC;&#x2122;s 5th-grade girls to attend a before-school club once a week, for free. Sixteen girls signed up and began learning computer science and coding. They recently advanced to coding a program that a robot can read and follow, like programming a robot to negotiate through a maze (pictured). The girls in the club have also used code.org resources, created paper circuit cards,

and most recently, through a grant from the Friends of Renton Schools foundation (www.friendsofrentonschools.org), the Renton Park girls, along with many other students at many other schools, now have access to several different robots that they

Middle school students become engineers for a day Engineers from the Boeing Company recently visited students in Dave Huffâ&#x20AC;&#x2122;s technology classroom at McKnight Middle School. The classroom presentation helped to celebrate National Engineers Week and show students all the cool things engineers do, while encouraging students to pursue a career in engineering. The Boeing

presentations included a class experiment on airfoils, a structure with curved surfaces designed to give a favorable ratio of lift to drag in flight; airfoils are used as the basic form of the wings, fins, and horizontal stabilizer of most aircraft. Students were thoroughly engaged and entertained when they had a chance to build their own airfoil.

can code. The girls say theyâ&#x20AC;&#x2122;re having a lot of fun in the club. But more importantly, they now have the confidence and skill to take on computer coding classes in high school, college, and maybe as a career.

Lakeridge Elementary 4th-grader Dylan Deo won 1st place in both the district and state categories for this year’s Veterans of Foreign Wars (VFW) Essay Contest. A total of 22 students (18 from Lakeridge

Elementary and three from Dimmitt Middle School) also won awards in the local category in the annual student essay contest. All of the winners were celebrated recently at an awards ceremony at Skyway VFW. This

Hazen High School and McKnight Middle School students on the robotics teams recently competed against 146 other teams in the FIRST Tech Challenge Super Regional Competition. Hazen High’s team qualified for the Super Regionals in Tacoma in early March. The students were able to train and compete in the robotics competitions thanks to funding from the Friends of Renton Schools (FoRS) foundation. The non-profit organization, managed by local volunteers,

has been funding science, robotics, music, and arts programs in schools through the Renton School District for more than 10 years. Through donations from local citizens and businesses, FoRS has helped fund robot kits used during Summer School Camps (which are free to students and includes transportation to ensure all kids can participate). You can support efforts to fund these student programs by visiting www. friendsofrentonschools.org.

year’s essay theme was: “Why are men and women who serve in the military special?” Dylan’s winning essay also garnered him a $150 cash prize.

School foundation helping to improve classroom instruction and provide after-school programs The Friends of Renton Schools (FoRS) foundation recently awarded over $7,000 to teachers in schools throughout the Renton School District. The grants are possible thanks to individual and business donations to the foundation. Some teachers were first year teachers and others were teams of teachers. Here are some of the items that FoRS funded: • Spanish novels for middle and high school students • Software for after-school programs • Rhythm instruments • STEM materials for kindergarten classrooms

Middle school students and families throughout Renton School District are taking steps to be more prepared for college. Students and families from Dimmitt, McKnight and Nelsen middle schools are increasingly committing to education beyond high school and are also enrolling in the stateâ&#x20AC;&#x2122;s College Bound Scholarship program which provides state funded financial aid to low-income

students who may not consider college a possibility because of the cost. Governor Jay Insleeâ&#x20AC;&#x2122;s office recently recognized Renton School District for being among the top districts in the state to increase the number of middle school families making a commitment to attend college. Learn more about the College Bound Scholarship program at www.wsac.wa.gov/ college-bound.

Hazen High student named National Merit Finalist Hazen High School senior BethTuschhoff is a National Merit Scholarship Finalist. Beth was selected based on her academic record, leadership abilities, and her exceptional performance on the Preliminary SAT/ National Merit Scholarship Qualifying Test (PSAT) in critical reading, mathematics and writing. She is among only 15,000 Finalists who made it to this level of the scholarship competition, representing less than one percent of all U.S. high school seniors. After graduation, Beth plans to study mathematical biology at either the University of Idaho or Gonzaga University. Her goal is to become a scientist to study genetics and diseases to help find cures for human genetic disorders. Click the link to read more about Beth.