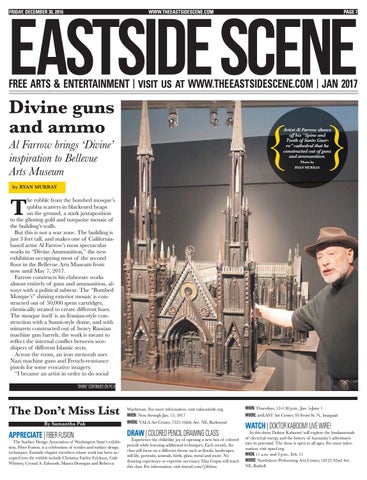 { { Artist Al Farrow shows oﬀ his “Spine and Tooth of Santo Guerro” cathedral that he constructed out of guns and ammunition.

he rubble from the bombed mosque’s qubba scatters in blackened heaps on the ground, a stark juxtaposition to the glinting gold and turquoise mosaic of the building’s walls. But this is not a war zone. The building is just 3 feet tall, and makes one of Californiabased artist Al Farrow’s most spectacular works in “Divine Ammunition,” the new exhibition occupying most of the second ﬂoor in the Bellevue Arts Museum from now until May 7, 2017. Farrow constructs his elaborate works almost entirely of guns and ammunition, always with a political subtext. The “Bombed Mosque’s” shining exterior mosaic is constructed out of 50,000 spent cartridges, chemically treated to create diﬀerent hues. The mosque itself is an Iranian-style construction with a Sunni-style dome, and with minarets constructed out of heavy Russian machine gun barrels, the work is meant to reﬂect the internal conﬂict between worshipers of diﬀerent Islamic sects. Across the room, an iron menorah uses Nazi machine guns and French-resistance pistols for some evocative imagery. “I became an artist in order to do social ‘DIVINE’ CONTINUED ON PG 9

The Surface Design Association of Washington State’s exhibition, Fiber Fusion, is a celebration of textiles and surface design techniques. Eastside chapter members whose work has been accepted into the exhibit include Christina Fairley Erickson, Gale Whitney, Crystal A. Edwards, Maura Donegan and Rebecca

Wachtman. For more information, visit valaeastside.org. WHEN: Now through Jan. 15, 2017

Experience the child-like joy of opening a new box of colored pencils while learning additional techniques. Each month, the class will focus on a diﬀerent theme such as ﬂorals, landscapes, still life, portraits, animals, birds, glass, metal and more. No drawing experience or expertise necessary. Ekta Gupta will teach this class. For information, visit tinyurl.com/j5fs6uw.

In this show, Doktor Kaboom! will explore the fundamentals of electrical energy and the history of humanity’s adventures into its potential. The show is open to all ages. For more information, visit npacf.org. WHEN: 11 a.m. and 3 p.m., Feb. 11 WHERE: Northshore Performing Arts Center, 18125 92nd Ave. NE, Bothell

commentary,” he said. “My first works were in something I called the Icarus series. I followed that with the African series. They were bronze sculptures with war machines. The public did not respond to it. Seeing naked black men with weapons scared the hell out of most white folks.” He dropped the figures and moved on to second-hand weapons, welding the steel structures together in reliquaries, cathedrals, mosques, synagogues and other places or symbols of worship. One of the most meaningful works in the exhibition (which consists of more than 20 years of the 73-year-old artist’s work) is the Burnt Church. The skeletal remains of a county Gothic church is literally made of French rifles dropped by French soldiers at Verdun. The poilu died on that battlefield by the hundreds of thousands, and the shell casings, rifles and bones remain to

tell the story. “I have a lot of reverence for this piece,” Farrow said of the scorched, twisted columns. “These are dead men’s guns.” Farrow gets most of his supplies from gun shows and from gun dealers, where often he can buy firearms and ammunition in bulk. “I’m probably on a list somewhere, but I’m sure the FBI or the ATF [Bureau of Alcohol, Tobacco, Firearms and Explosives] has bigger things to worry about,” he joked. Despite using the religious imagery, Farrow said he has the same respect for all the religions he represents, and does considerable research in architecture and aesthetics before undertaking a new project. As a draftsman in a previous life, his abilities to lay out the buildings on paper ahead of time make things a little easier on himself and his assistants. But risks still exist. While using a blowtorch to create the bombed effect of

“Bombed Mosque,” one of the supposedly fired primers exploded and shot him in the neck, luckily just creating a glancing burn. Farrow didn’t become part of his own artwork, but he does use bone as Catholic relics in his works, inventing “Santo Guerro” (Saint War) as inspiration for reliquaries. His most complex work, a Frenchinspired Catholic Gothic cathedral called “The Spine and Tooth of Santo Guerro” uses body parts as relics (no points for guessing which ones) amid the bayonet windows, anti-aircraft gunsight cross and flying buttresses. His spray-painted church and mosque doors are another set of works meant to provoke and engender conversation, Farrow said. “I want people to wonder why violent elements are used to create religious elements.”

Museum is located at 510 Bellevue Way

‘Railroading’ cross stitch by Bellevue man featured in national calendar in Watermark’s full-color wall calendar, “Expressions 2017.” The calendar is now in its 17th edition. Thomas was born in an Arizona copper mining

town that no longer exists, and now lives in Bellevue, where he and his wife have been Pacific Regent residents for 14 years. According to Thomas, they love the community feeling, their neighbors and being asked to share his art. In addition to being selected for “Expressions 2017,” he recently participated in Pacific Regent’s 90th Birthday Art Show. Complimentary copies of Expressions 2017 are available at Pacific Regent, 919 109th Ave. NE in Bellevue, while supplies last. All 182 submissions, including that of one of many other artists residing at Pacific Regent, are available for viewing at tinyurl. com/jd87vvq. “One of the ways we

help our residents thrive is by making it easy for them to connect with diverse interests and passions,” said C. Jill Hofer, direc-

tor of communication for Watermark. “As anyone can see by viewing the pages of ‘Expressions 2017’ or scrolling through our

online gallery, art is an important creative outlet for a great number of our residents. Their talent is ageless.”

We Wehelp help people people age age where where they’re they’re most most comfortable. comfortable. AtAt home. home. Since Since 1996, 1996, we’ve we’ve helped helped thousands thousands of of people people receive receive thethe personal personal carecare and and companionship companionship theythey need need to stay to stay in in their their own own homes. homes. SeeSee if we’re if we’re the right the right choice choice forfor you.you.

A panel of judges has selected Bellevue resident Bob Thomas’ needlepoint, “Railroading,” from 182 art submissions nationwide, for one of 12 featured spots