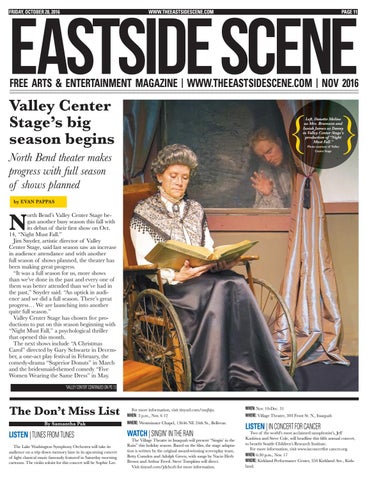 orth Bend’s Valley Center Stage began another busy season this fall with its debut of their ﬁrst show on Oct. 14, “Night Must Fall.” Jim Snyder, artistic director of Valley Center Stage, said last season saw an increase in audience attendance and with another full season of shows planned, the theater has been making great progress. “It was a full season for us, more shows than we’ve done in the past and every one of them was better attended than we’ve had in the past,” Snyder said. “An uptick in audience and we did a full season. There’s great progress… We are launching into another quite full season.” Valley Center Stage has chosen ﬁve productions to put on this season beginning with “Night Must Fall,” a psychological thriller that opened this month. The next shows include “A Christmas Carol” directed by Gary Schwartz in December, a one-act play festival in February, the comedy-drama “Superior Donuts” in March and the bridesmaid-themed comedy “Five Women Wearing the Same Dress” in May. ‘VALLEY CENTER’ CONTINUED ON PG 13

LISTEN | TUNES FROM TUNES The Lake Washington Symphony Orchestra will take its audience on a trip down memory lane in its upcoming concert of light classical music famously featured in Saturday morning cartoons. The violin soloist for this concert will be Sophie Lee.

LISTEN | IN CONCERT FOR CANCER

WATCH | SINGIN’ IN THE RAIN

The Village Theatre in Issaquah will present “Singin’ in the Rain” this holiday season. Based on the ﬁlm, the stage adaptation is written by the original award-winning screenplay team, Betty Comden and Adolph Green, with songs by Nacio Herb Brown and Arthur Freed. Steve Tompkins will direct. Visit tinyurl.com/jdyhczb for more information.

Because the focus of this column is to explore the symbiotic relationship between beer, food and culture, it is essential to take into account the seasonal change that affects all three in the most profound of ways. Oktoberfest just past and though Germany won’t be featured every month, I would be remiss if I didn’t delve into the quaffable Märzen beer and savory roasts that fuel the world’s biggest Volksfest (people’s festival) in Münich, Germany. The time of harvest is upon us, and in medieval Europe preparations for the winter months were in full swing by mid-September. Grains such as barley, wheat and rye were being harvested and hunters roamed the woods and valleys of Bavaria for deer and boar. This cooling also marked a transition for German brewers half a millennium ago. Brewers in the southern state of Bavaria found it difficult to maintain the flavor of their beer during the summer months, due to the increase of airborne microbes that would spoil the brew. Beer brewed from October to March, however, was stored in cool alpine caves during the summer to preserve the well-balanced flavor. During late winter, brewers made a strong, malty spring lager beer called Märzen (and later, Oktoberfestbier) — from the German word März, which means March. This Märzen beer, with its additional malt and hops, stored and lagered perfectly in the cool caves of Alpine valleys, and drank clean and full-bodied during spring and summer. As fall approached, the well-preserved lager fermented longer and became stronger. Toward the end of September, the last of the year’s stored Märzen had to be polished off to allow brewers to begin filling those barrels with fresh beer for the coming winter. The official Oktoberfest wasn’t inaugurated until several years later, but it seems obvious why it was held during this time of year, when jolly Germans did their duty and drank liters of the year’s last Märzen. In 1812, crown prince of Bavaria, Ludwig wed Princess Therese of Saxony. He naturally chose this festive time of year to do it and held his wedding celebrations on a vast field outside of Munich. The festival lasted weeks, coincided with the drinking of the year’s last, strong Märzen beer and included the slaughter of hundreds of oxen, chickens and boar to feed the revelers. It was such a hit with Bavarians, that Ludwig decided to celebrate his wedding annually and the festival has taken place there to this day. Official Oktoberfest beer can only be brewed within the confines of the city of Munich, but the six breweries that do so — Augusitner, Paulaner, Hofbräu, Löwenbräu,

Hacker-Pshorr and Spaten — distribute widely and can be easily found at bottle shops and supermarkets on the Eastside. This style of beer is brewed to drink clean, like a lager, but typically contains more malt backbone and ranges from golden in color to a deep amber hue. With a climate here in Western Washington similar to southern Germany, an amberhued, grainy Märzen beer paired with slow roasted ham hock (Scheinhaxe) can’t be beat. Schweinhaxe is a staple of Bavarian beer halls. The savory pork roast is typically paired with rye bread and braised red cabbage. Golden Steer in Redmond is an excellent butcher shop for this kind of cut and for traditional red kraut. World Market and Liebchen Delicatessen are also great options. This recipe will work perfectly for your own harvest gathering of friends and family. Schweinhaxe: Schweinshaxe or Pork Knuckle Salt and pepper Garlic clove 1 bottle Märzen or Oktoberfestbier Garlic cloves 1 onion rough chopped Caraway seed (whole or ground) Preheat oven to 350 degrees F. Place the hock on a bed of rough chopped onions and lightly season with salt and pepper. Moisten with a splash of Oktoberfestbier/ Märzen. Rub the hock with the clove of garlic and sprinkle whole or ground caraway seeds over the roast depending on the flavor you desire. Roast in the oven for 4 hours, occasionally basting the roast with beer. When the internal temp reaches 200 degrees, turn the heat up to 450 degrees, continue to baste with beer and let the skin crisp for about 10-15 minutes. The traditional Schweinhaxe serves one. Serve with rye bread, braised red cabbage and Märzen.

About the author Joe Flick hails from Redmond and has a degree in anthropology from the University of Montana.

The process of choosing which plays to perform at the theater involved polling their actors, directors, and audience, Snyder explained, and taking the list created before the theater’s play selection committee. “This year was a combination of things. We put out an email and other things to all the members and our email list to send us in the two most compelling shows you’ve seen,” he said. “We had a list of 100 plays sent in. They looked down through that list and came up with suggested shows for us to read. The directors also chose shows they had a specific interest in, between the list and what the directors were passionate about we came up with the season.” In forming the show schedule, Snyder explained that the play selection committee tried to keep the season varied through genre, subject matter, and community interest. “Everyone has opinions if the season is varied enough, do we have shows we think the community is interested in? Hitting traditional comedy, intrigue and hitting timely issues,” he said.

“I think our season is fairly well-balanced. We have thriller to a traditional favorite ‘Christmas Carol’ to discussing race (in ‘Superior Donuts’) and ending on a strong comedy to close the season.” For this season, the theater has created a new schedule to be more consistent with show times among the different productions being run. Every opening weekend will have shows on Friday and Saturday, the next two weekends will have shows on Thursday, Friday, Saturday and a Sunday matinee, Snyder explained. “Every one of the shows has something special about it which is what makes a great season,” Snyder said. “For me, if I’ve seen show or read a show and keep thinking about it months later, that’s a compelling story.” Snyder also noted that the work the theater does would not be possible without the help of all the volunteers that spend their time at the theater. “Night Must Fall,” the theater’s first show of the 2016-17 season, runs until Oct. 29. For tickets and more information about the next shows, visit valleycenterstage.org.

10697 Main Street Suite 2, Bellevue, WA 98004 I 425-502-7033 I GREEN-THEORY.COM This product has intoxicating effects and may be habit forming. Marijuana can impair concentration, coordination, and judgment. Do not operate a vehicle or machinery under the influence of this drug. There may be health risks associated with consumption of this product. For use only by adults twenty-one and older. Keep out of the reach of children.

Buying or Selling your home doesn’t have to be Scary! Call Beth today and put your greatest asset in the hands of a seasoned professional!

Save with rebates on PowerView™ Motorization, the intelligent shades that

* Choose parties. Order yourmove shades now and be ready automatically to a schedule youfor set.*holiday among the most popular