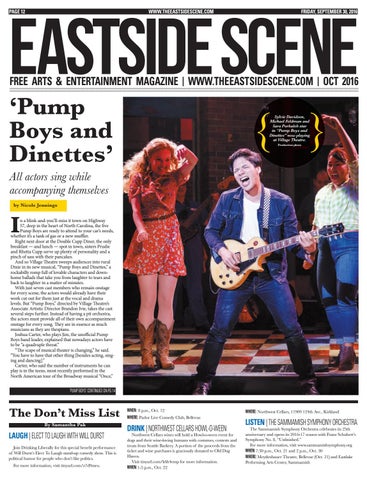 All actors sing while accompanying themselves by Nicole Jennings

n a blink-and-you’ll-miss it town on Highway 57, deep in the heart of North Carolina, the five Pump Boys are ready to attend to your car’s needs, whether it’s a tank of gas or a new muffler. Right next door at the Double Cupp Diner, the only breakfast — and lunch — spot in town, sisters Prudie and Rhetta Cupp serve up plenty of personality and a pinch of sass with their pancakes. And so Village Theatre sweeps audiences into rural Dixie in its new musical, “Pump Boys and Dinettes,” a rockabilly romp full of lovable characters and downhome ballads that take you from laughter to tears and back to laughter in a matter of minutes. With just seven cast members who remain onstage for every scene, the actors would already have their work cut out for them just at the vocal and drama levels. But “Pump Boys,” directed by Village Theatre’s Associate Artistic Director Brandon Ivie, takes the cast several steps further. Instead of having a pit orchestra, the actors must provide all of their own accompaniment onstage for every song. They are in essence as much musicians as they are thespians. Joshua Carter, who plays Jim, the unofficial Pump Boys band leader, explained that nowadays actors have to be “a quadruple threat.” “The scape of musical theater is changing,” he said. “You have to have that other thing [besides acting, singing and dancing].” Carter, who said the number of instruments he can play is in the teens, most recently performed in the North American tour of the Broadway musical “Once,”

LAUGH | ELECT TO LAUGH WITH WILL DURST Join Drinking Liberally for this special beneﬁt performance of Will Durst’s Elect To Laugh stand-up comedy show. This is political humor for people who don’t like politics. For more information, visit tinyurl.com/z7d9meo.

Northwest Cellars wines will hold a Howl-o-ween event for dogs and their wine-loving humans with costumes, contests and treats from Seattle Barkery. A portion of the proceeds from the ticket and wine purchases is graciously donated to Old Dog Haven. Visit tinyurl.com/k6h4emp for more information. WHEN: 1-5 p.m., Oct. 22

The cast of “Pump Boys and Dinettes” features Tony Award-winning Levi Kreis and his superb piano skills. The set is simple in that it doesn’t change, yet it is filled with plenty of rich details that evoke the Americana highway life, including large, hanging neon diner signs and an actual truck parked on stage. The light design uses a full range of colors that create a variety of moods tailored to each song, with flashing greens for rocking out and a single spotlight for a longing ballad of unrequited love. Tony Award-winning Levi Kreis wows with his piano playing as L.M. Kreis won the Tony for Best Featured Actor in a Musical in 2010 for his role as Jerry Lee Lewis in “Million Dollar Quartet,” a role he originally played at Village Theatre, the second theatre in the nation to put “Million

PAYING TOO MUCH $ FOR YOUR WEED? US

Dollar Quartet” on. “Pump Boys” also features Michael Feldman as Jackson, Olivia D. Hamilton as Eddie and James “Rif ” Reif as Drummer at the gas pump, and Sylvie Davidson as Prudie and Sara Porkalob as Rhetta in the diner.

curring every two years that focuses on the work of established and emerging Northwest artists, craftspeople and designers living and working in Washington, Oregon, Idaho, Alaska, Montana and British Columbia. The museum received a record-breaking 330 applications for this year’s biennial. From this talented and vast pool of applicants, 49 artists were chosen to participate. During the run of BAM Biennial 2016: Metalmorphosis, two awards including cash prizes of $5,000 will be announced. The exhibit runs through January 2017. For information, visit bellevuearts.org.

We Wehelp help people people age age where where they’re they’re most most comfortable. comfortable. AtAt home. home. Since Since 1996, 1996, we’ve we’ve helped helped thousands thousands of of people people receive receive thethe personal personal carecare and and companionship companionship theythey need need to stay to stay in in their their own own homes. homes. SeeSee if we’re if we’re the right the right choice choice forfor you.you.

where he was also required to be his own accompanist. He laughed that he will “have culture shock” when he goes back to a musical with a pit orchestra. Music Director R.J. Tancioco said that the callback process essentially forced the actors to form a band and make music together with no prior rehearsal. “We had a plethora of instruments in one room,” he said. “We said, ‘Pick an instrument in this room, and we want you to jam.’ They were creating arrangements on the spot. We wanted to see their chemistry … how they sound together.” And jam they do. With each actor playing multiple instruments, viewers are in store for a concert featuring piano, banjo, drums, guitar, cello and everything in between. Carter said that playing in a band with his castmates with no conductor in the pit to guide them has been challenging, but has made this cast bond faster than any other he has worked with. “It forces you to listen in a way you don’t have to. You have to know how other people breathe,” he said. “We’re not looking at one another, but one person is giving the cue because you can hear them breathe. You learn the mechanics of another person.” “We made sure we cast people who played off of each other, but that we also featured their [individual] strengths,” Tancioco said. “Pump Boys and Dinettes” began its 16-month run on Broadway in 1982, with a stint on London’s West End following from 1984 to 1985. Jim Wann and Mark Hardwick, two of the show’s writers, based the musical on their time as entertainers in New York City’s Western-themed Cattleman Lounge. The musical has almost a 1950s variety show feel to it; rather than a show with a plot, it is more of a music revue, with the the pump boys and the waitresses alternating between performing songs and describing to the audience, sometimes self-deprecatingly, life on Highway 57 through comical anecdotes about their love lives and school days. The show wholeheartedly embraces this breakdown of the traditional audience-actors barrier; in the song “Tips,” Rhetta and Prudie actually come out into the crowd to see if they can collect any cash from generous theatre-goers. The effect is a relaxed atmosphere that makes it so the cast can impress the audience without intimidating them.

Save with rebates on PowerView™ Motorization, the intelligent shades that * Choose parties. Order yourmove shades now and be ready automatically to a schedule youfor set.*holiday among the most popular Hunter Douglas motorized window fashions, honeycomb, roller and Beautiful Hunter Douglas window fashions are essential toincluding an inviting home décor. sheers, shadings, and more. Ask So, for details What’s more,Roman savingsshades, are available right now on verticals a wide range of styles. shop today. today, order early and have your window fashions professionally installed. All in time for your guests to arrive.