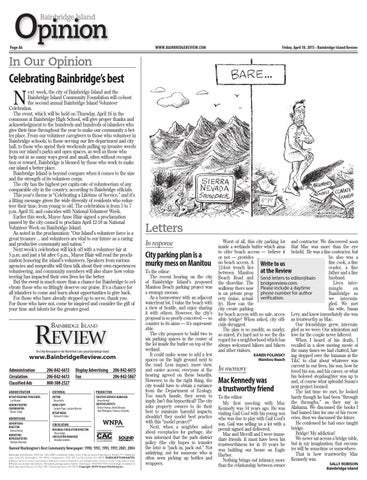 ext week, the city of Bainbridge Island and the Bainbridge Island Community Foundation will co-host the second annual Bainbridge Island Volunteer Celebration. The event, which will be held on Thursday, April 16 in the commons at Bainbridge High School, will give proper thanks and acknowledgment to the hundreds and hundreds of islanders who give their time throughout the year to make our community a better place. From our volunteer caregivers to those who volunteer in Bainbridge schools, to those serving our fire department and city hall, to those who spend their weekends pulling up invasive weeds from our island’s parks and open spaces, as well as those who help out in so many ways great and small, often without recognition or reward, Bainbridge is blessed by those who work to make our island a better place. Bainbridge Island is beyond compare when it comes to the size and the strength of its volunteer corps. The city has the highest per capita rate of volunteerism of any comparable city in the country, according to Bainbridge officials. This year’s theme is “Celebrating a Lifetime of Service,” and it’s a fitting message given the wide diversity of residents who volunteer their time, from young to old. The celebration is from 5 to 7 p.m. April 16, and coincides with National Volunteer Week. Earlier this week, Mayor Anne Blair signed a proclamation passed by the city council to proclaim April 12-18 as National Volunteer Week on Bainbridge Island. As noted in the proclamation: “Our Island’s volunteer force is a great treasure ... and volunteers are vital to our future as a caring and productive community and nation.” Next week’s celebration will kick off with a volunteer fair at 5 p.m. and just a bit after 6 p.m., Mayor Blair will read the proclamation honoring the island’s volunteers. Speakers from various agencies and nonprofits will then talk about their own experiences volunteering, and community members will also share how volunteering has impacted their own lives for the better. But the event is much more than a chance for Bainbridge to celebrate those who so fittingly deserve our praise. It’s a chance for all islanders to come and learn about opportunities to give back. For those who have already stepped up to serve, thank you. For those who have not, come be inspired and consider the gift of your time and talents for the greater good.

The Only Newspaper in the World that Cares about Bainbridge Island

City parking plan is a murky mess on Manitou To the editor: The recent hearing on the city of Bainbridge Island’s proposed Manitou Beach parking project was a swampy morass. As a homeowner with an adjacent waterfront lot, I value the beach with a view of Seattle, and enjoy sharing it with others. However, the city’s proposal is so poorly conceived — so counter to its aims — it’s unpresentable. The city proposes to build two to six parking spaces in the center of the lot inside the buffer on top of the wetland. It could make sense to add a few spaces on the high ground next to the road. Less impact, more view, and easier access; everyone at the hearing agreed on these benefits. However, to do the right thing, the city would have to obtain a variance from the Department of Ecology. Too much hassle, they seem to imply. Isn’t this hypocritical? The city asks property owners to do their best to minimize harmful impacts; shouldn’t they model best practice with this “model project?” Next, when a neighbor asked about receptacles for garbage, she was informed that the park district policy (the city hopes to transfer the lots) is “pack in, pack out.” Not satisfying, not for someone who is often seen picking up bottles and wrappers.

Worst of all, this city parking lot and contractor. We discovered soon inside a wetlands buffer which aims that Mac was more than the eye to offer beach access — believe it beheld. He was a fine contractor, but or not — provides he also was a no beach access. A Write to us fine cook, a fine 12-foot trench lies reader, a fine between Manitou at the Review father and a fine Beach Road and Send letters to editor@bain husband. the shoreline. The bridgereview.com. Lives interwalkway there now Please include a daytime mingle on is on private prop- phone number for author Bainbridge so erty (mine, actual- verification. we interminly). How can the gled. We met city create parking his wife, Susan for beach access with no safe, acces- Levy, and knew immediately she was sible bridge? When asked, city offi- as trustworthy as Mac. cials shrugged. Our friendships grew, interminThe plan is so muddy, so murky, gled as we were. Our admiration and so mired, it’s hard not to see the dis- love for the couple never faltered. regard for a neighborhood which has When I heard of his death, I always welcomed hikers and bikers recalled in a slow moving movie of and other visitors. the many times we had chatted, havKAREN POLINSKY ing stopped over the bananas at the Manitou Beach T&C to chat about whatever was current in our lives, his son, how he loved his son, and his career, or what his beloved stepdaughter was up to and, of course what splendid Susan’s next project loomed. The last time we met, he looked hardy though he had been “through To the editor: My first meeting with Mac the throughs,” as they say in Kennedy was 34 years ago. He was Alabama. We discussed the books I visiting Gail Cool with his young son had loaned him for one of his recovwho was due to play with Gail Cool’s eries, then we discussed the future. He confessed he had once taught son. Gail was selling us a lot with a bridge. permit signed and delivered. Bridge! My addiction! Mac and Merrill and I were immeWe never sat across a bridge table, diate friends. It must have been his trustworthiness for in 10 years he but in my imagination, that encounwas building our house on Eagle ter will be sometime or somewhere. That is how trustworthy Mac Harbor. Kennedy was. Nothing brings out intimacy more SALLY ROBISON than the relationship between owner

Mac Kennedy was a trustworthy friend