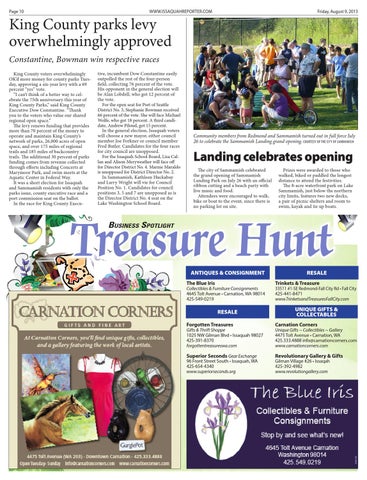 King County parks levy overwhelmingly approved Constantine, Bowman win respective races King County voters overwhelmingly OK’d more money for county parks Tuesday, approving a six-year levy with a 69 percent “yes” vote. “I can’t think of a better way to celebrate the 75th anniversary this year of King County Parks,” said King County Executive Dow Constantine. “Thank you to the voters who value our shared regional open space.” The levy renews funding that provides more than 70 percent of the money to operate and maintain King County’s network of parks, 26,000 acres of open space, and over 175 miles of regional trails and 185 miles of backcountry trails. The additional 30 percent of parks funding comes from revenue collected through efforts including Concerts at Marymoor Park, and swim meets at the Aquatic Center in Federal Way. It was a short election for Issaquah and Sammamish residents with only the parks issue, county executive race and a port commission seat on the ballot. In the race for King County Execu-

tive, incumbent Dow Constantine easily outpolled the rest of the four-person field, collecting 76 percent of the vote. His opponent in the general election will be Alan Lobdell, who got 12 percent of the vote. For the open seat for Port of Seattle District No. 3, Stephanie Bowman received 66 percent of the vote. She will face Michael Wolfe, who got 18 percent. A third candidate, Andrew Piloud, got 15 percent. In the general election, Issaquah voters will choose a new mayor, either council member Joe Forkner or council member Fred Butler. Candidates for the four races for city council are unopposed. For the Issaquah School Board, Lisa Callan and Alison Meryweather will face off for Director District No. 4. Marnie Maraldo is unopposed for District Director No. 2. In Sammamish, Kathleen Huckabay and Larry Wright will vie for Council Position No. 1. Candidates for council positions 3, 5 and 7 are unopposed as is the Director District No. 4 seat on the Lake Washington School Board.

Community members from Redmond and Sammamish turned out in full force July 26 to celebrate the Sammamish Landing grand opening. Courtesy of the city of sammamish

Landing celebrates opening The city of Sammamish celebrated the grand opening of Sammamish Landing Park on July 26 with an official ribbon cutting and a beach party with live music and food. Attendees were encouraged to walk, bike or boat to the event, since there is no parking lot on site.

Prizes were awarded to those who walked, biked or paddled the longest distance to attend the festivities. The 8-acre waterfront park on Lake Sammamish, just below the northern city limits, features two new docks, a pair of picnic shelters and room to swim, kayak and tie up boats.

Treasures just waiting to be discovered Sometimes short-lived and capricious, other times more enduring, fashions come and go with little mercy for consumers. But the same cannot be said of antiques, which have character and soul and only get nobler with the passage of time. Attracted by trendy fashions, many of us threw away the “old junk” inherited from family members. But as people get their fill of superficiality and begin to return to their roots, they would love to be able to recuperate Great-grandma’s solid wood kitchen table, an ancestor’s elegant chest of drawers, or a great-uncle’s precious gramophone.

During their summer vacations, many people are motivated to indulge such feelings of nostalgia with exploratory trips to antique shops, which are veritable treasure troves overflowing with history. Avid collectors might look for pedigreed finds, while amateurs and neophytes might easily fall in love with a simple vase, lamp, or desk that will give a unique cachet to their eclectic decor. Dusted, polished and restored, antiques can recover all their past glory. After all, artisans created these enduring pieces with loving care from any material at hand. As witnesses to another era, they have acquired the stature of works of art while still bearing their humble origins as everyday objects in another time. In a society where furniture and appliances are so quickly discarded, antiques are meant to be cherished through the generations. Happy hunting this summer!

Dusted, polished and restored, antiques can recapture all their past glory.