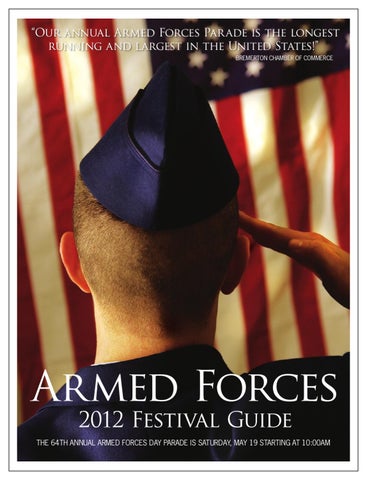 “Our annual Armed Forces Parade is the longest running and largest in the United States!” bremerton chamber of commerce

THE 64th ANNUAL ARMED FORCES DAY PARADE IS SATURDAY, MAY 19 STARTING AT 10:00AM

Bremerton celebrates its 64th annual Armed Forces Day with a parade, pancake breakfast, barbeque luncheon and a plethora of festive activities honoring our veterans, active duty and reserve forces. Fittingly, some enlisted members of our military are taking one final step toward full fledged patriotism. On Thursday, May 17, the U.S. Citizenship and Immigration Services held a naturalization ceremony aboard the USS Turner Joy (DD-951) as guests of the Naval League Service Office Northwest. At the ceremony, 37 active duty military members, including sailors, soldiers and airmen, became U.S. citizens. The ceremony, according to USCIS Public Affairs Officer Sharon Rummery, “Is especially meaningful as all of these non-

citizen military members have volunteered to place their lives on the line for a country not yet their own.” Thursday’s ceremony is the second time a naturalization ceremony honoring Armed Forces Day has occurred. “This is an event that started last year,” said JoAnn Groat, who handles event reservations for the USS Turner Joy. “We hold the event on the fantail of the ship. It’s good for them and it’s good for us.” Bremerton started the parade in 1948 to honor John “Bud” Hawk. Known as Bremerton’s hometown hero, Hawk entered the service in Bremerton and was awarded a Medal of Honor by President Harry Truman at the Washington State Capitol in Olympia. Hawk, who said Tuesday, “I’ve lived in Bremerton a long time. I’ve missed the last few parades because I’m old and not feeling well but I often think about it.” Hawk, who taught

5th and 6th grade in Bremerton beginning in 1952, started his teaching career at Tracyton Elementary. In addition to his Medal of Honor, Hawk is the recipient of four Purple Hearts and a Distinguished Conduct Medal from the United Kingdom. “Now I just sit on my rear end doing nothing,” he said with a chuckle. The first Armed Forces Day was celebrated nationally on May 20, 1950, one month before the Korean War began. The holiday was officially designated in 1949. Prior to that, each branch of the military had its own special day. The day was created by President Truman on August 31, 1949. The five branches of the armed forces had just been consolidated under the Department of Defense. The 64th annual Armed Forces Day parade in Bremerton will prove to be another memorable day. The event this year includes a military f lyover, 20 bands, two civilian drum lines and 160 parade entries. See PATRIOTISM, 3

for rating KPS among the top health plans in the country*

Amina Kocer-Bowman will serve as the Grand

father, John Bowman, is a Navy Veteran who served in Iraq. Bremerton’s Armed Forces Day celebration in 1950 had the slogan,

report to Captain C.O. Humphreys that there were seven speaking engagements and one parade. King estimated 14,000 people attended the parade, 800 people attended a military ball and 11,750 individuals visited the Bremerton shipyard and shops. The 1950 Bremerton Armed Forces Day schedule of events included a public judging of baked beans and cornbread contest (won by the U.S.

Naval barracks) at the shipyard cafeteria, formations of navy aircraft from Whidbey Island flying over Bremerton and a public military ball at the Bremerton Civic Center from 9 p.m. to midnight. While still maintaining the tradition of the parade, Bremerton has incorporated additional

A SPECIAL THANKS TO THOSE WHO SERVE All active duty and retired uniform service members from the Armed Forces (Army, Navy, Air Force, Marines, Coast Guard, National Guard), Law Enforcement, and Fire Departments are eligible.

Must present valid ID to participate. May not be combined with any other promotional offer.

Marshal. Kocer-Bowman, a Bremerton third grader, was shot and nearly died in a gun accident at a local school Feb. 22. Her

“Teamed for defense.” C.A. “Buzz” King, General Chairman of the Armed Forces Day event, wrote in a typed and mimeographed

Silverwood School Where Children are Challenged and Cherished

all appliances and more everyday

Saluting Our Armed Forces and Veterans

Thank you for serving our country with honor and distinction.

Thank You Armed Forces The brave men and woman of our Armed Forces serve selflessly to keep our families, community, and country free. We are grateful and appreciate the sacrifices that you and your families make to keep us safe and secure.

Free Heroes BBQ Allow us to show you our gratitude. All active duty, reserves, retirees, veterans and their families are invited to join us for a free BBQ! After the Armed Forces Day Parade we’ll be on Pacific Ave, between 4th Street and Burwell Street. See you there!

events, such as an annual golf tournament, a pancake breakfast and a free barbecue for active duty, reserve and veterans. “We start getting ready for the next year’s celebration as soon as the current one is concluded,” said Frank Gentile, the Bremerton Chamber of Commerce operations manager. “We start publicizing it January 1 every year.” Gentile estimates parade attendance to be between 25,0000 and 30,0000 people. “It’s two or three people deep along the entire parade route,” he said.

Today’s heroes David Lucero, 21, an E-3 who serves as an aviation support equipment technician on the USS Ronald Reagan, is one of the 37 who became naturalized on the Turner Joy this week. The annual parade and celebration of those serving the nation connects Bremerton’s newest citizens with Bud and the World War II generation that the parade began with. Lucero, who was born in the Philippines, enlisted in Carson, California, a year and a half ago. Lucero is currently stationed in Bremerton. “I’ve lived here my whole life. I mean, I was born in the Philippines, but I mostly consider myself a U.S. citizen. I finally started doing the paperwork once my mom

[Beth Lucero] forced me to,” Lucero laughs. “I’ve wanted to serve in the military for a long time. I really want to be able to vote - I mean, since the president is in charge of the military, I want to be able to choose who my boss is.” In the meantime, Lucero’s job as an equipment technician is crucial: “I keep the aircraft flying,” he said. Lucero initially wanted to join the Navy in the hopes he would one day become a Navy SEAL. “You have to be a U.S. citizen to be a SEAL,” Lucero said Tuesday. “But that’s okay and I still ran with it. I want to be able to travel the world. I want to be stationed in Japan someday.” When asked if Lucero was planning on participating in the Armed Forces Day parade, he replied, “I’m not sure. I start volunteering at the Bremerton YMCA Saturday. But it’s my first Armed Forces Day, so we’ll see.” Jesus Saldana, an infantry soldier who works as an assistant gunner with the Army, is originally from Peru. He too became a U.S. citizen on Thursday. “This country received me with open arms,” Saldana said. “It gave me an education, my beautiful wife, two beautiful daughters, and everything I ever dreamed of.” Saldana, stationed at Fort Lewis for the last 18 months, is heading to Afghanistan this fall for nine months. He said his father’s goal was to bring

each of his 13 children to the United States to eventually become citizens. “My dad came to the U.S. on a tourist visa when I was one day old. He got his residency. I didn’t see him again until I was eight years old and then again when I was 16.” Saldana was prompted to enlist in Jersey City, New Jersey. “I was watching the news one day about two years ago, CNN I think, and I heard a general in Afghanistan say he needed more people there. So I told my wife, ‘I’m going to enlist.’ I lost weight, made it through basic training. When I was in Peru, all I remember is not having money. Not having shoes. Nothing. Oppression. No opportunity. I think the U.S. is my country.” His drill sergeant in Fort Benning encouraged him to start the process to become a U.S. citizen. After becoming a naturalized U.S. citizen, Saldana planned on indulging in ice cream with his family and continue on with his day: “I don’t hear troops in Afghanistan taking the day or weekend off. Why should I be the exception? I go all day, from 4 a.m. until 11 p.m. It is my time to give back and thank this country for giving me everything I have.” Future plans include applying to become a drill sergeant. “I make plans, detailed plans. I want people to say, ‘Saldana is a great soldier.’”

2 DAYS ONLY! MAY 22ND & 23RD THE VICTORY FACTORY SEMI TRUCK WILL BE HERE

From one generation to another... We appreciate all you do!

“Dedicated to your Dental & Denture needs”

ENJOY BBQ ON BOTH DAYS!

*ON THE 23RD AT 6PM - JOIN OUR CLIFF’S CYCLE CENTER YOU’VE GOT OURRIDE! BACK AND

NOW WE’VE GOT YOURS!

FULL FULL THROTTLE THROTTLE YOU’VE GOT OUR BACK AND NOW WE’VE GOT YOURS!

(Next to Arby’s & Bank of America)

Get a Free Slice of Pie

Thanks to all of the brave men and women serving in our military!

Puget Sound Navy Museum Beginning with approximately 600 objects, the Museum’s collection now numbers more than 18,000. Building 50 provides the Museum with 7,909 square feet of exhibition space and 4,392 square feet of collections storage. Today, visitors can explore the naval history of the region and experience life as a sailor through exhibits about the Puget Sound Naval Shipyard, the USS John C. Stennis, and much more.

Free to the public Open Saturday 10 a.m. to 4 p.m. and Sunday 1 to 4 p.m. USS Turner Joy The USS Turner Joy (DD-951), famed Navy destroyer from the Vietnam War, is now maintained and administered by the Bremerton Historic Ships Association. The museum ship and memorial honors not only the men and women of our modern US Navy, but also recognizes the accomplishments of those who help build and maintain the

by Alexander McNair, and a “crazy quilt” by Margaret Kemp of Tracyton. Visit us to explore Arts and Crafts of Kitsap, from native and pioneer resourcefulness to the modern DIY movement.

Leave the ordinary behind. Go extraordinary. The Point Casino has non-stop excitement for you in May! TPC LOGO - 2012

TAKE ME OUT TO THE BALL GAME! Ball Game To The Take Me Out

Visit the-point-casino.com or the Wildcard Club for details.

the-point-casino.com 1.866.547.6468 Close to Home... Far From Ordinary.® The Point Casino is proudly owned and operated by The Port Gamble S’Klallam Tribe. Management reserves all rights to alter or cancel without prior notice. Must be at least 18 years old to participate in gaming activities and at least 21 years old to enter the lounge area. Knowing your limit is your best bet—get help at (800) 547-6133.

We Salute You! Thank you to all our military men and women serving at home and abroad