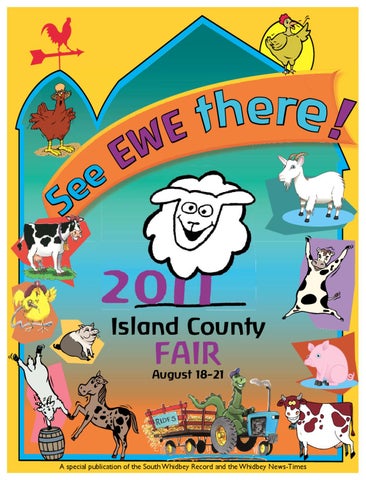 Here on Whidbey Island, where suburban and rural are only a ferry ride apart, we enjoy the best of both worlds. Nowhere is that more evident than during the third week in August, when the Island County Fairgrounds echoes a symphony of sounds. To the background noise of screams from carnival riders, add baas, moos, squawks and neighs. Entertainment and education await you everywhere, from the Thursday opening ceremony to the parade on Saturday morning, from the whine of the hotsaws at the log show Sunday afternoon to the beat of the lawnmowers racing in the arena once the 4-H Parade of Champions walks into history. Breathe in the smells of freshlybaked scones, lumpia made by hand, and barbecued pork smoked all night long. Let your eyes feast on gorgeous quilts dangling from rafters, colorful flowers and potted plants parked on

Now at the Lighthouse (next door to

Come see our new showroom in the lighthouse!

NO SMOKING EXCEPT IN DESIGNATED AREAS

Three areas on the fairgrounds and one in the campgrounds are indicated by #37 on the map. Smoking elsewhere is strictly prohibited.

The 4-H Western Games take place at 2:30 pm in the horse arena. Barrel racing is an exciting equestrian event to watch.

Sometimes you just have to hug a cute furry critter, and you’ll find plenty of them at the fair! continued on page 5

Saturday, Aug. 20 • 10am From Downtown Langley to the Fairgrounds Midway

Lance Kidder graduated as Coupevilleâ&#x20AC;&#x2122;s salutatorian in 2011 boasting the third highest grade point average in his senior class. He is an Eagle Scout and was an active member in academic clubs like Hi-Q and the National Honor Society during his high school years. This year, Kidder was the project manager of the Admiralty Head Lighthouse rebuild, a project that encompasses all three island high schools and aims to restore the lantern house to its original glory. But despite his many accomplishments, Kidder is hesitant to accept praise. After reflecting on his many successes, Kidder simply states that he is thankful to have had such incredible teachers throughout his education â&#x20AC;&#x201D; many of whom were raised in a barn, weigh about half a ton, are covered in coarse hair and sport slimy round noses. Kidder entered Island County 4-H as a fourth-grader and was named 4-Hâ&#x20AC;&#x2122;er of the Year for 2011. He said he wanted to represent the organization because the lessons heâ&#x20AC;&#x2122;s learned from working with cattle have been invaluable, and he was eager to give back to the group. â&#x20AC;&#x153;I really like how much you can learn in 4-H that you canâ&#x20AC;&#x2122;t learn in school,â&#x20AC;? Kidder said. â&#x20AC;&#x153;I learned how to be self-sufficient and how to do things with animals. You learn about where your food comes from and work ethic.â&#x20AC;? Kidder grew up in Coupeville and said his family has always raised a few cattle every year for meat. He joined

while watching him grow up in the 4-H program is that he has become a very well-rounded individual, treats everyone with respect and has a great sense of humor. Always available to help whenever called upon, Lance continually demonstrates excellent leadership skills, as well as giving 100 percent to his 4-H projects and community service. We are thrilled to have Lance as our role model for our 4-H program here in Island County, she said.â&#x20AC;?

Thrill rides for all ages await you at this year’s Island County Fair.

Prizewinning produce will be on display in the Warren Burrier building at the fair.

“Everyone loves a parade,” and every year the fair hosts a cavalcade through downtown Langley that begins at 10am on Saturday, Aug. 20.

With an infectious passion for live performance, Chambers’ exceptionally trained voice shifts through a wide musical spectrum with ease. Her sound is both fierce and angelic, endearing her to audiences of all age groups and genres. Chambers’ lyrics are often poignant and wise harkening back to Joni Mitchell. Musically there are elements of Elton John, with a touch of James Taylor’s down-home, relaxed quality. Her music reflects the stories of those who have reached for love, dreamed big or sought a life of self-examination. There are moments of pain and disappointment expressed in her songs, but more predominantly there is love, determination and optimism throughout. Her songs are like chapters of a book: connected thematically, creating a beautiful, touching journey for her listeners.

Elvis Presley’s voice, soul and presence would always cut through the deepest of scratched RCA records. This is what Danny Vernon discovered at an early age when he began singing along with his father’s discarded albums, unaware of Presley’s vast impact on American culture. With a devout passion, Vernon would sing and dance along with the King’s music, and, eventually, that devotion paid off and became his “Illusion of Elvis” show. He enjoys performing all three decades of Elvis’ career, including the recklessly abandoned hillbilly cat of the ‘50s, the sleek ‘60s movie star years, including the “Comeback Special,” and the sexy guy of the ‘70s jumpsuit years. With the voice, look and passion of the 20th century icon, Vernon strives to re-capture Elvis Presley’s appeal to an audience of any age

Bahia Rowan was raised in rural Western Washington in a home infused with music. Rowan writes simple, poignant tunes that reflect the sounds that surrounded her in her youth. Among the many instruments played by her family was her father’s classical guitar, which explored not only etudes, but folk, blues and rock ‘n’ roll, and had a strong influence on the budding musician’s daughter. Rowan grew accustomed to the warm rich tones of nylon strings rather than the twang of steel, and gives that richness back to her audiences with her guitar and voice.

See above prices as appropriate The Island County Fair has an all-paid gate. Entrants are required to either wear a wristband which allows admission for the duration of the fair, or present a ticket at the gate before entering.

Comedian Matt Baker performs a young, hip style of stand up comedy that makes people roar with laughter from Prince George to Puerto Rico. He has performed shows in all 50 states, was featured at the Las Vegas Comedy Festival and has been seen on numerous television shows, including “Last Comic Standing” and “America’s Got Talent.” Baker’s comedy ranges from stories about being raised in a quirky family to the 10 best ways to break up with someone without getting physically hurt. No matter the age or background of his audience, Baker unifies them in laughter. He’s got a likeability and an off-thecuff humor that connects him with his audience. He’s sharp, edgy and hilarious without being inappropriate.

After All The Rides, The Games, And The Hot Chili Dogs, Youâ&#x20AC;&#x2122;re Probably Going To Need Something.

Wallet refills are available at any of our branches or ATMs.