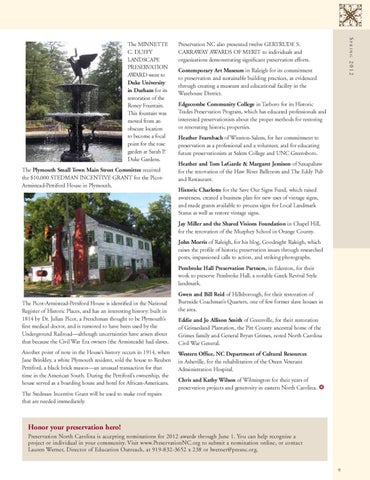 The MINNETTE C. DUFFY LANDSCAPE PRESERVATION AWARD went to Duke University in Durham for its restoration of the Roney Fountain. This fountain was moved from an obscure location to become a focal point for the rose garden at Sarah P. Duke Gardens.

Preservation NC also presented twelve GERTRUDE S. CARRAWAY AWARDS OF MERIT to individuals and organizations demonstrating signiﬁcant preservation efforts. Contemporary Art Museum in Raleigh for its commitment to preservation and sustainable building practices, as evidenced through creating a museum and educational facility in the Warehouse District. Edgecombe Community College in Tarboro for its Historic Trades Preservation Program, which has educated professionals and interested preservationists about the proper methods for restoring or renovating historic properties. Heather Fearnbach of Winston-Salem, for her commitment to preservation as a professional and a volunteer, and for educating future preservationists at Salem College and UNC Greensboro. Heather and Tom LaGarde &amp; Margaret Jemison of Saxapahaw for the renovation of the Haw River Ballroom and The Eddy Pub and Restaurant. Historic Charlotte for the Save Our Signs Fund, which raised awareness, created a business plan for new uses of vintage signs, and made grants available to process signs for Local Landmark Status as well as restore vintage signs. Jay Miller and the Shared Visions Foundation in Chapel Hill, for the renovation of the Murphey School in Orange County. John Morris of Raleigh, for his blog, Goodnight Raleigh, which raises the proﬁle of historic preservation issues through researched posts, impassioned calls to action, and striking photographs. Pembroke Hall Preservation Partners, in Edenton, for their work to preserve Pembroke Hall, a notable Greek Revival Style landmark.

The Picot-Armistead-Pettiford House is identiﬁed in the National Register of Historic Places, and has an interesting history: built in 1814 by Dr. Julian Picot, a Frenchman thought to be Plymouth’s ﬁrst medical doctor, and is rumored to have been used by the Underground Railroad—although uncertainties have arisen about that because the Civil War Era owners (the Armisteads) had slaves. Another point of note in the House’s history occurs in 1914, when Jane Brinkley, a white Plymouth resident, sold the house to Reuben Pettiford, a black brick mason—an unusual transaction for that time in the American South. During the Pettiford’s ownership, the house served as a boarding house and hotel for African-Americans.

Gwen and Bill Reid of Hillsborough, for their restoration of Burnside Coachman’s Quarters, one of few former slave houses in the area. Eddie and Jo Allison Smith of Greenville, for their restoration of Grimesland Plantation, the Pitt County ancestral home of the Grimes family and General Bryan Grimes, noted North Carolina Civil War General. Western Ofﬁce, NC Department of Cultural Resources in Asheville, for the rehabilitation of the Oteen Veterans Administration Hospital. Chris and Kathy Wilson of Wilmington for their years of preservation projects and generosity in eastern North Carolina.

The Stedman Incentive Grant will be used to make roof repairs that are needed immediately.

Honor your preservation hero! Preservation North Carolina is accepting nominations for 2012 awards through June 1. You can help recognize a project or individual in your community. Visit www.PreservationNC.org to submit a nomination online, or contact Lauren Werner, Director of Education Outreach, at 919-832-3652 x 238 or lwerner@presnc.org. 9 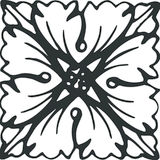