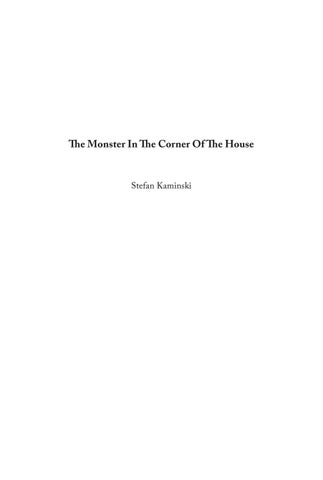 The Monster In The Corner Of The House Stefan Kaminski

And Kindness Lay All About

Stories from the Christchurch Earthquakes

I came to New Zealand in the early sixties when I was about twelve and have lived in Christchurch ever since. I knocked around in a few miscellaneous… what… you wouldn’t call them careers, more

like jobs. Got a science degree and then went commercial fishing and a few other such things for a while. Finally, there was another

degree in law and that’s what I’ve done since, a lot of years now. Civil litigation. An enjoyable career when you are winning, not so enjoyable when you lose.

monster in the corner of the house. We wandered outside thinking it must have been dreadful up in the main divide and pleased that not

much had happened. Then I walked around to the front of the house and stubbed my toe on some bricks. One of our chimneys had come

down and was lying there against the neighbours’ fence. It wasn’t a big issue. The next morning the neighbours helped us clean up most

of it and I put one of those plasticised things over what was left of our chimney.

Boxing Day I was in the fishpond cleaning it out. I was hit in the

nether regions by a lot of cold water and the large chimney—the one that hadn’t yet come down—did a sort of pirouette. We needed a bit

of help to bring it down but again things didn’t seem all that terrible.

In February I was on level eighteen of the PriceWaterhouseCoopers

building and that did sway around a bit. I had an office on the corner

that gave me a great view across Victoria Square and into Cathedral Square itself. From there I could see people running around and the clouds of dust rising. I was taking photographs with my mobile phone when I was called to help free one of my colleagues from some

furniture that had pinned him to his desk. Then the aftershocks

started to arrive and we decided we should probably vacate the building. Going down the stairwell someone yelled out, ‘Hold onto

excessive. Only afterwards did I realise the wisdom of that advice. I presume it came via an engineer from one of the firms down

below, someone who probably twigged there was a chance the stairs

could go. Anyway, while I was heading down my mobile went off, it was a one-word text from my wife, Anne. It said, Help. A trifle

disconcerting and not particularly helpful. Naturally I tried to phone and then text her back but to no avail.

all around. From where I was I could see across the river to the Pyne

Gould building that had come down. My car was in the basement

of PriceWaterhouseCoopers which by then was rapidly filling with

water and there were some large cracks that meant there was no way it was going to be coming out any time soon. There was no choice

except to begin walking through the liquefaction and gridlocked

traffic. At various intersections people had voluntarily taken it upon

themselves to stand in the middle of the intersection and direct the traffic. Without them it would have been far worse.

corner with a young fellow I’d met on the way, I noticed we couldn’t

see the roof of my home, there was no sign of it. That was a little disturbing. He walked on with me and as we approached we could see

the house had nose-dived onto the front lawn. I yelled out and one of our neighbours said that if I was looking for Anne she was on the back lawn having a smoke. After she’d had one or two more we sat on

the garden bench by the conservatory and watched the liquefaction

bubbling up around us. In a way it was strangely exhilarating. I mean when things get to that point it makes life easy doesn’t it—there’s not

a hell of a lot you can do about it, except sit and wait. We were lucky to have neighbours that were very kind. They took us in and looked after us over that initial period.

friend of mine. He happened to be down from Auckland and staying

in a hotel by the Avon. The hotel had been wrecked and he thought he

would come and stay with us. Sadly, there wasn’t much chance of that.

Poor fellow arrived trailing his suitcase only to find he was out of luck. Four or five kilometres on he managed to find some other friends who had room.

As for us, we, along with our neighbours Shane and Sharon, spent

many lovely nights sitting around the barbeque while our deep freezers

impulsively at the supermarket and never get around to eating. The

prunes and the quail—did we eat quail? Yes, we had quail, and with

all the street lights out we got to gaze up at the beautiful starry skies as well.

of aggravated that. Christmas; that one I was sitting in a space down

Riccarton Road that had most recently been a mechanics garage. Some

enterprising young guys had scattered some lounge furniture around

and turned it into a bar. It was rather electrifying when it first went off. The two big metal roller doors made a hell of noise but that was all there

was to it. No problem there. No, February, that was undoubtedly the

worst. Anne was a bit bloodied and bruised in that one, but basically, we’ve both been okay.

Since that time, since February, I’ve worked from home. But while

it’s all very well sitting at a computer yourself and doing things online, it’s not quite the same is it. There are advantages, but also some distinct disadvantages, most of which relate to not feeling like I’ve got

my finger on the pulse. The collegiality is missing. Just bumping into someone in the lift and they mention a case or something else clicks

into place, I’m missing that sort of currency. It’s particularly acute I think for litigators, they need to stay in touch with each other. The

phone or a letter isn’t always an adequate substitute. So yes, probably

at some stage I’ll gravitate back towards town and join up in chambers again.

The situation we have here now is not something anyone would

has been pretty good. I know things have appeared slow on many

fronts but when you think of what has been available to most of those affected, as opposed to what their legal entitlement was, they don’t

really have grounds for complaint do they. People tend to forget that the money’s got to come from someone and I think the rest of the

come from someone and right now that someone tends to be outside Canterbury don’t they. I think in some respects we have been a bit

too self-absorbed and probably strained the patience of some wellmeaning people outside the region.

Like many we had been very comfortable in our home over the years,

perhaps we’d even got into a bit of a rut without fully appreciating it. When you think about it overall, this whole thing might not have been

too bad for us. Sure, there’ll be a year or two of uncertainty in it, but ultimately, as much as it shook the house down, it probably shook us

out as well. Maybe prompted us to take another look at how we live our lives. Not always such a bad thing. The Monster In The Corner Of The House – Stefan Kaminski

And Kindness Lay All About. Stories from the Christchurch Earthquakes.

The Monster In The Corner Of The House – Stefan Kaminski

And Kindness Lay All About. Stories from the Christchurch Earthquakes.