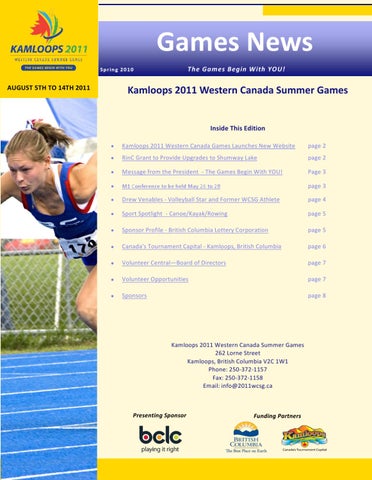 Games News The Games Begin With YOU!

Message from the President - The Games Begin With YOU!

It has become easier to access information for the Kamloops 2011 Western Canada Summer Games as the Games Society launched its new website at www.2011wcsg.ca. The site will be a source of information for news, upcoming special events, volunteer opportunities, registration and more! The site was designed to provide an attractive, easy to maneuver source for Games information. It is conveniently laid out with the needs of participants, volunteers, visitors, media and sponsors in mind. Once volunteer recruitment begins in 2011, volunteers will be able to register online through the website and as Games time draws closer athletes, coaches, officials, VIPs and others attending will also be able to register for accreditation online through ViewTeam technology. ViewTeam is a complete software solution for managing the event needs of volunteers, athletes, participants, VIPS, media, contractors and all other parties required to be registered for an event. It has been developed especially for international sporting events and has been used on over 50 events throughout North America. The program along with the host server will become one of the many legacies left by the 2011 Games as it will be gifted to the City of Kamloops for future Tournament Capital events.

RinC Grant to Provide Upgrades to Shumway Lake In preparation for the Kamloops 2011 WCSG, a three-way partnership will see the federal government, the Kamloops Canoe and Kayak Club, the Kamloops Rowing Club and the Western Canada Sum mer Games Society contribute a total of Jeff Morgan, - Kamloops Rowing , Henry Pejril, President 2011 WCSG &amp; MP more than $100,000 to Cathy McLeod at the announcement of the RinC Grant for Sumway Lake improve the Shumway Lake course for the 2011 Games. $37,528 was provided under the Recreational Infrastructure Canada (RInC) program, a major job-creating, investment from Canadaâ&amp;#x20AC;&amp;#x2122;s Economic Action Plan.

our tagline mean? It’s an obvious play on the familiar “Let The Games Begin!”, and it is our hope that during these Games people will take the time to appreciate the effort and commitment of the individuals that make up such a great event. The Games begin with the Western Canada Games Council – a volunteer board that works tirelessly to maintain the quality, integrity and longevity of the Western Canada Games. The Games begin with a Host Municipality whose politicians and administrators have the foresight to recognize the many benefits an event such as this brings and then provide unparalleled support and facilities to ensure the event’s success.

The Games begin with a university that opens its doors to create one of the best Athlete’s Villages ever. The Games begin with a host society that has worked hard for the past year and a half and whose ranks of chairs and managers is swelling to over 100 as we move into the operational phases of our planning. The Games begin with a dedicated staff of 4 whose ranks will triple as the Games approach. The Games begin with the thousands of volunteers that generously give of their time. Volunteers are the engine that drive any large event and are the single largest contributor to an event’s success. The Games begin with the Athlete’s parents, coaches and managers who recognize the talents in these competitors and nurture, challenge and support them to help them achieve their potential. And finally the Games begin with the Athletes themselves. These driven young men and women put in countless hours training in their individual sports as they try to reach their goals. The Athletes that reach these Games have all had to go through qualification processes and are on high performance paths. These are the Athletes that are the pool from which we may see our next World Champion or Olympian. The Western Canada Games are created to give these wonderful young people an experience that will prepare them for future Games of higher levels. We are proud to be contributing to such an important part of their development. So when the Games are finally happening and whether you are a competitor, organizer, official, marshal, performer, spectator – whatever role you play – enjoy the competition and camaraderie. Focus on your task at hand but also please take the time to consider what everyone around you brings to the Games. Reflect on what it takes to stage such an event and the value you yourself bring. These Games begin with all of us!

Drew Venables is the perfect example of the spirit of sport competition and embodies the Kamloops 2011 Western Canada Summer Games’ motto “The Games begin with YOU!” This soft-spoken, impressive, young man has a quiet, charm that instantly puts you at ease despite his 6’7” stature. He comes across as confident, capable and driven. It is therefore understandable that he is a natural leader and has aspirations to coach volleyball in his future.

Born and raised in Kamloops, Drew quickly rose to the top of High School Volleyball competition and was named Athlete of the Year during grade 11 and 12, while maintaining his standing on the Honour Roll. He attributes his love of sport and desire to compete in volleyball to his two older brothers who influenced him and challenged his skill, as well as his parents who are also avid athletes. At sixteen Drew competed at the 2003 Western Canada Summer Games held in Selkirk, Manitoba. This was his first introduction to multi-sport competition at a high caliber level. He and his teammates were quite comfortable with their status as top athletes in their hometown of Kamloops, but here they were one of hundreds of others who excelled in their sport; it was an inspiring experience. Two years later Drew followed the natural course and competed at the 2005 Canada Games in Regina Saskatchewan. He notes that the Canada Games were even bigger and athletes got a taste of what it feels like to compete in an event like the Olympics. The press coverage associated with this level of competition was something that really impressed Drew and his teammates and reinforced the realization of the level they were competing at. When talking about his experience at the Western Canada Games and Canada Games Drew recalls, “Competing at this level you learn how to be an athlete. You realize what it takes to be successful in your sport. You learn all about nutrition, exercise and the level of physical and mental dedication it takes to be a professional athlete.” Drew recently graduated from the University of Manitoba on a scholarship where he completed a four year Bachelor of Arts Degree. During his time in University he played Setter for the University of Manitoba Bisons where once again he excelled and received many awards. An inspiration to young athletes from all sports, Drew has a passion for team sports and clear ideas of how being involved can influence a person’s life. Coaching appeals to him because he is a strong leader and sees where he can be a positive influence in bringing a professional level of competitive spirit to young athletes without the high stress and pressure that is sometime associated with competitive sports. His own story is strong support for the importance of and the opportunities that Western Canada Games provide for our country’s aspiring athletes.

Drew’s future plans include coaching Men’s Volleyball in Kamloops along with Pat Hennelly, the men’s coach at TRU. Drew will very likely be coaching Team BC’s men’s volleyball team for the Kamloops 2011 Western Canada Summer Games, meaning he will have come full circle.

Sport Spotlight Canoe/Kayak/ Rowing Canoe/Kayak and Rowing events for the 2011 WCSG will take place at Shumway Lake, home to the Kamloops Canoe and Kayak Club. The facilities at Shumway Lake were developed in conjunction with the 1993 Canada Games, hosted in Kamloops. These adrenalin charged events include both male and female competitors and range from singles to teams of two and up to eight. Race distances include 6,000 m, 1,000 m, 500 m and 200 m races. War Canoe teams consist of 14 members.

Kamloops hosts hundreds of tournaments, holds numerous cultural events, and welcomes thousands of participants and spectators to the city each year. Kamloops is synonymous with first-class events, a knowledgeable and enthusiastic volunteer base, and an outstanding variety of venues. Most recently, Kamloops hosted the 2010 World Masters Indoor Championships, (March 1–6, 2010) the first time this event was held in North America. Nearly 1400 athletes from 61 countries came to Kamloops to compete and the city received many accolades from athletes regarding the first-class facilities, enthusiastic and friendly volunteers, and the hospitality extended by the citizens of Kamloops. Kamloops is set to host the 2010 Canadian Gymnastic Championships May 24 – 30, 2010 at the Tournament Capital Centre and will soon be adding another gemstone to its crown, the Western Canada Summer Games. The City of Kamloops will host the Western Canada Summer Games August 5 – 14, 2011 and welcomes all athletes, their families and friends to visit, let loose and just play. For the latest information on events happening in Kamloops please visit the Tourism Kamloops Events Calendar: www.tourismkamloops.com/events_showEvents.html Kamloops and the Thompson River

Volunteer Central Volunteers are key to the success of the Games. Without them the Games could not possibly happen. The 2011WCSG will require between 2,000 and 3,000 volunteers working in every aspect of the Games.

Major recruitment for the Games will take place in 2011 but in the meantime a much smaller group of volunteers has been and will continue planning and coordinating. At the core, is the volunteer Board of Directors comprised of eighteen experienced, dedicated, volunteers.

The Games Begin With YOU! “A sincere Thank You to all of the Games Sponsors for their generous contributions towards making this event possible”

SILVER Find us on the Web www.2011wcsg.ca BRONZE 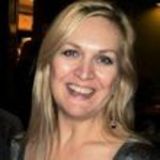