INTRODUCTION We have been exhibiting works by the American abstract expressionist artist Paul Jenkins (1923-2012) for many years now and having created a beautiful selection of works for sale, we would like to share these paintings with you. Jenkins was a multi-media artist, poet, and playwright. He often titled his works Phenomena, meaning something that can exist and be observed happening. His way of painting was a meditative process, pouring delicately intense colours of paint, creating layers which have a translucency both in his oil paintings, acrylics and watercolours. By using an ivory knife, he controlled the direction of the paint. He used to prime his canvases before pouring the paint, allowing the paint to remain on the surface and not soak into the canvas. Paul Jenkins studied at the Kansas City Art Institute and the Art Students League in New York City. He also spent four years studying with Japanese American artist Yasuo Kuniyoshi in New York City. Amongst his closest colleagues in his earliest days were Mark Rothko, Jackson Pollock, and Barnett Newman, and later on he shared a studio in Paris with Sam Francis. Jenkins had a fascination for spirituality and mysticism. For him, painting was a spiritual meditation on the nature of chance, balance, synchronicity, change and transformation. His first solo exhibitions were held at Studio Paul Facchetti in Paris in 1954 and the Martha Graham Gallery in New York City in 1956, and late in the 50s both the Whitney Museum and Peggy Guggenheim purchased works by him for their collections. Over the years, Jenkins had countless solo and group exhibitions in museums and galleries around the world including France, Germany, Belgium and the United Kingdom. He widely exhibited across the United States, and he also enjoyed great international exposure in Japan, South Korea, amongst others.

Please note all the works are available for sale and can be viewed on our website www.pissarro.art For any enquiries, email us at stern@pissarro.com

Paul Jenkins in front of one of his large-scale paintings (credits: Philippe Huguen/ Agence France-Press) 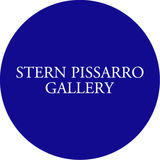