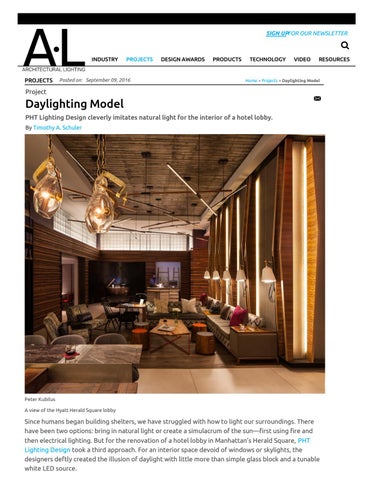 Daylighting Model PHT Lighting Design cleverly imitates natural light for the interior of a hotel lobby. By Timothy A. Schuler

Peter Kubilus A view of the Hyatt Herald Square lobby

Since humans began building shelters, we have struggled with how to light our surroundings. There have been two options: bring in natural light or create a simulacrum of the sun—ﬁrst using ﬁre and then electrical lighting. But for the renovation of a hotel lobby in Manhattan’s Herald Square, PHT Lighting Design took a third approach. For an interior space devoid of windows or skylights, the designers deftly created the illusion of daylight with little more than simple glass block and a tunable white LED source.

The space in question, the reception desk and lounge area of the Hyatt Herald Square, at West 31st Street, (it had a soft opening in September 2014 and its grand opening in March 2015) which had been severed from the daylight-ﬁlled entrance by an 18-foot-wide elevator core that occupied the middle of the lobby’s 32-foot-wide ﬂoor plate. Darkening it further were 10-foot ceilings at the entrance and two enclosed staircases on either side. From the moment she saw the space, Peiheng Tsai, who founded PHT Lighting Design in 2006, knew that lighting would play a leading role in stitching the two halves of the lobby back together. Working alongside the client and the interior designers, Paul Vega and Vennie Lau of New Jersey–based VLDG, Tsai conceptualized a custom clerestory light box that would wrap around the perimeter of the lounge and give hotel guests the impression that the space was illuminated by way of natural light. “The whole idea was to, somehow, create the illusion that there are windows,” says Tsai. “It was a very dark space in the back.” Using glass block would also tie into the interior design, which sought to elicit the area’s industrial history, a hub of both publishing (the neighborhood is named for the now-defunct New York Herald) and apparel and fashion.

Built out of 4-inch-thick industrial glass block and uplit with dynamic white LEDs, the clerestory system, which is replicated behind the bar, is a convincing imitation, glowing with a cool ambient light that visitors no doubt subconsciously assume is somehow penetrating the 20-story building. Controlled by a dimming system, the LEDs transition from a cool 5000K during the day to a neutral 3500K around dusk and then to a warm 2700K at night. Thanks to an astronomical clock, the lighting also is synced to the seasonal changes in the times of sunrise and sunset.

Tsai had never designed a lighting solution quite like this before, nor had she used tunable white LEDs, which were still fairly new when the project commenced. “We knew it was probably going to work, but we had no idea what it was going to look like,” she says. Tsai and her team created a full-scale mock-up at their oﬃce just a few blocks away from the hotel in neighboring Chelsea. They tested several light sources and settled on a dynamic white 50W 4-inch-wide LED wall grazing ﬁxture controlled with a DMX interface. Although the selected LEDs have a color temperature range of 2700K to 6500K, Tsai programmed it to max out at 5000K. She knew that 6500K would be too cool for a hospitality setting. “When that clerestory gets too cool it actually feels very odd,” she says, in part because the rest of the lobby’s lighting is closer to 3000K.

Throughout the space, lighting enhances the warm, midcentury vibe envisioned by the interior designers. The elevator core is wrapped in shimmering gold fabric wallcovering and enlivened by vertical laminated wood ﬁns. Concealed behind the wood is 2700K LED tape, which reﬂects off the shimmering surface and makes the wall itself seem luminous. “This whole wall feels like it’s glowing,” Tsai says. Elsewhere, subtle decorative pendants illuminate intimate reading areas (where guests can peruse vintage newspapers), while a collection of criss-crossing wooden pendants evoke the feel of a warehouse loft and enhance the height of the ceilings (which step up from 10 feet at the entrance to more than 14 feet in the lounge). For a collection of stylized wooden clocks along the back corridor wall and set to the times of major fashion capitals (New York, Paris, London, and Milan), Tsai used narrow LED MR16 spotlights to create a theatrical effect.

But the most challenging aspect of the project, Tsai says, was the clerestory “daylight” system. Her team hadn’t worked with tunable white LED sources previously, and just days before the hotel was to open, it wasn’t working. “Nobody knew why,” she says. Finally, Tsai, the electrical contractor, and representatives from the manufacturers met on site to diagnose the problem. They discovered the lighting system hadn’t been wired correctly. It took two or three hours to get it right—“It was very confusing,” Tsai says—but on opening day, when guests walked into the newly renovated Hyatt Herald Square, they found a space no longer divided into such discrete halves, with natural light from outside ﬂooding the espresso bar near the entrance—and seeming to do the same from the a set of “windows” in the back. •

Peter Kubilus Dining area off of the lobby 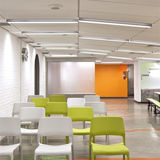