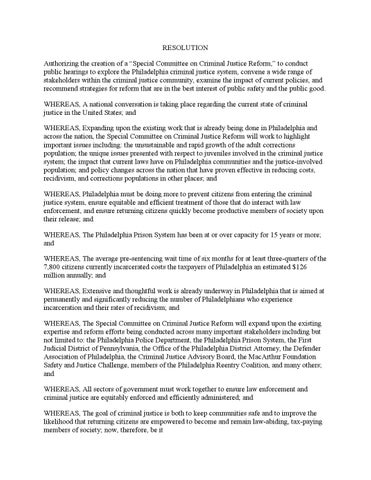 RESOLUTION Authorizing the creation of a â&#x20AC;&#x153;Special Committee on Criminal Justice Reform,â&#x20AC;? to conduct public hearings to explore the Philadelphia criminal justice system, convene a wide range of stakeholders within the criminal justice community, examine the impact of current policies, and recommend strategies for reform that are in the best interest of public safety and the public good. WHEREAS, A national conversation is taking place regarding the current state of criminal justice in the United States; and WHEREAS, Expanding upon the existing work that is already being done in Philadelphia and across the nation, the Special Committee on Criminal Justice Reform will work to highlight important issues including: the unsustainable and rapid growth of the adult corrections population; the unique issues presented with respect to juveniles involved in the criminal justice system; the impact that current laws have on Philadelphia communities and the justice-involved population; and policy changes across the nation that have proven effective in reducing costs, recidivism, and corrections populations in other places; and WHEREAS, Philadelphia must be doing more to prevent citizens from entering the criminal justice system, ensure equitable and efficient treatment of those that do interact with law enforcement, and ensure returning citizens quickly become productive members of society upon their release; and WHEREAS, The Philadelphia Prison System has been at or over capacity for 15 years or more; and WHEREAS, The average pre-sentencing wait time of six months for at least three-quarters of the 7,800 citizens currently incarcerated costs the taxpayers of Philadelphia an estimated $126 million annually; and WHEREAS, Extensive and thoughtful work is already underway in Philadelphia that is aimed at permanently and significantly reducing the number of Philadelphians who experience incarceration and their rates of recidivism; and WHEREAS, The Special Committee on Criminal Justice Reform will expand upon the existing expertise and reform efforts being conducted across many important stakeholders including but not limited to: the Philadelphia Police Department, the Philadelphia Prison System, the First Judicial District of Pennsylvania, the Office of the Philadelphia District Attorney, the Defender Association of Philadelphia, the Criminal Justice Advisory Board, the MacArthur Foundation Safety and Justice Challenge, members of the Philadelphia Reentry Coalition, and many others; and WHEREAS, All sectors of government must work together to ensure law enforcement and criminal justice are equitably enforced and efficiently administered; and WHEREAS, The goal of criminal justice is both to keep communities safe and to improve the likelihood that returning citizens are empowered to become and remain law-abiding, tax-paying members of society; now, therefore, be it 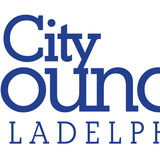