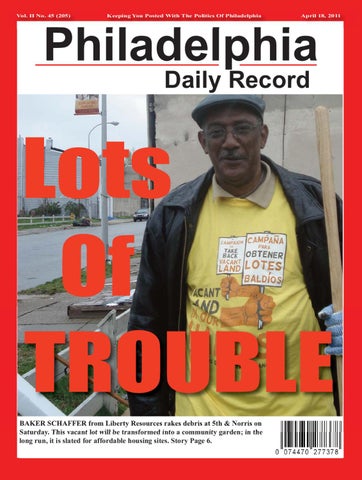 Keeping You Posted With The Politics Of Philadelphia

Lots Of TROUBLE BAKER SCHAFFER from Liberty Resources rakes debris at 5th &amp; Norris on Saturday. This vacant lot will be transformed into a community garden; in the long run, it is slated for affordable housing sites. Story Page 6.

Casey: Obama Should Rectify WTO Ruling, Get Tough On China US Sen. Bob Casey (D-Pa.), Chairman of the Joint Economic Committee, joined a bipartisan group of Senators in sending a letter to United States Trade Representative Ambassador Ron Kirk urging the Obama Administration to “take all steps necessary” to rectify a recent World Trade Organization ruling that would jeopardize the United States’ ability to carry out anti-dumping and countervailing duty investigations against China.

penalties against unfair Chinese trade practices. The US position was upheld in a host of related practices, but a recent Appellate decision reversed this. “We agree with you this decision ‘appears to be a clear case of overreaching by the Appellate Body’,” wrote the Senators to Ambassador Kirk.

Two Game-Changing Bills Signed By Mayor Mayor Michael Nutter began the week by signing into Councilwoman Donna Reed Miller’s (D) historic legislaw two measures which will improve protections for lation “Ban the Box” was passed with a 13-4 vote. It parkland as well as for ex-offenders. was signed into law this morning. The Mayor signed Bill 110002, which establishes a review process of all requests for City-owned land parkland to be transferred for a non park-recreation use. This ordinance, which amends Chapter 15-100 of the Philadelphia Code, will ensure a thoughtful review of any proposed conveyance or transfer of park land.

While this unprecedented legislation had caused some uncertainty and fear, particularly by business owners, Miller stood firm in her conviction to stop discrimination against people with criminal records during the initial application process and the first interview.

Ban The Box prohibits potential employers from inIn addition, the new ordinance requires the City’s Com- quiring either on the application or at the first interview, mission on Parks &amp; Recreation to conduct an alterna- if the job applicant has ever been arrested or convicted tive analysis identifying substitute park land that would of a criminal offense. After the first interview, the poreplace the transferred land, should the transfer request tential employer is then permitted to take any legal acbe approved. tion available to them. In July 2009, Nutter asked the newly formed Commis- This legislation does not require the hiring of individsion on Parks &amp; Recreation to submit proposed legisla- uals with criminal records nor making a decision withtion that would improve protections for City-owned out all of the relevant facts. park land. Council Blondell Reynolds-Brown (D) and Councilman Brian O’Neill (R) introduced Bill 110002 to City Council, which passed it with a 17-0 vote. Reynolds-Brown said, “I was proud to lead the charge in City Council to make its vision a reality.” Nancy Goldenberg, Chairman of the Commission on Parks &amp; Recreation said, “This is a significant accomplishment not only for the Commission but for the citizens of Philadelphia. We now have a consistent and transparent process to foster the protection of our parks and recreational land.”

CANDIDATES • POLITICIANS News You Can Use! Boost Your Popularity, Win On Election Day! Tell Your Constituents To Read About All the Work You Do For Them On the

Philadelphiadailyrecord.com Email them a copy of this Publication!

Said Focht, “Getting the most out of resources by leveraging partnerships has been the most effective way to reach public/private goals.” according to Focht. “Cleaning and greening our city continues to be a driving force in our neighborhoods and LOVE Your Park demonstrated community involvement at all levels.” said the Mayor Nutter.

Maitreyi Roy, VP for programs at PHS, said, “We will not only clean and refresh neighborhood green spaces; we will also be planting trees throughout the city as part of the new initiatives to increase the region’s tree Thousands of volunteers from across the Greater canopy. PHS is also proud to announce an ‘Inspiring Philadelphia region rolled up their sleeves to clean, Transformation’ grant, funded by the city’s Office of green, and celebrate Philly’s parks. Volunteers chose Housing &amp; Community Development, for Hart Park from more than 65 project sites all across the park systhat will remove asphalt and add planters to this pocket tem. of urban paradise in Kensington South.”

Bringing New Life To Blighted Kensington, One Seed At A Time

MEMBERS OF Campaign to Take Back Vacant Land celebrate with 7th Dist. Councilwoman Maria Quiñones-Sánchez, under right umbrella. Group built handicap-accessible raised beds to make planting easier for people with disabilities and others with limited movement. In celebration of Earth Day, con- source of fresh, healthy food for environmental enthusiasts are lendcerned citizens did their part to revi- families. Over time, the site will ing hands to support a new initiatalize the neighborhood by taking also be home to more than three- tive, the Campaign to Take Back the first step to transform blighted, dozen new, affordable homes. Vacant Land, by converting vacant land into a thriving commublighted land into spaces that create Local church groups, residents and nity garden that will provide a food, jobs and homes. The cam18 APRIL, 2011

paign started off at a vacant lot at 5th &amp; Norris Streets Saturday morning. Reclaiming blighted land and transforming it into vital community assets creates a source of pride for the neighborhood and promotes stronger, safer communities. Residents, regardless of ethnicity and race, religion, income level, gender and vocation are working together to help their community thrive and succeed. The Campaign to Take Back Vacant Land is advocating for City Council to pass a law making it easier for communities to transform blighted land into thriving community spaces. Additionally, at a time when 70% of children in North Philadelphia neighborhoods are obese, community gardening is an important part of the movement to improve health and well-being of local residents. 6|

MARCELLA SMITH paints tires found on the blighted site. Tires were planted with potato seeds. Food grown on site will be distributed throughout community.

NASHANTA ROBINSON and Mike Head brighten up the lot with fresh coat of paint.

FROM LEFT, Mark Solomon, chairman of CMS Cos., a founder of Arise Academy in Center City; Board President Jill Welsh Davis; student Lanell Dorsey; and State Rep. Jim Roebuck, Democratic chairman of House Education Committee. Dorsey is presenting a folder with information to Roebuck on his visit to school, which is modeled after an Israeli residential school for at-risk children, Yemin Orde. Arise Academy hours are from 7:00 a.m. to 5:30 p.m., aiming to create a home away from home for their students. Photo by Bonnie Squires

Black Police Group Sides With Mayor In Primary The Political Action Committee for the Guardian Civic The League represents 2,500 active and retired AfricanLeague, the local chapter of the National Black Police American Philadelphia police officers, with the retired Association, just announced it is backing Mayor members making up the P.A.C.’s voting members. Michael A. Nutter for a second term. Violent crime last year was down 13% since before the The group cited the Mayor’s leadership in decreasing Mayor took office. Homicides last year were down the rate of violent crime and lowering the prison pop- 22% compared to 2007. ulation, as well as his inclusive governing approach, as In addition, last year’s prison population dropped 10% reasons for its endorsement. from 2009, while the Mayor’s Office of Re-Integration “He’s a visionary for the city,” said Guardian Civic Services for Ex-Offenders posted a 4% recidivism rate League P.A.C. Co-Chairperson Billy Mahoney. “We among the 1,285 ex-offenders who enrolled in its nethave all been able to participate and be involved, and work. Hundreds found permanent jobs. been upgraded in education, housing, jobs and bringing “I am greatly honored to receive the support of the pride back to the city.” Mahoney also praised the Guardian Civic League and to be recognized for the hardMayor’s ability to maintain Charles Ramsey as won improvements in public safety that we – together – Philadelphia police commissioner: “There’s no break have brought to more of our communities,” Nutter said. in what we’re trying to do.”

Henon Enjoys A Kiss From Saidel Bobby Henon, the Democratic Party-endorsed candidate for the 6th Councilmanic seat in Northeast Philadelphia, has picked up the coveted endorsement of former City Controller Jonathan Saidel, who remains an immensely popular and influential political voice in his native Northeast Philadelphia. Saidel cited Henon’s strong moral character and track record of creating jobs as the primary reasons for giving Henon his coveted endorsement. “I have known and respected Bobby Henon for nearly two decades and know him to be a great family man, a man of the highest moral integrity, and a guy who knows how to get things done,” said Saidel. “The residents of Northeast Philadelphia need jobs. As Local 98’s veteran Political Director, I watched Bobby skillfully work both sides of the political aisle to move agendas forward and create jobs, for the betterment of his union and the City of Philadelphia as a whole. I am proud to call him my friend and pleased to offer him my enthusiastic endorsement. The voters of Northeast Philadelphia respect and trust Bobby Henon, and in8|

creasingly look to him to chart a new course for Northeast as its next Councilman. Bobby Henon will serve the people of the 6th Dist. effectively and honorably.” Henon, a lifelong resident of Northeast Philadelphia, was buoyed by the Saidel endorsement, as well as by the results of a recent poll which shows Henon with a commanding double-digit lead over his lone Democratic primary challenger. “I am honored by Jonathan’s endorsement today,” said Henon. “He remains a beloved and respected figure in Northeast Philadelphia. His endorsement is extremely helpful to our campaign and I am personally indebted to him for his friendship and support.” Saidel served as City Controller for 16 years. He is credited with redefining the role of the City Controller, assuming a pro-active, problem-solving activism well beyond the scope of the city charter. He remains the highest vote-getter in the history of Philadelphia.

Rubin Loads Up On Union Endorsements Bill Rubin, the sole candidate for the 10th Councilmanic Dist. in the Democratic primary, speaks of a productive weekend on the campaign trial. “What a weekend....,” he wrote. “Lots of doors, some in the rain, but reception was GREAT! “I received the endorsement of President Bill Hamilton and the Teamsters Saturday morning.(Thank you to Mike Nuggent, Bugsy Wurtenberg, Challie O’Neill and many other friends for all their help and friendship). On Friday, I received the Longshoremen’s Local 1291 and GCC/IBT Council 9 Locals14M and 16N.”

Hamilton as a strategic consultant for federal, State and commercial clients.

SHERRI XANTHOPOULOS RUSSO will be representing Collegeville, Pa. in pageant. 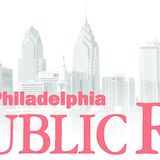