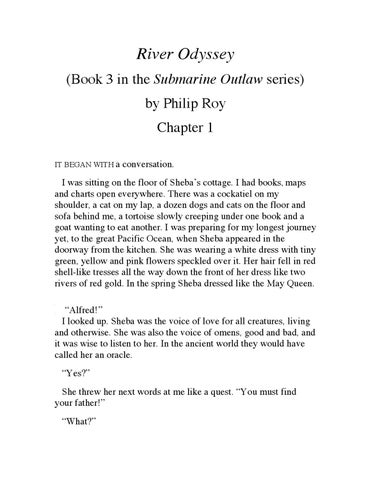 I was sitting on the floor of Sheba’s cottage. I had books, maps and charts open everywhere. There was a cockatiel on my shoulder, a cat on my lap, a dozen dogs and cats on the floor and sofa behind me, a tortoise slowly creeping under one book and a goat wanting to eat another. I was preparing for my longest journey yet, to the great Pacific Ocean, when Sheba appeared in the doorway from the kitchen. She was wearing a white dress with tiny green, yellow and pink flowers speckled over it. Her hair fell in red shell-like tresses all the way down the front of her dress like two rivers of red gold. In the spring Sheba dressed like the May Queen. “Alfred!” I looked up. Sheba was the voice of love for all creatures, living and otherwise. She was also the voice of omens, good and bad, and it was wise to listen to her. In the ancient world they would have called her an oracle. “Yes?” She threw her next words at me like a quest. “You must find your father!” “What?”

The cockatiel flew to the top of the bookcase. The tortoise stuck his head out from underneath the atlas, then pulled it back in. Sheba returned to the kitchen. I was so stunned I didn’t know what to think. I got up, brushed the cat fur from my lap and went to the kitchen. Hollie was curled up on a mat by the door, ready in case I should go outside. Edgar, the kitchen goat, was standing by the stove looking as if somebody had just died, though he always looked that way. Sheba had returned to sit at the table, had thrown on her apron and was peeling onions and garlic. She was peeling slowly and her eyes were watered with tears. “I’m getting ready to go to the Pacific.” “I know, Alfred.” “I’ve never even seen my father.” “I know.” “He . . . he left when my mother died, when I was born.” Sheba looked up with a loving smile beneath onion tears. Her eyes were green like a cat’s and sparkled when they were wet. “I know, Alfred.” I sat down. She was filling two bowls with garlic and onion bulbs. Her garlic was big and her onions were small. Both had been grown and picked right here in the kitchen, Sheba’s hydroponic garden, where it was always summer. Outside, the fog rolled up against the windows. Ziegfried said that Sheba could grow a tomato from a stone. I believed it. I sat and watched her peel, and waited. My two favourite places in the world were Sheba’s kitchen and my submarine. “I dreamt about you last night,” she said finally.

Now I knew I was in for it. If Sheba dreamt about you, you were in for it. “There was a big storm,” she began. I sat up and listened closely. A big storm was no big deal; I had seen lots of those. “And there was a sea monster.” Not so good. “What did it look like?” “I couldn’t see it; I just knew it was there. And your submarine was sinking.” Shoot! “Was the monster pulling it down?” “Yes, I think so. I’m not sure. It’s just that . . .” “What?” “Well . . .” “What? What is it?” “I think maybe the sea monster was your father.” “My father? How could it be my father? And why would he want to sink my submarine? He doesn’t even know me.” “I know, Alfred. I don’t know why. It was him and it wasn’t him.” I didn’t like where this was going. “There was an angel too.” “An angel? What did it look like? Did you see it?” “No. I was waking. She just called out, ‘Alfred!’”

Sheba’s eyes drifted onto the onion she was peeling but I could guess where her mind was. She was twelve the last time she had seen her own father. She turned and looked at me. “And then she said, ‘Forgive.’ But I don’t know if she meant you were supposed to forgive someone else, or ask for forgiveness for yourself.” “Which one do you think it was?” “I don’t know.” “And you didn’t see what she looked like?” “No.” “What did she sound like?” “Kind.” “Why would I have to ask for forgiveness? What did I do?” “I don’t know. Maybe that’s not what she meant. Maybe you’re supposed to forgive somebody else.” “Who? My father?” “Perhaps. The important thing is that you find him. Then you will know.” “But why?” “I don’t know, Alfred, but I don’t dream about angels and sea monsters every night. It is an important dream.” I didn’t like to argue with Sheba. I wasn’t really arguing with her, I was just trying to understand. “But I’m happy.”

“You’re happy now.” “Yes.” “But this dream tells me that something is coming your way. And you need to find out what it is. You can either go out and meet it, or wait until it finds you, but something tells me you’ll be happier if you find it first.” “My father?” “Maybe. Maybe something else.” “Like what?” “I don’t know.” I watched as Edgar dropped his head onto Sheba’s shoulder and waited for her to scratch him. Even as she did, he looked like the world had just ended. That was his nature. He was a goat. I had no intention of going looking for my father. That night, I crawled into my sleeping bag on the floor by the bay window. Hollie dug a trench between my feet and made himself as comfortable as a little dog could, considering he was dwarfed by all the other dogs and most of the cats. During the night a few more warm bodies settled onto the bag, making turning difficult. I couldn’t sleep anyway. The night time was always when my worst thoughts came. That’s what I liked about the sub; we sailed at night and slept during the day. I didn’t want to search for my father. Why should I, when he obviously didn’t want to find me? If he had, he would have. But he never did. If I went looking for him and found him, wherever he was, he probably wouldn’t appreciate it very much. He probably

wouldn’t like me. In fact, maybe he would hate me. Why should I go looking for somebody who might hate me? But a thought was nagging me. What if my father had wanted to find me but couldn’t? What if he was sick or handicapped in some way and was lying in a bed all these years hoping to see his only son? How terrible would that be? No. That was silly. I only thought like that at night when I couldn’t sleep. My father was just busy living his own life somewhere else and never even thought about me and probably didn’t even remember that he had a son in the first place. I needed to roll over in my sleeping bag, but didn’t want to disturb the animals, so I pulled my legs up slowly, turned and slid them back in. I took a deep breath and sighed. Then I felt a tug at my shoulder. I opened my eyes. It was Sheba. In her gentle, songlike voice, as if it were the most natural thing in the world, she alerted me: “Alfred. There’s a ghost on the point.” I jumped to my feet. I had been waiting for this for two years. Sheba’s sightings of ghosts, mermaids, flaming ships and strange creatures from the sea, which I had never seen myself, at least not clearly, yet hated to discredit because I respected her so much, had fascinated me ever since the day we met. Was I finally going to see a ghost for myself? I dressed as quickly as I could and joined her in the kitchen. She said we had to go without a light and leave all the animals in the house. We didn’t want to spook the ghost. “They’re very nervous,” she explained as we shut the kitchen door and tip-toed down the path towards the point. “It won’t stay long.” I was nervous myself. Were we really about to see a ghost? “How did you know there was one here?” I asked.

“I can just tell. It’s a feeling. It wakes me up.” Sheba’s island was probably one of the tiniest in all of Newfoundland. It rose only fifty feet above the tide at its highest point and had a circumference only a little bigger than a soccer field. But her cottage was well protected by rock and its foundation had recently been fortified by Ziegfried. The “point” was the most easterly corner of the island, where the rocks dropped like steps into the sea. Sheba said it was a favourite stopping spot for seals, seabirds, mermaids and ghosts. I followed her down the path. The fog had mostly lifted. It was a good thing I was walking with her and didn’t just stumble into her, because, being a whole head taller than me, with her long flowing hair and flowing skirts, and the forward-leaning gait she had when she walked, she’d be kind of scary to run into in the dark. We came around a corner of the rock and she grabbed my elbow. I stopped. “There!” she said in a whisper. I looked. And I saw it! The ghost was smaller than me. At first, I thought it was just a ball of light, like a reflection of a whole bunch of fragments of light in a mist, but the longer I stared, the more I saw that it had the shape of a man. I didn’t see arms or a face, but it stood with the posture of a person, as if it were deep in thought. My foot made a sound on the rocks and the figure turned. It appeared to be looking at us, and that frightened me. Who knew what a ghost would do? “Don’t go,” Sheba said softly. She wasn’t speaking to me. The ghost bent down over the edge of the water. Was it injured? I wanted to ask Sheba if she thought it was injured, but she held her finger in front of her mouth. The ghost was shaking. Was it hurt? Was it crying? I turned to Sheba and saw a tear run down her cheek. I looked at the ghost. It was

just a ball of light, really, and yet it looked so much like it was crying. I turned to Sheba again; her eyes welled up with tears. When I looked back, the ghost was gone. I never saw it enter the water. I never saw it leave at all. It was there one moment, gone the next. I felt a lump in my throat. The air was so heavy. “Will it come back?” I asked. “No,” Sheba said. “Not tonight.”