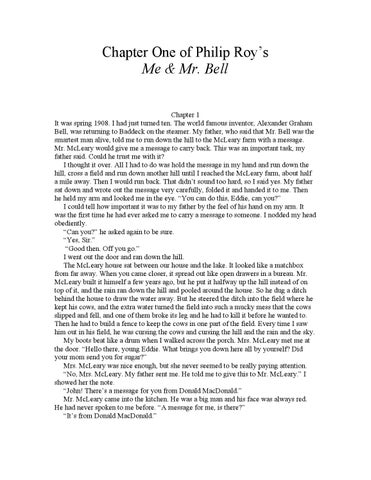 Chapter One of Philip Roy’s Me & Mr. Bell Chapter 1 It was spring 1908. I had just turned ten. The world famous inventor, Alexander Graham Bell, was returning to Baddeck on the steamer. My father, who said that Mr. Bell was the smartest man alive, told me to run down the hill to the McLeary farm with a message. Mr. McLeary would give me a message to carry back. This was an important task, my father said. Could he trust me with it? I thought it over. All I had to do was hold the message in my hand and run down the hill, cross a field and run down another hill until I reached the McLeary farm, about half a mile away. Then I would run back. That didn’t sound too hard, so I said yes. My father sat down and wrote out the message very carefully, folded it and handed it to me. Then he held my arm and looked me in the eye. “You can do this, Eddie, can you?” I could tell how important it was to my father by the feel of his hand on my arm. It was the first time he had ever asked me to carry a message to someone. I nodded my head obediently. “Can you?” he asked again to be sure. “Yes, Sir.” “Good then. Off you go.” I went out the door and ran down the hill. The McLeary house sat between our house and the lake. It looked like a matchbox from far away. When you came closer, it spread out like open drawers in a bureau. Mr. McLeary built it himself a few years ago, but he put it halfway up the hill instead of on top of it, and the rain ran down the hill and pooled around the house. So he dug a ditch behind the house to draw the water away. But he steered the ditch into the field where he kept his cows, and the extra water turned the field into such a mucky mess that the cows slipped and fell, and one of them broke its leg and he had to kill it before he wanted to. Then he had to build a fence to keep the cows in one part of the field. Every time I saw him out in his field, he was cursing the cows and cursing the hill and the rain and the sky. My boots beat like a drum when I walked across the porch. Mrs. McLeary met me at the door. “Hello there, young Eddie. What brings you down here all by yourself? Did your mom send you for sugar?” Mrs. McLeary was nice enough, but she never seemed to be really paying attention. “No, Mrs. McLeary. My father sent me. He told me to give this to Mr. McLeary.” I showed her the note. “John! There’s a message for you from Donald MacDonald.” Mr. McLeary came into the kitchen. He was a big man and his face was always red. He had never spoken to me before. “A message for me, is there?” “It’s from Donald MacDonald.”

I could tell from her voice that that was supposed to mean something, but I didn’t know what it was. Mr. McLeary looked down at me with eyes that reminded me of a cow. They were big, fat and worried. “Well? Where is it?” I raised my arm. He took the message out of my hand and crushed my fingers when he did it. He opened the paper and frowned hard and squinted. “What does it say?” I swallowed hard. I didn’t know what it said; I only knew it was about Mr. Bell. Mrs. McLeary peeked over his shoulder. “Ah, he’s askin’ about Mr. Bell. When he’s comin’.” “When he’s comin’?” I nodded now that I knew what it was about. Mr. McLeary looked at me as if I was the one who had written the message. “He’s comin’ tonight!” “He knows he comin’ tonight, John,” said Mrs. McLeary. “He wants to know what time he’s comin’.” Mr. McLeary frowned even more. “He’s comin’ at eight! Tell him he’s comin’ at eight.” “You’d better write it down, John. The lad might not remember it right.” Mr. McLeary held his breath and turned a shade of purple. “What’s to remember? He’s comin’ at eight!” “Write it down, John.” “Ah, lordy!” He fumbled around in his overalls until he found a short pencil, then handed it to me. “Here! Write this down. He’s comin’ at eight!” I stared up at him. Did he mean for me to write it? “Write it!” he barked at me. “He’s comin’ at eight!” He pulled at his suspenders and turned away. Mrs. McLeary was busy in the kitchen. I felt awkward standing there by myself. “Did your mom send you for sugar, Eddie?” I turned and looked over at her. Mrs. McLeary was kneading dough for bread, and her head was down. She had already asked me that, and I had answered her. I didn’t know if I should answer again. “No, Mrs. McLeary, my father—” “Oh, that’s right. Did you write it down?” “Not yet, Mrs. McLeary.” I held the paper in my left hand and the pencil in my right. I would rather have used my left hand to write because my left hand was better at everything, but I couldn’t. You weren’t allowed to write with your left hand. You could hold things with it, carry things with it, eat and comb your hair with it, but not write with it. I didn’t know why. On the paper, my father’s handwriting looked beautiful, like waves in the lake when it’s windy and the water curls a million times the same way, except every now and then there was a fancy shape, as if a seal had stuck its head out of the water, spun around in a somersault and dove back down. The look of my father’s handwriting made me feel proud of him. I knew Mr. Bell was coming at eight, so I figured I wouldn’t have to write out the whole sentence. I could just write the word eight. But for some reason I had a really hard time remembering how to spell words. In my head, it was as clear as could be. I just thought of the number eight and I knew what it was – eight cows, eight trees, eight apples, eight people – eight was exactly eight, and I knew that as perfectly as I knew

anything. The problem was when I tried to write it down. Something got in the way in my mind, and I felt confused and had to concentrate really hard for the simplest thing. I didn’t know why that was, and I never told anybody. I avoided writing as much as possible. But I did remember something important about the number eight that we had learned in school, that it didn’t have the letter a in it, even though it sounded like it did. It had an e. I always thought that was strange. I also knew it had a t in it. So, I put those letters down. But I wasn’t sure what else went in it. Something told me there was an h too, so I made an h. But I always confused h with n because they looked the same to me the way my teacher wrote them, except that one of them had a longer stick than the other. I just couldn’t remember which one. “Are you done?” said Mrs. McLeary. “Your father will be waitin’ on you. You’d better scoot.” “Okay.” I handed the pencil to Mrs. McLeary, went out the door and ran back up the hill. My father was waiting. He took the note from my hand, read it and stared at me. “You gave it to Mr. McLeary, did you?” I nodded. “And this is all he gave you back?” “Yes, Sir.” “Well, he’s a man of few words, isn’t he?” I just stared at my father. I didn’t know what to say. I didn’t know how to explain everything the way it happened at the McLeary house. “Okay then, Eddie. Thank you. Sweep the barn before dark, will you?” “Yes, Sir.” I went into the barn, picked up the broom and started sweeping. I enjoyed sweeping the barn clean. It gave me a feeling of satisfaction. I was feeling especially happy this night because I had run an errand for my father successfully. It made me feel smart. It didn’t last long.

Me & Mr. Bell Chapter One

This is the first chapter of Philip Roy's children's historical novel, Me & Mr. Bell.

Me & Mr. Bell Chapter One

This is the first chapter of Philip Roy's children's historical novel, Me & Mr. Bell.