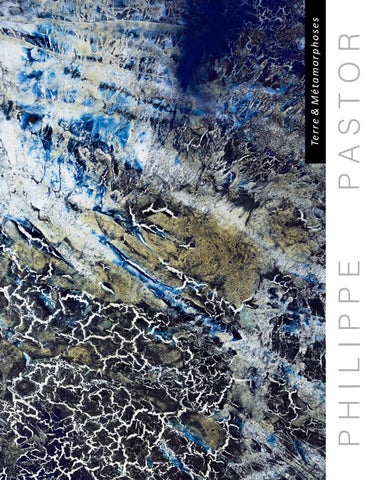 Indeed, Philippe Pastor uses specific natural pigments, especially in the case of the Monochrome Blue paintings. This Mediterranean series is elaborated from pigments that the artist fetches in the isolated villages of Mount Atlas in Morocco. He sometimes mixes elements from nature, such as leaves or pine needles, and submits them to the same stratification process. The work from the Monochrome series presented here is particularly evocative of this approach. Patiently elaborated from multiple natural elements it evokes an abundant and fertile nature, like the soils of a primary forest.

Monaco Modern’Art Gallery, in collaboration with the association Art &amp; Environnement, presents a selection of monumental paintings by Philippe Pastor together with original sculptures of The Burned Trees. These sensitive pieces, conceived as a tribute to Nature, also denounce the current environmental is- In dialogue with these large canvases stand the sues, in the era of what some call the Anthro- sentinel figures of another wounded nature, The Burned Trees. This series of sculptures, inipocene. tiated in 2003 following the devastating fires of the Massif des Maures, today echoes the reThree large paintings of the series Avec le cent Californian tragedy. If the first works were Temps, gathered for the occasion, form impo- directly carved in the trunks of the bruised fosing lyrical abstract compositions which evoke rest, the latest series offer raw versions, made the unleashing of the elements. Natural chaos, of calcined wood, such as those recently insstorms, tornadoes, these paintings refer here talled outdoors in the Gulf of Saint-Tropez. In to recent tsunamis and hurricanes. The lines the gallery, the artist proposes here an immuof force that cross the canvas, highlight the table version, cast in bronze. Thanks to this process of creation of the artist, who works noble alloy Philippe Pastor offers an admirable on large surfaces, on which he applies, throws reproduction of the details and asperities of or delicately affixes the material. Leaning over the material having undergone the assaults of the canvas, « in » the canvas, Philippe Pastor fire. apprehends it in the manner of the American abstract expressionists working with action Fires, at the origin of dramatic forest destrucpainting. He becomes one with the matter. The tions, are four times out of five provoked by lines and the energy that emanate from them the hand of Man, whose responsibility is deare similar to the energetic fluxes of the Earth, nounced by the artist. This approach, which to the meteorological flows subjected to in- also can be found in the paintings presented, is more widely related to the particularly cricreasingly contrasted climatic changes. tical environmental and social context nowaAvec le Temps also bears in its title a very impor- days, in the era of the Anthropocene, global tant notion in the work of the artist, that of « warming, looting of natural resources, invatime ». The time of creation, of the artist’s ges- sive pollution and rising water levels. ture, but also the natural time of drying multiple layers, the time of alteration and patina. The matter gets transformed into earth crust, Spring-Summer, 2019 made up of multiple stratas, patiently created by the artist and sometimes crystallized by fire. This electric matter, which vibrates on the surface of the canvas, owes its intensity to the choice of materials.