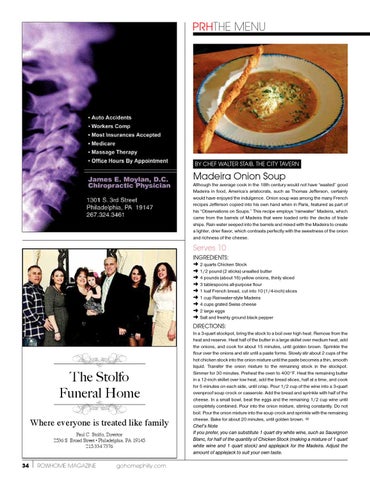 Although the average cook in the 18th century would not have “wasted” good Madeira in food, America’s aristocrats, such as Thomas Jefferson, certainly would have enjoyed the indulgence. Onion soup was among the many French recipes Jefferson copied into his own hand when in Paris, featured as part of his “Observations on Soups.” This recipe employs “rainwater” Madeira, which came from the barrels of Madeira that were loaded onto the decks of trade ships. Rain water seeped into the barrels and mixed with the Madeira to create a lighter, drier flavor, which contrasts perfectly with the sweetness of the onion and richness of the cheese.

In a 3-quart stockpot, bring the stock to a boil over high heat. Remove from the heat and reserve. Heat half of the butter in a large skillet over medium heat, add the onions, and cook for about 15 minutes, until golden brown. Sprinkle the flour over the onions and stir until a paste forms. Slowly stir about 2 cups of the hot chicken stock into the onion mixture until the paste becomes a thin, smooth liquid. Transfer the onion mixture to the remaining stock in the stockpot. Simmer for 30 minutes. Preheat the oven to 400°F. Heat the remaining butter in a 12-inch skillet over low heat, add the bread slices, half at a time, and cook for 5 minutes on each side, until crisp. Pour 1/2 cup of the wine into a 3-quart ovenproof soup crock or casserole. Add the bread and sprinkle with half of the cheese. In a small bowl, beat the eggs and the remaining 1/2 cup wine until completely combined. Pour into the onion mixture, stirring constantly. Do not boil. Pour the onion mixture into the soup crock and sprinkle with the remaining cheese. Bake for about 20 minutes, until golden brown. ✻ Chef’s Note If you prefer, you can substitute 1 quart dry white wine, such as Sauvignon Blanc, for half of the quantity of Chicken Stock (making a mixture of 1 quart white wine and 1 quart stock) and applejack for the Madeira. Adjust the amount of applejack to suit your own taste. 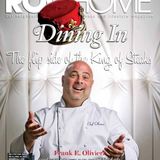