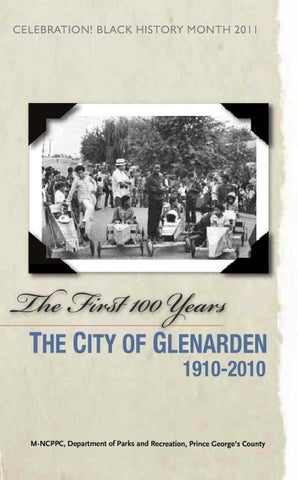 hat began as an enclave for African Americans outside of the nation’s capital has developed into a vibrant community with an appreciation for history, family and recreation. Early citizens of Glenarden banded together and formed a local government that moved to modernize the community and support the growing population. By 1939, Glenarden had become the third African American incorporated town in Prince George’s County. Led by the second elected and longest serving mayor, James R. Cousins, Jr., the town established neighborhoods, businesses and services to benefit the community. During the mid-1960s, Glenarden was the first town in the county to begin the process of remodeling with the help of the Federal Urban Renewal Program. While the federal government helped fund the projects, many Glenarden residents were active in the process. Anthony Johns, one of Glenarden’s own, was the architect of many of the new buildings. Throughout most of Glenarden’s history, residents organized parades, sporting events, cookouts, sponsored balls and other family-oriented activities. Glenardeners participated in organized sports leagues, and developed the Glenarden Track Club, a nationally-recognized track team. Glenarden resident G. Van Standifer originated the concept of Midnight Basketball, which was quickly replicated in cities throughout the country.

At left, City of Glenardenâ&#x20AC;&#x2122;s seal, an updated version of the town seal, was used after the town was designated a city in 1991. Courtesy of Jean Key

In its early years, the town was comprised of mostly farmland divided into two subdivisions, Glenarden and Glenarden Heights. As the population grew, the residents created the Glenarden Civic Association (GCA) to “encourage and to foster community pride and ambition.” Following the lead of other African American towns Fairmount Heights and North Brentwood, the GCA mounted a campaign to incorporate Glenarden. On March 20, 1939, Glenarden received its town charter, and W. H. Swann was elected the first mayor. In 1941, James R. Cousins, Jr. was elected Mayor of Glenarden. Cousins’ first major action was to pursue the construction of a municipal hall. The town saw further development after Cousins petitioned the Washington Metropolitan Area Transportation Bus Company to begin bus service between Glenarden and nearby Seat Pleasant.

In 1956, Mayor Cousins supervised the process of merging Ardwick Park No. 2 and Glenarden Woods into the Town of Glenarden. In 1962, Glenarden annexed a land parcel known as Fox Ridge. Through this annexation the town doubled in area and saw its population grow to 5,000.

In 1942, James R. Cousins, Jr. was appointed by Maryland Governor Herbert R. O’Connor to serve as Captain of the 937th Company of the Maryland Reserve Militia. Members of the militia were residents of Glenarden and nearby communities, such as McCarthy and Vista. Courtesy of Raymond Smith

Religion eligious life helped shape the founding and development of Glenarden. The two most prevalent faiths in early Glenarden were Catholic and Baptist. Established to serve the growing African American population of Glenarden and surrounding areas, St. Joseph’s Catholic mission was formed in 1921. With an ever-growing congregation, St. Joseph’s Catholic Church built a new place of worship and a rectory on Landover Road in 1942.

Two years after the Catholic mission was formed, Reverend I. A. Patterson organized the First Baptist Church in Glenarden. In 1956, Reverend John W. Johnson of North Carolina became the pastor, and served until his death in 1988. To meet the needs of the growing congregation, the church moved to a larger facility designed by local architect Anthony Johns in 1972. Reverend J. K. Jenkins, the current Senior Pastor, has served since 1989. In 2007, the congregation moved to a larger church in Upper Marlboro; however the First Baptist Church of Glenarden maintains outreach ministries and administrative offices in Glenarden. The religious community of Glenarden has grown to include several other churches including Glenarden Church of Christ, Shiloh Baptist Church and Christ Mission Church. Program from installation services of Reverend John W. Johnson at First Baptist Church of Glenarden in 1956. Courtesy of Reverend Robert Johnson

Business s the town grew, local entrepreneurs started businesses to meet the needs of residents. Several enterprising residents operated home-based businesses and storefronts which included carryout shops, barber and beauty shops, a tavern, a grocery store and other services. As local businesses were established, the community then focused its efforts on gaining commercial and industrial businesses.

Raymond Smith and other barbers outside his barber/beauty shop complex in Glenarden, ca 1980. Courtesy of Raymond Smith

Receipt for $6.07 for towels Raymond Smith purchased for his barbershop from the ABC Linen Service, ca 1980. Courtesy of Raymond Smith

Recreation or Glenarden residents, access to a variety of recreational activities was an important aspect of a safe and happy childhood. To this end, the townspeople generously donated their time and money to many local projects including construction of the townâ&#x20AC;&#x2122;s recreation center in 1954, and another in 1972. Glenarden residents continued to raise funds for the construction and purchase of playground equipment at other recreational facilities including Martin Luther King, Jr. Recreation Park.

In 1977, the Glenarden Community Center was built by The MarylandNational Capital Park and Planning Commission. The 31-acre site included a community center and swimming pool complex, picnic areas and a lighted ballfield. Located near the town hall, the community center was the site of many community activities, including the annual Glenarden Day. It was also used for many of the activities offered by the Glenarden Boys and Girls Club including basketball, baseball, track, cheerleading and football.

Board members of the Glenarden Boys and Girls Club seated at an awards ceremony, ca 1970. Courtesy of Edward and Florid Brown

DeHavine Brown receives an award for his achievements on the Glenarden boys football team, ca 1970. Courtesy of Edward and Florid Brown

Baseball frican American towns throughout the county formed sandlot baseball teams that competed on a weekly basis. Attending games generated a sense of pride and entertainment for the entire community. The residents of Glenarden and area businesses supported the Glenarden Braves, a semi-professional sandlot team. The community banded together to raise money to pay for uniforms, supplies and other expenses.

In addition to its semi-professional sandlot team, Glenarden was also home to baseball teams sponsored by the Boys and Girls Club. The Glenarden Topspotters was an early girls softball team. By the 1970s the club sponsored several teams that competed against other teams throughout the region.

Glenarden Braves in the dugout at the Vista Yankees Stadium, ca 1950. Courtesy of Reverend Robert Johnson

Track mong organized sports in Glenarden, track had one of the greatest impacts on the daily lives of residents of all ages. After years of activity, the Glenarden Track Club (GTC) has put together an effective combination of an award-winning coaching staff, and an active booster club of parents and volunteers. The team includes about 300 talented track members, from age nine to seniors, all working, training and winning at a premier training facility. In 1994 GTC had the largest qualifying team from its area in the USA Track & Field (USATF) Junior Olympic competition. Many of its award-winning members who have professional careers in sports as athletes and coaches attribute their success to the training they received as members of GTC.

The Glenarden Track Club, originally the Dellwood Avenue Striders, was organized as a summer program in 1983 by Larry Colbert, Sr. for his son Larry, Jr. and neighborhood children Lamont Seller, Ernest Kinard, Shannon Marshall and Douglas Jackson. Within four years the club had 20 members and became affiliated with the Glenarden/Ardmore Boys and Girls Club. Competing in regional, national and international meets, the team quickly grew to include over 200 members from across the metropolitan area. It reorganized again in 1987 as a nonprofit under the name of Glenarden Track Club.

Coaching staff of the Glenarden Track Club confer with an official just prior to the Junior Olympics USATF National Championships at San Jose City College in San Jose, California, 1995. Courtesy of Larry Colbert

The original members of the Glenarden Track Club, the Dellwood Avenue Striders, 1983. Courtesy of Larry Colbert

Soapbox Derby rom the 1930s through the 1970s, soapbox racing was a popular American pastime for young boys and their fathers. Throughout the year, they would collaborate on designs and construct wooden cars that would coast downhill in hopes of beating fellow racers. The Glenarden 500 began in the early 1950s and became a favorite pastime in the community. The annual race was held each fall until the mid-1970s. While the sport was dominated by boys, in 1971, Donna Key became the first and only girl to win first place and best in show.

Participants in the Glenarden 500 lining up along Glenarden Parkway, ca 1970. Courtesy of Jean Key

Midnight Basketball ormer Glenarden Town Manager G. Van Standifer developed the idea of Midnight Basketball, an innovative program that offered young men the opportunity to play organized sports during summer evenings when they were most likely to get into trouble. Players were required to attend weekly practice, educational workshops and vocational counseling. Within a few years, other municipalities throughout the nation formed their own leagues.

One of the members of the Midnight Basketball League speaking with President George H. W. Bush at Glenarden Community Center, 1991. Courtesy of Martha Standifer

Mardi Gras n Glenarden, the tradition of celebrating Mardi Gras started in the late 1970s. The event was sponsored by the Glenarden Recreation Council and suggested by Council Member Marvin Wilson, whose wife Verly is a native of New Orleans, Louisiana. Festivities included a parade during the day and a masquerade ball in the evening. The highlight of the event was the crowning of the King and Queen of the Ball who were selected based on service in the community. For more than a decade the Town of Glenarden invited residents and neighbors to celebrate this event.

Urban Renewal in Glenarden n the 1960s under Mayor James Cousins, Jr.’s leadership, the Town of Glenarden began to make major changes to its landscape. With the approval of the Glenarden Housing Authority, the U.S. Public Housing Authority constructed a 90-unit public housing project, and began an urban renewal program for the city.

Mayor Decatur Trotter’s administration continued the program, and the town increased its public housing, added two recreation centers and implemented plans for a community administration building with a “tot lot.” In 1970, 32 more public housing units were constructed, with 16 of the units reserved for the elderly and disabled. The next year a recreation center was constructed on a 10-acre lot on McLain Ave. Martin Luther King, Jr. Recreation Park was the second center and was located on the 2-½ acre lot left vacant when St. Joseph’s Catholic Church moved to Landover Road. In the 1980s and 1990s, new developments and retail centers were built throughout the town. In 1983, the newly constructed Washington Commerce Center was annexed by the town along with the Carrollton Station subdivision that contained 200 townhouses. Another annexation in 1985 increased the town’s land holdings by 245 acres, almost doubling the size of the community.

Preserving a Heritage he residents of Glenarden created a variety of ways to preserve and celebrate their history and traditions. Backyard cookouts for family and friends, neighborhood block parties and family reunions were regular features of community life. Special committees were created to plan celebrations for major milestones in Glenarden’s history. Commemorative books have been produced that celebrate the 10th, 25th and 50th anniversaries of the town’s incorporation. One of the largest celebrations in the town’s history was its 50th anniversary, which included a parade, ball and an awards ceremony for citizens. Residents who worked on the 50th anniversary project and others with similar goals later formed the Glenarden Historical Society. Descendents of the municipality’s early settlers formed the Glenarden Pioneers who celebrate the town’s history and the lives of its residents. Through organizations like these, residents have created avenues to preserve Glenarden’s heritage and pass it on to future generations.

Glenarden Pioneers at one of their many annual picnics, ca 2005. Courtesy of Michael Marshall