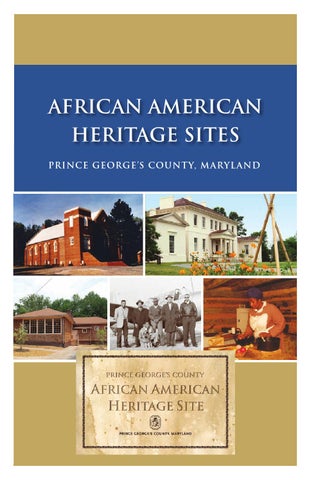 or over 300 years, African Americans have raised families and built communities that have been vital to the growth and development of Prince Georgeâ&amp;#x20AC;&amp;#x2122;s County, Maryland and its history. They have established neighborhoods and built physical structures, many of which have survived in the midst of the Countyâ&amp;#x20AC;&amp;#x2122;s ever changing landscape. This guide invites you to take a visual journey to those African American historic sites and buildings that offer guided or selfguided tours.

Discover the richness and diversity that Prince Georgeâ&amp;#x20AC;&amp;#x2122;s County has to offer! A brief history describes the origins, functions and architectural style of each site and its historical development as a county landmark. The sites range from a benevolent hall to churches, from an airfield to a ball field and from historic mansions to a log cabin. They provide tangible evidence of the importance African Americans placed on family, religion, education, neighborhoods and community. Take a closer look at the buildings and sites associated with African Americans that have been overshadowed by grander buildings with extensive landscapes. On a comfortably paced tour that you design, you can engage these sites on their own terms and develop a deeper appreciation for buildings, places and neighborhoods that frequently receive only a passing glance. To learn more about these and other African American sites and the communities listed on the map within this guide, call 240-264-3415 or e-mail gail.thomas@pgparks.com.

Abraham Hall 7612 Old Muirkirk Road, Beltsville, MD 20705 240-264-3415 / history.pgparks.com Weekday tours by appointment Built in 1889 for the Benevolent Sons and Daughters of Abraham, Abraham Hall is the County’s most outstanding example of a late 19th century African American benevolent society lodge. Over the years, it has also served the African American community of Rossville as a temporary schoolhouse and Methodist church. Abraham Hall is home to M-NCPPC’s Black History Program.

Belair Mansion 12207 Tulip Grove Drive, Bowie, MD 20715 301-809-3089 / www.cityofbowie.org Tours: Wed-Sun from 12 noon – 4 pm Groups by appointment Belair Mansion was built circa 1747 and served as the home of Provincial Governor Samuel Ogle. Ogle’s Georgian mansion was the focal point of a large plantation, that depended on the labor of enslaved Africans. The mansion’s interpretative effort offers a contrast between the lives of the plantation’s owner and its slave population. An exhibit in the Belair Stables highlights the significant role of 19th and early 20th century African American jockeys.

Blacksox Park 2200 Mitchellville Road, Bowie, MD 20716 301-262-6200 / www.cityofbowie.org Self-guided with signage March 1-November 30 This 70-acre park has five fields and was once home to the Mitchellville Tigers and the Washington Blacksox, two local African American sandlot baseball teams from the 1930s to the 1970s. Other African American sandlot teams, such as the Brentwood Flashes, Laurel All-Stars and Glenarden Braves also played here. The Homestead Grays, a professional Negro League team, played the Washington Blacksox at the field.

Columbia Air Center 16000 Croom Airport Road Upper Marlboro, MD 20772 301-627-6074 / history.pgparks.com Self guided with signage; daily, dawn to dusk The first black owned and operated airfield in the state of Maryland was licensed in 1941 on this site. John W. Greene Jr., a pioneer in black aviation was instrumental in developing the airfield which was originally called Riverside Field. It was occupied by the U.S. Navy during World War II for training missions. After the war, the airfield reopened as Columbia Air Center, offering a flying school, charter services and a maintenance shop. The first black Civil Air Patrol Squadron in the Washington, D.C. area, called the Columbia Squadron, was formed here.

Dorsey Chapel 10704 Brookland Road, Glenn Dale, MD 20769 240-264-3415 / history.pgparks.com Weekday tours by appointment Dorsey Chapel is an excellent example of the small frame, meetinghouse-style church that was the focal point of the rural African American community of Brookland. Constructed in 1900, the one-room chapel was used until 1971, when the congregation merged with Perkins Chapel to form the Glenn Dale United Methodist Church. M-NCPPC acquired the vacated and deteriorating chapel in 1992 and fully restored it. It was opened to the public for tours and rentals in 1996.

Poplar Hill on His Lordship’s Kindness 7606 Woodyard Road, Clinton, MD 20735 301-856-0358 / poplarhillonhlk@gmail.com Call or email to request a tour. www.poplarhillonhlk.com Poplar Hill on His Lordship’s Kindness was part of a 7,000-acre land grant from Charles Calvert to Colonel Henry Darnall in 1703. The current mansion was built between 1785 and 1787 by the Colonel’s great grandson, Robert Darnall, replacing an earlier residence constructed for his father, Henry Darnall III. The site interprets the history of the enslaved African Americans and their families that remained in the area after emancipation.

Prince George’s County, Maryl and Queen’s Chapel Methodist Episcopal Church Site and Cemetery 7410 Old Muirkirk Road, Beltsville, MD 20705 301-210-9038 The original church was a small log cabin built in 1868, and included a cemetery that was already being used by African Americans in the Muirkirk area. The chapel was replaced by a brick church that stands on the opposite side of the road. The site of the original chapel is now the cemetery of Queen’s Chapel United Methodist Church. The oldest inscribed gravestone dates back to 1886.

Ridgely Methodist Episcopal Church and Cemetery 8900 Central Avenue, Landover, MD 20743 301-336-1219 Ridgely Church is bordered by a small graveyard with handsome and simply carved stones. The church was constructed in 1921. It replaced the original church built by Lewis Ridgely in 1871 after it was destroyed by fire. Succeeding generations of Ridgleys remained active in the church and community. When Central Avenue was widened, the church was moved and renovated.

Ridgeley Rosenwald School 8507 Central Avenue, Capitol Heights, MD 20743 240-264-3415 / history.pgparks.com Wed: 10 am-2 pm; fourth Sunday 1-4 pm Group tours by appointment Ridgeley School opened in 1927 as Colored School No. 1 in Election District 13 and was located in central Prince George’s County in the African American community of Ridgeley. A recipient of a Rosenwald Fund grant, the school was one of nearly 5,000 Rosenwald Schools built in the south for African American children.

Riversdale House Museum 4811 Riverdale Road, Riverdale Park, MD 20737 301-864-0420 / history.pgparks.com Visitor Center: Mon- Fri: 9 am-5 pm; Sun: 12 noon-3:30 pm Museum: Fri &amp; Sun: 12 noon-3:30 pm Riversdale, the early 19th century home of George Calvert and Rosalie Stier was a large estate where up to fifty-two enslaved African Americans labored over the years. The museum houses an exhibit of Adam Francis Plummer, a slave who came to Riversdale in 1829. His 1841 diary provides a rare, personal account of life as a slave on a Prince George’s County plantation. An exhibit in the Visitor Center on Plummer and his family focuses on their role in the community after emancipation.

St. Mark’s Methodist Church 601 8th Street, Laurel, MD 20707 301-776-8885 The history of St. Mark’s Methodist Church dates back to 1891 when James Hebron and two other black Methodists purchased the land for the church. The frame of the church (Hebron Hall) sat across the street from the Laurel Colored School. A new building was constructed in 1921, and Hebron Hall was moved and converted into a social hall. The church was further expanded during the 1940s and represents the religious center of a long-standing black community.

St. Paul’s United Methodist Church 6634 St. Barnabas Road, Oxon Hill, MD 20745 301-567-4433 St. Paul’s United Methodist Church is thought to be the oldest black congregation in Prince George’s County. The congregation acquired the land on which the church was built in 1867. The original church was a Methodist meetinghouse built in 1888. A new sanctuary was built in 1915 and was enlarged after the destruction of the original building in the 1920s.

The Department of Parks and Recreation encourages and supports the participation of individuals with disabilities. Register at least a minimum of two weeks in advance of the program start date to request and receive a disability accommodation. PAMD 8/13 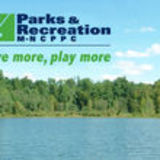